Aisha Al Muhairi .. The first Emirati woman to qualify for the "Paralympic Shooting"

Paralympic shooting star Aisha Al Muhairi, player of the Dubai Shooting Club, achieved a historic achievement yesterday, by qualifying for the Paralympic Games (Tokyo 2020), as the first Emirati player in the history of shooting for people of determination to reserve her place in the Paralympic Games. This came after I registered a number 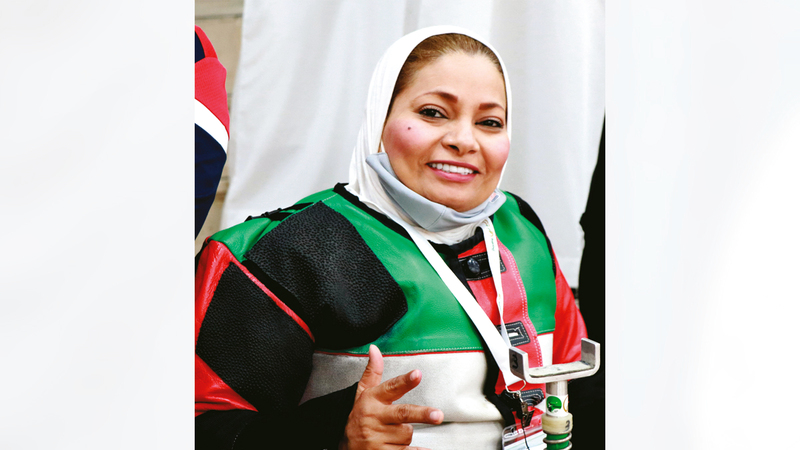 Aisha Al Muhairi .. The first Emirati woman to qualify for the "Paralympic Shooting"

This came after she set a new personal record (628.6) in the R4 category in the 10m standing air rifle competition, during her participation in the World Shooting Championship held in Lima, the capital of Peru, to record this distinction, and hit the goal 71 days before the start of the upcoming Paralympic event in Tokyo. Emphasizing that women's sports in the country is on the right path, and is taking steady steps to achieve its ambitions in all fields.

This achievement opens the door wide for female shooters of determination, after Aisha entered history as the first girl to knock on the Paralympic door.

In a press statement, Aisha Al Muhairi dedicated the achievement to the wise leadership, the people of the Emirates and every Emirati woman, thanking the Dubai Club for People of Determination for providing her with all the factors of excellence, noting that being in Tokyo represents her a source of pride and pride, especially since her shooting career did not exceed a year. And half a year.

For his part, the player’s coach, Muhammad Hussein, confirmed in a press statement that Aisha participated in the standing rifle shooting, which is the most difficult in a strong tournament, especially as she is the only girl who qualified out of 30 players in this competition to the final, to achieve her dreams in the game after she turned From boccia to archery.

The delegation of the UAE Knights Team in the World Cup in Lima was represented by Muhammad Al Jallaf, Aisha Al Muhairi, Abdullah Al Ahbabi and Obaid Al Dahmani, in addition to Saeed Al Balushi, headed by Abdullah Al Kamali.

The Secretary-General of the UAE Paralympic Committee, Theban Al Muhairi, said that qualifying is historic, and everyone is happy with this achievement, stressing his confidence in the ability of the Knights of Will shooting players to represent the honorable and preserve the great Emirati reputation in shooting competitions.

Aisha Al Muhairi confirmed: “The secret of my success is my confidence in my country and myself and my mother’s prayers, which qualified me to achieve this achievement after I succeeded in overcoming my disability with determination and challenge, as I set a goal for this, and I dreamed of reaching the Paralympic Games, especially that the UAE girl is always on time. And as much as the challenge and responsibility, I look forward to raising the UAE flag in this important Paralympic event.”

He said that this achievement reflects the great attention paid by the wise leadership to the category of people of determination, and the keenness of His Highness Sheikh Mansour bin Mohammed bin Rashid Al Maktoum, Chairman of the Dubai Sports Council, to support and support this important group in society, which had a positive impact during the march of these players.

For his part, Chairman of the Board of Directors of the Dubai Club for People of Determination, Thani Jumaa Belrakad, said in a press statement: “We had greater goals than expected, because we bet on an element that loves challenge and overcomes it, and so were our children, and here is Aisha Al Muhairi walking on the same approach and achieved in a time Shorter of her practice of this game than what is expected of her, as the first shooter to represent the Emirates in Tokyo.”

For his part, the Chairman of the Asian Paralympic Committee and Executive Director of the Dubai Club for People of Determination, Majed Al-Osaimi, confirmed that the determination and determination of the heroine Aisha were the key to this historic qualification, which was recorded for the first time in the history of the UAE Paralympic sports.

Member of the Board of Directors of the Dubai Club for People of Determination, Director of Sports Department, Hassan Al Mazrouei, said that the historic achievement is the result of the support of the wise leadership, which had a positive impact on the march of the "People of Determination" in the country.

• The achievement came through the R4 category in the 10 standing rifle competition.

• She achieved a great achievement in a short period of time from playing the game, which did not exceed a year and a half.

• 5 of the "Knights of the Will" represent the UAE in the World Cup in Peru, they are Muhammad Al Jallaf, Aisha Al Muhairi, Abdullah Al Ahbabi, Obaid Al Dahmani and Saeed Al Balushi.