There is nothing propagandistic about the favoritism of France. Its superiority is at times so manifest that it was only necessary to attend its inaugural deployment in Munich to ... 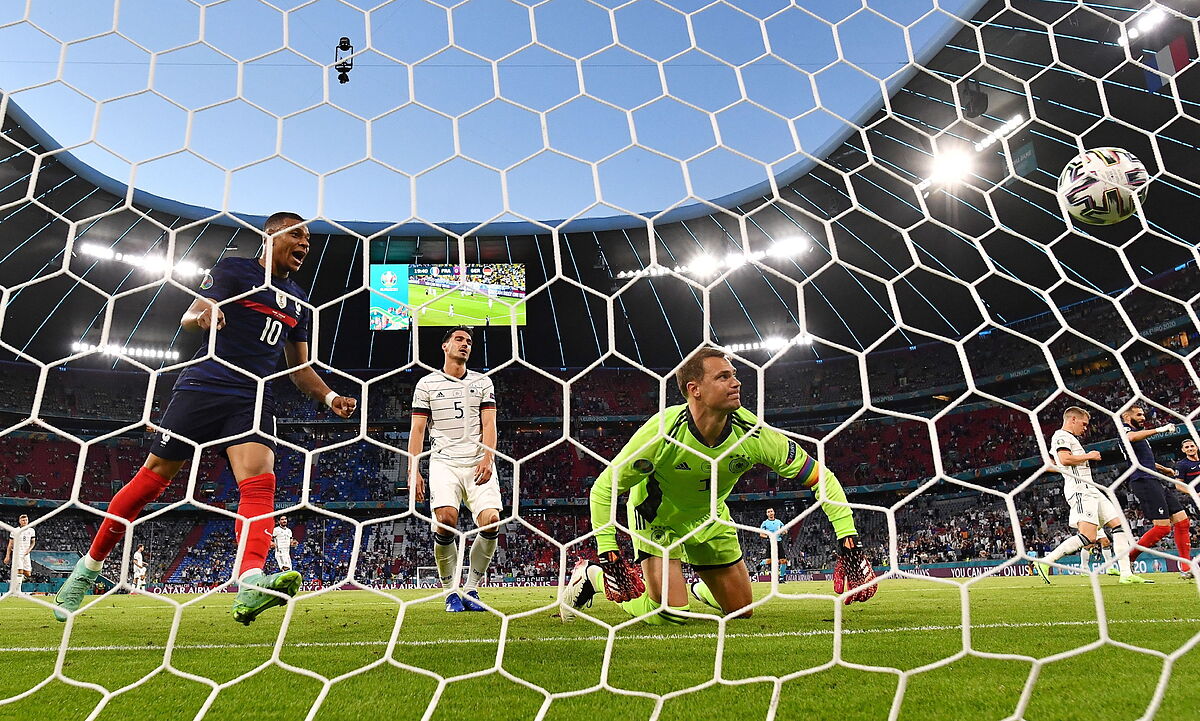 There is nothing propagandistic about the favoritism of France. Its superiority is at times so manifest that it was only necessary to attend to its inaugural deployment in Munich to confirm that there are hardly any defects on which to create a fable. Physically it is a marvel like no other. Tactically,

denies loopholes and promotes escapades. And technically, you just have to be distracted by the dancer's feet of the forgiven

, in the sliding step of

or in the tap dance of

, who, like the Real Madrid striker, had a beautiful goal annulled from outside play. The

That yes, they had to be used thoroughly to defeat a Germany that denied its surrender as much as it could, and that spent the game attacking, although punishing the absence of a finisher. The match was monumental.

To better understand what differentiates France from Germany, you might want to look at who scored the first goal of the night.

Its author, although on his own doorstep, was

came to retire with

, but that the German coach still decided to recover because he understood that the generational change did not quite measure up.

(35), all of them starters in the German premiere of this European Championship, played at the beginning of the World Cup final in Brazil in 2014. La

he still needs to live from the past in the face of a footballing present that has its most distinguished representative in France.

These nights are also written from cursed memories. And France was piling them up during those 58 years when every confrontation with Germany ended in torture and depression. The concussion, the broken vertebra and the two missing teeth by

after being devastated by the boastful

in Spain 82. The party with the hanging leg of

in the Mexican Guadalajara in Mexico 86. Or the crocodile tears of Griezmann in Brazil 2014. A diabolical trend against Germany that the Little Prince, blessed football, put an end to in Marseille at Euro 2016. Since then, Germany has been unable to overcome an enemy of historical and dramatic tradition. And there it continues.

Löw, disoriented, began to lose the duel when he decided that

, one of the best midfielders of his generation, should be a winger in the same band for which Mbappé would strike.

It is one thing to put Kimmich on the back in a defense of four so that he evolves in interior zones.

Another very different thing is to catch him in the lime because the coach on duty insists on the fashion of the three centrals.

in the face with his boot

Germany had been left with the ball, but also without football.

The banks did not exist.

lived a torment before the wall erected by

Filtering an inside ball was completely impossible.

did not make the task much easier

After a warning from Mbappé, uncontrollable by Kimmich, and another from Pogba, it was precisely the Manchester United midfielder who opened the German defense with Lucas Hernández as destination.

The winger put the ball in the heart of the area and Hummels, scared to death with Mbappé at his back, ended up getting the ball into his goal.

Although if something has Germany is a lot of self-love.

Germany could not get water from the well with

And France ended the match under cover, WITH Griezmann overwhelming the rivals as a double winger and Mbappé running like mad in frenzied transitions.

Hummels must still be wondering how he managed to snatch the ball from him without committing a penalty in a definitive-scented action.

And a last triangulation between Pogba, Mbappé and Benzema was left without a prize for offside.

They will say that this granite France lives off the backlash.

Who delivers the ball and prays to attack space.

What difference does it make.

Beauty does not always have to be normative.

EurocupBenzema, after his talk with Deschamps: "In three minutes, everything went back to the way it was before"