Fight against Syria again! Can the national football team that qualify after a tie break the curse?

Chinanews client, Beijing, June 15th (Bian Liqun) After more than a year and a half, in the final round of the World Preliminary 40, which started at 2:00 am Beijing time on the 16th, the national football team has to face Syria again. "enemy".   The reason why he is called an "enemy" is that Syria has not left any good memories of Chinese football in the hands of these years. On November 14, 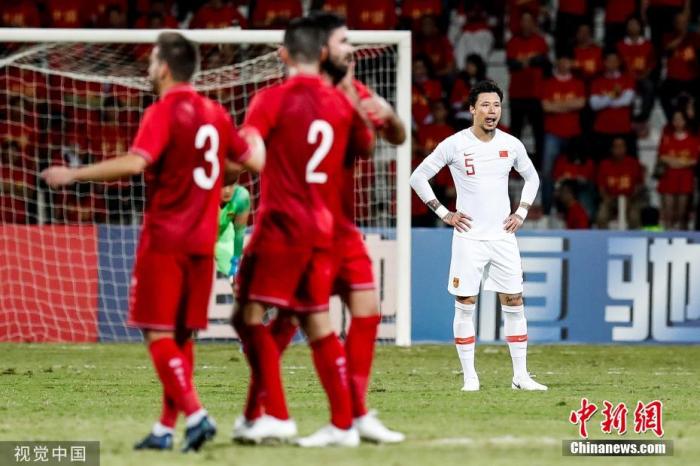 Chinanews client, Beijing, June 15th (Bian Liqun) After more than a year and a half, in the final round of the World Preliminary 40, which started at 2:00 am Beijing time on the 16th, the national football team has to face Syria again. "enemy".

The reason why he is called an "enemy" is that Syria has not left any good memories of Chinese football in the hands of these years.

After the game, the coach Lippi announced his resignation.

The picture shows Zhang Linpeng in the game.

In the last world preliminaries, the Syrian national football team encountered the top 12 matches. The situation was very good, and the opponent was evened at the last moment, leaving only theoretical possibilities for the impact of the Russian World Cup.

In the first half of this World Preliminary Top 40, the battle with Syria was about competing for the first qualifying right of the group. As a result, the national football team accidentally lost the game with an own goal at the last moment and advanced to the top 12. The situation of the game was immediately precarious.

To make matters worse, in the press conference after the game, the then coach Lippi suddenly announced his resignation. The taste of "one place chicken feather", even if the national football team has won three consecutive victories and the qualifying situation is relatively optimistic, it is still Somewhat unforgettable.

After the game, the then national football coach Lippi announced his resignation at the press conference.

Even if it is the current situation, the national football team can basically qualify after a tie, and even if they lose, they may qualify, but don't leave yourself any "backward" and don't have any illusions.

After all, in addition to the "curse" faced by Syria in recent years, "getting out if you draw a tie" also seems to have become a major "curse" of the national football team. These "curses" need to be completely broken.

On June 11, local time, in Sharjah, UAE, in the second round of the 2022 Qatar World Cup qualifier Asian Top 40 Group A, the Chinese team defeated the Maldives 5-0 and won the world preliminaries 3 consecutive victories.

The battle against Syria is also a major milestone for the national football team.

On the one hand, this is the final battle of the National Football Team in the top 40 of this world preliminaries, and it is about whether it can advance to the top 12.

On the other hand, this is also the strongest opponent Li Tie has ushered in after taking charge of the national football team. To a certain extent, this is a touchstone to test the strength of the team. In the case of a relatively optimistic promotion situation, it is similar to that of the national football team. Test the water in the top 12 stage.

In the more brutal top 12 stage, the national football team will never meet opponents of the Philippines and Maldives, no matter how lucky they are divided into the group, the "standard" is a team like Syria.

Data Map: The National Football Team is preparing for the second half of the top 40 match.

Compared with the first round against Syria, the national football lineup that has entered the "Iron Army" era still has a lot of changes.

Especially for the back line, only Zhang Linpeng currently has more chances to play, and only Wu Xi, Wu Lei and Exon can still serve as the starters in the midfield.

In terms of strength, with the reinforcements of Alan and Jiang Guangtai, the national football team's lineup has also been enriched compared to the first round.

Jiang Guangtai is a key player in the defense of the national football team.

In the previous battle with Guam and the key battle with the Philippines, Li Tie used the same starting lineup.

Against the Maldives, Li Tie sent a rotation lineup, which is obviously to accumulate his strength against Syria.

Because the interval between the two matches of the national football is only 4 days, Syria, which is waiting for work, has as many as 9 days to adjust.

At the pre-match press conference of this game, Li Tie once again attended the match with Wu Xi. This may also be a signal. In the case that the previous game played relatively smoothly, it is not ruled out that Li Tie will continue to use the same starting lineup as Guam and the Philippines. .

It should be noted that although the opponent Syria has locked the team's first and qualifying rights in advance, it does not mean that the opponent will "kick" against the national football team. Syrian coach Marur has mentioned in interviews on multiple occasions, Go all out in the game to defeat the Chinese team.

Of course, in this kind of destiny-determining game, you will not pin your hopes on others. After all, you have to rely on yourself to win.

The national football coach Li Tie in the game.

In response to Syrian coach Marur’s remarks, Li Tie said in an interview at a pre-match press conference: “For the national team, every game is important. No game is a small game, it is a final. But. There is no need to think about more other things. It is enough to show your own level, enjoy the game, and show your best side."

When it comes to the experience of playing against the Syrian team in the past, Li Tie took a lighter view and said that there is no need to consider these.

The captain Wu Xi said that the players are looking forward to this game, Syria is an old opponent, but the past is over, hope to play the next game well.

I hope that the national football team that is going abroad can advance to the top 12 with a victory in the early morning of the 16th Beijing time. Good luck to the Chinese team!