Slovakia took the lead against Poland 1-0 in St Petersburg. Róbert Mak did a fine preparation but did not get credit for the goal which was counted as an own goal by the Polish goalkeeper Wojciech Szczesny. - It is a crazy rule, says the former Fifa judge Jonas Eriksson. 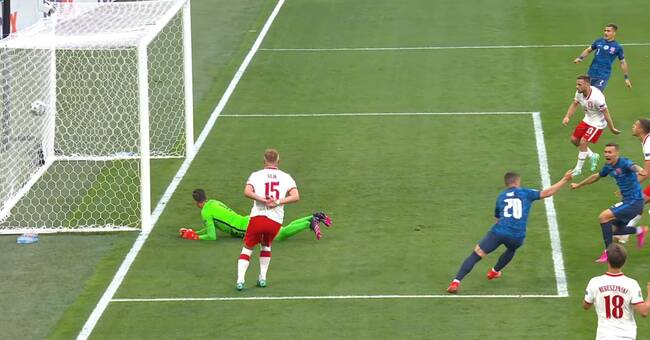 Róbert Mak appeared on cue near the post, and steered it past the goalie. The ball looked to have taken a deflection on the way in, but he's claiming it!

It was counted as an own goal.

That rule was sawn in SVT's EM studio.

- Since the ball is not on its way into the goal, it becomes an own goal.

It feels horrible, it's a crazy rule.

If I were a referee, I would have liked to put a real goal scorer there.

That this should be an end in itself is a joke, says referee expert Jonas Eriksson.

- It means a lot that he does not get the goal even though he did it, says host André Pops.

"Stiff and does not promote positive football"

- Yes, absolutely, but what to do?

Rules must be followed, says guest expert Ola Toivonen, long-term injured and rehab with Malmö FF for the rest of the season.

- It is rigid and absolutely not conducive to positive football, we want goal scorers and when you have acted in this way, you should get it in the minutes, Jonas Eriksson adds.

- Then you would not have to have scapegoats and hang them out that way. Rather give the goal to a hero. Now it will be Szczesny who gets this bad stamp, says the expert Daniel Nannskog.