The Austrian star apologizes for the goal celebration

Marko Arnautovic today apologizes for his aggressive goal celebration after he made it 3-1 for Austria in the final minutes against Northern Macedonia in the European Championship finals in Bucharest. "I'm not a racist," he wrote on Instagram. 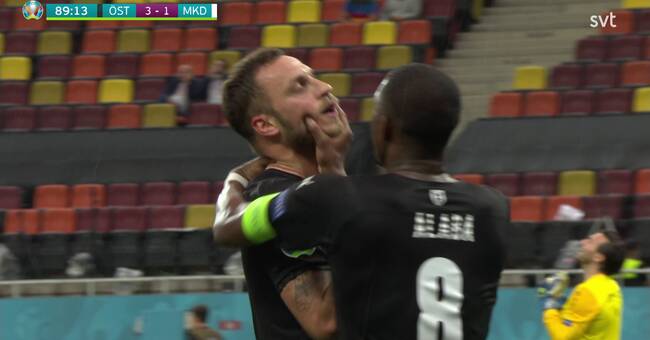 Immediately after the goal, he turned around (was replaced in the 59th minute) and shouted aggressively at the North Macedonian players, something he continued with when his teammates clung to him to celebrate the goal and the victory.

The farthest went was the big star David Alaba (who this summer went from Bayern Munich to Real Madrid) who pressed Arnautovic's mouth to keep him quiet.

"There were some hot words yesterday when emotions took over that I would like to apologize for - especially to my friends from northern Macedonia and Albania," writes Arnautovic, who has a Serbian father, on Instagram.

He claims that the exchange of words was directed at the North Macedonian fans, but in the media reporting it appears that two players with Albanian roots, Egzon Bejtulai and Gjanni Alioski, may have been the subject of anger.

"I would like to say one thing very clearly: I am not a racist.

I have friends in almost every country and I stand for diversity.

Everyone who knows me is aware of that ", writes Arnautovic who today plays in the Chinese league.

Prior to that, the 32-year-old played for clubs such as Inter, Werder Bremen, Stoke and West Ham.

Serbia does not recognize Kosovo and there is a historic tension with northern Macedonia.