Austria has taken the nation's first European Championship victory. In the premiere against Northern Macedonia, the victory was 3-1. Behind the victory were the jumpers Michael Gregoritsch and Marko Arnautovic. 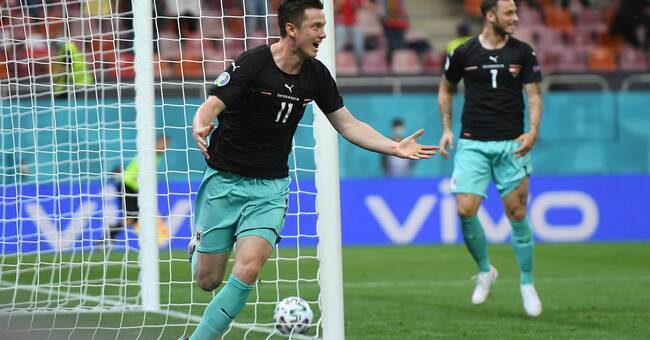 The important 2-1 goal came in the 78th minute after preparation by David Alaba.

The Austrian star sent in a prefect pass from the left wing.

The ball steamed down in front of the feet of substitute Michael Gregoritsch who despite surveillance pushed in 2-1 from close range.

In the absolute final stages of the match, the nail then came into the coffin.

Marko Arnautovic, also a substitute, rounded the North Macedonian goalkeeper before sending in the final result 3-1.

It was also Austria who, in an intense first half, opened the scoring in the 18th minute.

The management goal was a demonstration of both precision and conclusion.

Lainer jumped up with both feet and put with the wide side 1-0 on the volley.

Both teams played offensive football and ten minutes after the 1-0 goal, Northern Macedonia received a dividend.

An Austrian player was careless in a clearance and pulled the ball on his own player.

The nation's first goal scorer in a championship

The ball bounced back towards his own goal and after a collision with an opposing player, goalkeeper Daniel Bachmann dropped the ball.

Goran Pandev caught up and scored 1-1 in the open goal.

37-year-old Pandev, who pushed Northern Macedonia to the European Championships, also became the nation's first goal scorer in a championship.

A bit into the second half, Pandev also got the chance to become a two-goal shooter.

Enis Bardhi delivered a superb pass behind the back line to Pandev.

The latter tried to lift the ball over Bachmann but the Austrian goalkeeper saved.

Despite the fact that Northern Macedonia really moved up at the end of the second half, Austria stood on the podium and won after the goal in the 90th minute with 3-1.

Thus, Austria has taken the nation's first victory in a European Championship play-off.