Marvik is studying Vietnam..and is preparing to face the decisiveness with a special strategy

The first national team concludes, this evening, its preparations for the last match in Group G, in the double qualifiers for the 2022 World Cup and the 2023 Asian Cup finals, in which it will face Vietnam at 8:45 pm tomorrow at Zabeel Stadium in Al Wasl Club. 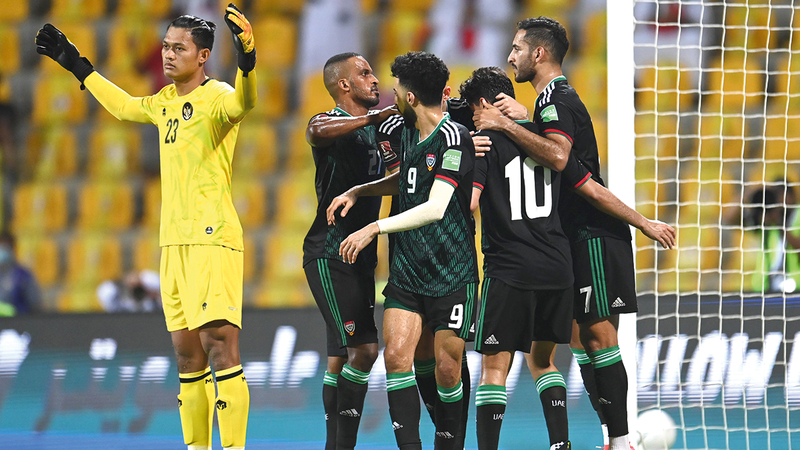 Recovery sessions to remove fatigue and stress of matches

Marvik is studying Vietnam..and is preparing to face the decisiveness with a special strategy

«Al-Abyad» is looking forward to winning over Vietnam and continuing its victory.

The first national team concludes, this evening, its preparations for the last match in Group G, in the double qualifiers for the 2022 World Cup and the 2023 Asian Cup finals, in which it will face Vietnam at 8:45 pm tomorrow at Zabeel Stadium in Al Wasl Club.

The device had opened the file of confronting Vietnam after the match against Indonesia, in which “Al-Abyad” won by a clean five directly, and subjected all the players to recovery sessions with the aim of removing the fatigue caused by the pressure of the matches, and rehabilitating the “Al-White” stars to be ready for the important match against Vietnam, which requires a double effort. As the decisive confrontation in the career of the team.

"Al-Abyad" practiced yesterday evening at Zabeel Stadium, during which the technical staff stood on the readiness of the players and developed the appropriate strategy for the match, whose three points our team is targeting, and Marvik and his assistant staff give the confrontation the necessary attention, as he began a while ago to study the opponent, and analyze his performance from during previous match recordings.

The match is of great importance to both parties, as its result will be decisive in determining the first place in the group, who will qualify directly for the next stage of the qualifiers, as the competition between the two teams was limited to the first and second places, after the rest of the teams lost hope, as Thailand and Malaysia are equal. In the balance of nine points, while Indonesia has one point.

"Al-Abyad" enters the match raising the slogan of victory in order to be able to grab the top of the group and ensure qualification directly, as the Vietnamese team has 17 points, which put it at the top of the group, two points ahead of "Al-White". Our team needs to win to raise its score to 18 points and surpass Vietnam.

Ali Salmeen: The match against Vietnam is crucial... and they are able to accomplish the mission

The national team midfielder, Ali Salmeen, described the Vietnam match as crucial, as it qualifies the team directly to the next stage of the 2022 World Cup qualifiers if he wins, and ensures his presence in the 2023 Asian Cup finals, stressing their ability to complete the task by occupying first place in the group, and kidnapping a card Direct qualification to the playoffs.

Salmeen expressed his full respect for the Vietnam national team, which has presented outstanding levels and succeeded in staying at the top of the group so far, noting that "Al-Abyad" aims to take the lead from its opponent, who is two points ahead of it, which puts our team in front of the only option, which is to win, to ensure qualification. Directly without entering into the preference calculations with the teams that occupy second place.

He said: “We realize that the task will not be easy, and we know that the road to the top of the group will not be paved with roses. We are facing a strong and experienced competitor, whose recent results confirm that he will live his best days, but despite all that we have great confidence in our abilities, and we are ready to achieve what is required, just waiting.” Support our fans, who we trust will not fail with us, and we, for our part, will fight with all our might to give them the qualification ticket and a well-deserved joy at the end of the match.”

Abdullah Ramadan: Winning is our only option

The national team player, Abdullah Ramadan, stressed the importance of fighting for victory over Vietnam in tomorrow's match, considering that victory is the only way that can lead "Al-Abyad" to the top of the group, and thus extract the direct qualification card to the next stage of the qualifiers.

Ramadan stressed that all players are aware of the great responsibility placed on them, and they know that the fans pin high hopes on them, and are waiting for great joy in the team’s qualification, expressing his hope that they will be successful and succeed in achieving victory and crossing to the decisive stage of the qualifiers, praising all the elements of the team, again. Confidence in the ability of his colleagues to do the task despite the strength of the opponent.

He said, "The Vietnamese team showed an advanced level during the qualifiers, and succeeded in collecting 17 points, which put it on the lead, two points ahead of (white), the card is still on the field, and we still have the opportunity to confirm our worth and prove our superiority by beating the stubborn competitor, snatching the lead and obtaining the qualification card."

• The national team concludes its preparations this evening, in preparation for facing Vietnam.

• The technical staff analyzed the competitor's performance, through previous matches.