Rashid bin Humaid: The team's performance against Indonesia raises the head of every Emirati

Sheikh Rashid bin Humaid Al Nuaimi, President of the Football Association, presented an Emirati fan of determination with a photography camera, in appreciation of his presence specially from Al Ain in a wheelchair to support Al-Abyad in its match against Indonesia, which took place the day before yesterday, for the account of the seventh group of the double qualifiers. 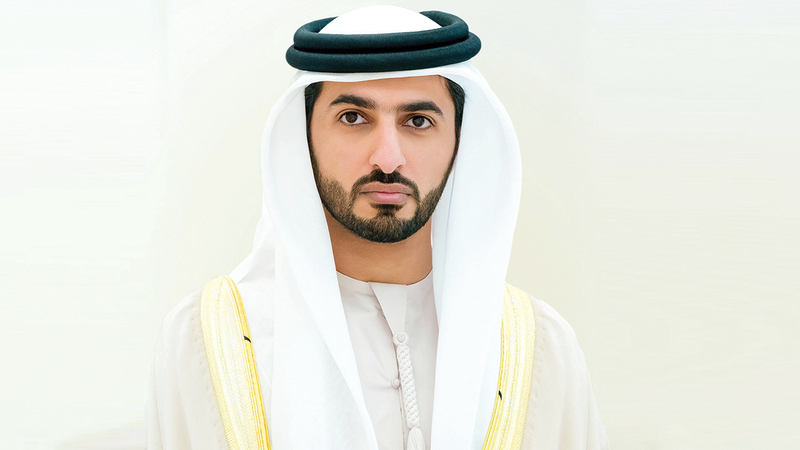 Gift a fan of determination a photography camera

Rashid bin Humaid: The team's performance against Indonesia raises the head of every Emirati

Sheikh Rashid bin Humaid Al Nuaimi, President of the Football Association, presented an Emirati fan of determination with a photography camera, in appreciation of his presence specially from Al Ain in a wheelchair to support Al-Abyad in its match against Indonesia, which took place the day before yesterday, for the account of Group G of the double qualifiers for the 2022 World Cup, And the 2023 Asian Cup, the result of which ended with the victory of the team by five clean points.

Sheikh Rashid bin Humaid Al Nuaimi met the fan at Al Wasl Club, which hosted the match, and praised his presence in Dubai to support the players and the UAE national team, considering that such models of fans give the players a permanent incentive to achieve victories.

The President of the Football Association invited the fans of people of determination to attend the national team training, and to take memorial photos with the players and members of the technical staff.

As soon as Sheikh Rashid bin Humaid Al Nuaimi learned that the fan loves photography, he ordered that the fan be given a modern camera for the Media Center of the Football Association to support him in continuing the hobby he loves.

Sheikh Rashid bin Humaid had once again invited the fans and all football fans and affiliates to continue supporting Al-Abyad in its upcoming match against Vietnam next Tuesday in the final match of the Group G matches, which will be determined in light of the results of the national team’s position on ascending to the second round of playoffs.

Sheikh Rashid bin Humaid said in a press statement after the Indonesia match: "We congratulate the people of the UAE and its officials on the great victory that the national team achieved over Indonesia, and on the good results it achieved in the World Cup qualifiers."

He added, "Al-Abyad played a perfect match against Indonesia, which came as a continuation of the successful journey he presented in previous matches. This performance raises the head of every Emirati and makes him proud that this is his country's team. The team plays at an outstanding level, proving that there is a promising future for the team in the upcoming matches."

He pointed out, "I am very optimistic about the future of this team in its qualifying journey, as every player performed his duty with sincerity and high professionalism, and this method undoubtedly reflected on the positive results that Al-Abyad is going to achieve, and we ask all players to continue in this way."

He continued: "The team has become giving confidence to everyone who follows its matches that there is high harmony and high-end technical skills that have changed the image of Al-Abyad for the better, and that image that the team appeared on behind is a team of technical staff and players, as it is an integrated partnership that we all work on to represent the UAE in international forums. At its best.”

He continued, "The next match against Vietnam is very important and we should not underestimate any opponent. The victory in the Indonesia match gives an impetus to what is to come. The important thing is that we play every match as a final. We think only of winning, and we are confident that everyone will stand with the national team in this meeting." Our fate is because they are on a national mission, so it is imperative that we all stand behind the team, in order to achieve the result that makes us all happy.”

Al-Abyad raised its score to 15 points in second place, while Vietnam maintained its lead in the standings after raising its score to 17 points by defeating Malaysia with two goals to one.

The match against Vietnam in the tenth round, the day after tomorrow (Tuesday), will determine the identity of the team that will lead Group G and qualify directly for the third stage of the 2022 World Cup qualifiers.

• Inviting the fans of people of determination to attend the team's training, and to take memorial photos with the players.

Al-Ahbabi: The joy of the players will not be complete until after the victory over Vietnam

The national team player, Bandar Al-Ahbabi, confirmed that all the matches that Al-Abyad played in the second stage of the World Cup qualifiers were difficult, and there was no easy match as some imagine.

He said in a press statement: “The meaning of our victory in the past three matches does not mean that it was easy, but on the contrary, every team we faced was looking for its chances of qualifying, and this is a legitimate right for everyone, but the Vietnam match will remain the most important, because we will face the leader and the result of that confrontation will be decisive in Our path is towards qualifying for the second stage of the qualifiers, and this is what requires us to be at the top of our technical and physical readiness.”

He added: “So far, we have not had anything in our hands, and our joy, whether with performance or results, will not be complete until after the victory over Vietnam the day after tomorrow, because it is the most important thing for us to qualify and be happy with what we have presented in the qualifying journey, and I am confident that the white players will not spare any Effort to win.”

Khalfan: The players feel the responsibility

The team's midfielder, Khalfan Mubarak, defended the level he presents with "Al-Abyad" in his qualifying campaign, stressing that no player does not enter the field without the desire to provide his best levels.

He said, "All players feel the size of the responsibility placed on their shoulders to delight the fans who crawl to the stands to support the team, and this is what motivates everyone to give their best to win every match."

He added, "This support we receive from our fans has given us confidence in every match, and we assure everyone that we can beat Vietnam, as we did in the past three matches."