Lukaku leads a flawless Belgium and pays tribute to Eriksen: "Chris, I love you"

Soccer is not to be an example of anything. It is simply a mirror that returns the image of our society. Neither grooming nor deforming it. It shows it as it is. In this... 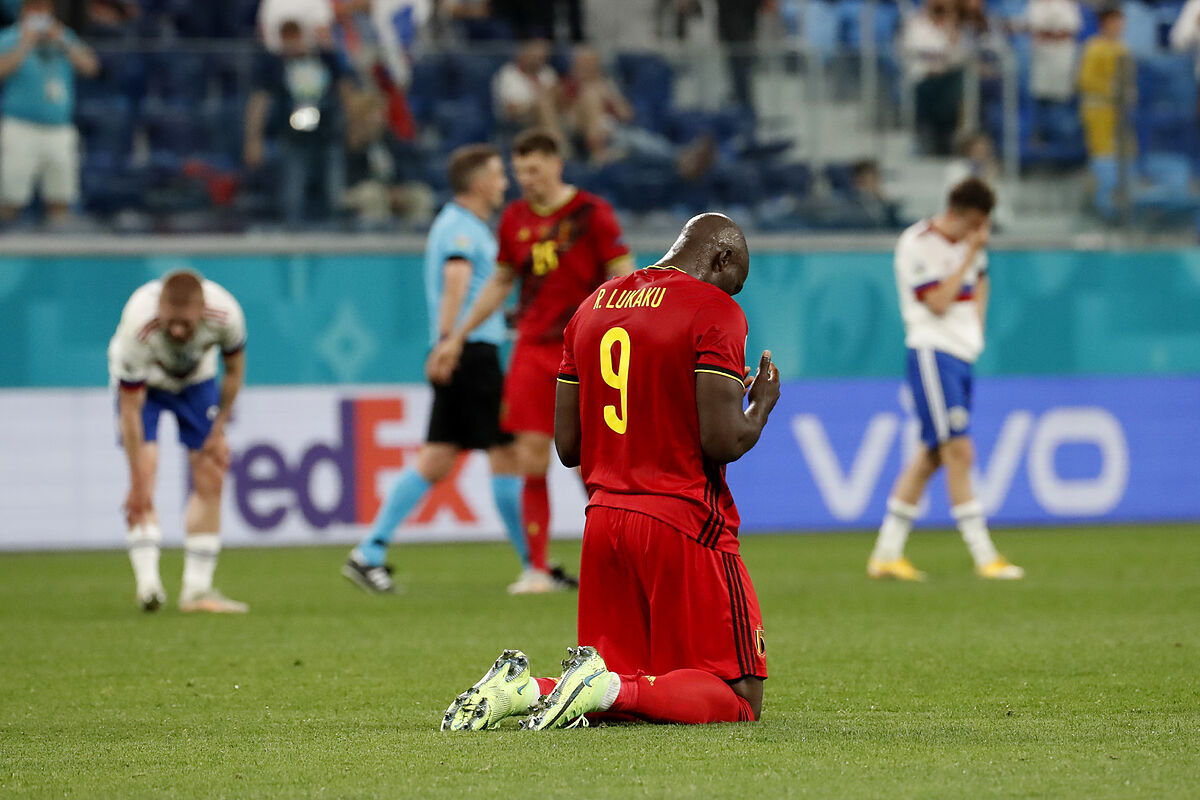 Soccer is not to be an example of anything. It is simply a mirror that returns the image of our society. Neither grooming nor deforming it. It shows it as it is. On this first Saturday of the Eurocup, the visual, dialectical and executor voracity of the entertainment industry -which is so gladly consumed- again prevailed over ethics and humanity. The matches were completed normally after

in Copenhagen. In St. Petersburg, minutes after the national anthems were honored, with some of the players still in

Because of what happened hours before, the Russian footballers were left looking impassively as the Belgians knelt.

Some countries repudiate this staging against racism.

But, we said, football gives back the image of society.

That's why no one will forget

after scoring his first goal of the tournament and yelling, "Chris, I love you."

That was not just a tribute from Lukaku to Eriksen, his teammate at Inter.

It was the evidence that the insensitivity of the business much less can with everything.

Neither with the purity of the sport, also capable of causing respect and admiration. And the Belgian team that

has turned into one of the best on the planet

. Against Russia, in his debut in a European Championship in which he starts as one of the great favorites for the title, he showed that his good fortune does not depend on the appearances of his stars -

were out of the game due to injury, while Eden Hazard played 20 minutes. His football is choral and sparkling, bureaucratic when he plays, but aggressive in the definitive areas of the field. And there Lukaku is gold.

The formidable Belgian striker, who comes from dragging Inter to the

, hit the net without blinking the first chance he had.

Although for this he had to wait for the referee team, led by the Spanish

, to interpret that the grotesque clearance of the central

It remains to be seen to what extent the Russian defender, knowing that he had Lukaku behind him, was conditioned before touching the ball.

VAR issues insist on misleading anyone.

Being so early behind on the scoreboard brought

to confusion. And to squirm in the memory that Belgium had already taken her twice ahead in the Eurocup qualifying round, including a 1-4 on the same Krestovski island of Saint Petersburg in November 2019. Cherchesov was useless. experiment with a defense of four, when his best results were always achieved with three centrals. His rear was a flan. And nothing good was happening a few meters away either. The only Russian plan was to hit its captain, the

, who could offer nothing more than to lift balls from the sky.

So after a serious warning from

, reliable partner of the neat

in the Belgian engine room, it was

who showed the way to the second goal. Goalkeeper

rejected as best he could, unable to prevent Meunier from

2-0. The winger had taken the field half an hour after a tremendous blow between

out. Cherishev, recruited, could not emulate that triumphant debut of the 2018 World Cup. His coach, in fact, sent him back to the bench in the second half.

due to injury - Roberto Martínez ran into

that led to the exotic entry of

-, tried to replace his team by returning to the line of four.

came into play a little more.

But Belgium, even if

wanted something more going on, with

as a simple spectator, he already knew what he had to do: dominate the space.

And also a time that he insists on making his own.

The list of Luis Enrique for the European Championship: Sergio Ramos is not summoned with Spain