Injury does not stop Gifting in the World Cup premiere

Star shot Isak Gifting, 20, comes to this weekend's World Cup premiere in Russia with a painful left foot. - I pinched my foot during training in Germany on Tuesday. Tough of course, but I drive on syringes, Gifting tells SVT Sport. 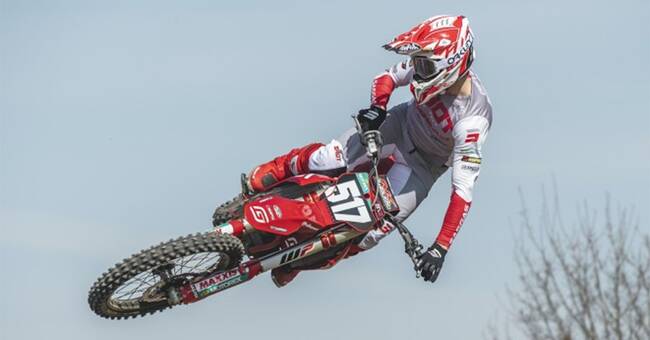 An injury just days before the premiere in his first season as a factory driver in the MX2 class is of course a heavy blow for Isak Gifting.

But today he travels with the team to Russia for the start of the "little World Cup", as it is also called.

The drivers must be a maximum of 23 years old and the aim is high despite the difficult start.

- World champion is the goal!

Only in this class do I have three years to succeed, points out Gifting, who is the greatest talent that Swedish motocross has produced in many years.

Factory contract and move to Germany

Last season, Gifting got the chance to make a breakthrough for Spanish GAS-GAS factory stables when one of the team's drivers was injured.

Gifting took the chance and lined up top 10 results and also two podium places before the season was over.

The reward was a factory contract and moved to Germany where the team is based.

The World Cup season should have already been in full swing but is greatly delayed due to the pandemic.

While waiting for the premiere, Gifting has sharpened its form in the open Swedish Championships at Saxtorp and in Uddevalla.

He dominated the premiere and won one of the days in Uddevalla with several top drivers from the WC on site.

- They may not have such a good view of me yet.

I like to be an "underdog" and that suits me perfectly, says Gifting.

As a satellite team to the dominant KTM, Gifting gets to train with, among others, the reigning world champion in the class, the Frenchman Tom Vialle.

- Isak has absolute opportunities to become a top driver in the WC, Smets believes.

On Sunday you will meet Isak Gifting in Sportspegeln 19.00.