Five years of waiting, it's about to happen! Please keep this guide to the European Cup

Chinanews client, Beijing, June 11 (Reporter Yue Chuan) After five years of waiting, there are thousands of calls. In the early morning of the 12th, Beijing time, the 2020 European Cup, which was postponed for one year due to the epidemic, will kick off. Screenshot from UEFA's official website The summer of football is finally back!   Watching the European Cup, giants and stars are inevitable 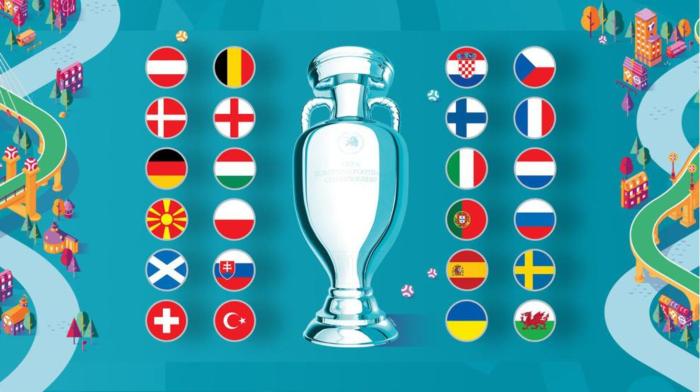 In the early morning of the 12th, Beijing time, the 2020 European Cup, which was postponed for one year due to the epidemic, will kick off.

The summer of football is finally back!

Watching the European Cup, giants and stars are inevitable topics, they are the focus of the spotlight.

In the 60-year history of the European Cup, 10 teams have won the championship.

Among them, the German team and the Spanish team have won the most championships, each winning three times.

In addition to these two teams, Italy, France, the Netherlands, Denmark, and Portugal will also participate in the current European Cup as the champions of previous events, of which Portugal is the defending champion.

The above-mentioned teams basically include the favorites of this European Cup.

Five years ago, based on a solid defense, Cristiano Ronaldo led the Portuguese national team to win the first heavyweight championship in team history. The picture of moths kissing his tears became a classic.

Five years later, Cristiano Ronaldo, who has just won the Serie A Golden Boot, is still sharp. The younger generation of players such as Bruno Fernandez and Diogo Jota have already provoked the backbone, and they have the strength to complete the defense.

In the European Cup without Messi, Ronaldo is the focus of attention.

For him, this tournament has a special meaning.

In the historical scorer list of the European Cup finals, Cristiano Ronaldo is currently tied with French legend Platini for first place with 9 goals.

As long as he wins in this tournament, he will monopolize the top spot in history.

Ronaldo also said that his desire and motivation for this European Cup is the same as when he first participated in 2004.

The French team, which was frustrated in the last European Cup final, will now play as the world champion.

With a luxurious and neat lineup, coupled with the return of Benzema, the French team, which is regarded as a hot champion, can't keep a low profile.

Coincidentally, the defending champion and the biggest favorite were put into the same group this time; even more coincidentally, the German team with the best record in European Cup history also came to join in the fun.

Although the German team did not perform well in the World Cup, the wealth of the team is still there.

The return of Muller, Hummels and other veterans will play a role in stabilizing the military's morale.

What's more, no one dared to underestimate the German team in the competition.

In this way, Group F has become a veritable "death group".

Although after the European Cup has expanded to 24 teams, each group may also qualify for third place, but from the perspective of winning the championship, everyone must strive for the best group ranking.

Similar to the German team, Italy and Spain are currently not outstanding on paper.

But these veteran giants know the truth about the victory of the soldiers.

Among the teams that have no experience in winning the European Cup, the Belgian team is currently the strongest.

They broke into the semi-finals of the World Cup and dominated the group in the latest FIFA national team rankings.

With Hazard, De Bruyne, Lukaku and others gradually standing up year after year, this may be the "golden generation" of Belgium, the last time they hit the European championship together, they will definitely cherish this opportunity.

Corresponding to the favorites to win, there must be a dark horse in every competition.

However, unlike the World Cup, there are no underdogs in the European Cup, and teams that are not considered favorites to win can all become dark horses.

Outside of the game, this is a very special European Cup.

When looking back at football events such as previous World Cups and European Cups, fans are accustomed to distinguishing them by year and host name, such as the 2002 Korea-Japan World Cup and the 2016 European Cup in France.

However, in the upcoming European Cup, the situation is different.

Except for the most common single host, in the history of the European Cup, there have been situations where two countries co-hosted it several times.

However, this is the first time that as many as 10 countries have participated in the competition.

The current European Cup was originally planned to be co-hosted by 13 European cities, but in view of the epidemic, after the host site was increased and reduced and the schedule was re-arranged, it was finally hosted by 11 cities from 10 countries, involving a total of 11 stadiums.

Among them, there is no shortage of familiar "stars".

For example, the Wembley Stadium, which has a history of nearly a hundred years, is one of the landmarks in London; the Allianz Arena in Munich, which is the home stadium of the Bundesliga giants Bayern Munich; and the Olympic Stadium in Rome, which witnessed the first place in Italy in 1990. Xia's final battle...

There are two cities in the UK participating in the competition, of which Wembley Stadium will host a total of 8 games including two semi-finals and finals, which is the most in each stadium.

Then there is the St. Petersburg Stadium, where 7 games will be played.

Italy's opening match against Turkey will be held at the Olympic Stadium in Rome.

Puskas Stadium is the "youngest" of these 11 stadiums. It was completed in 2019. Correspondingly, the Hampton Park Stadium has the longest history. It was built in 1903.

The stage is set up, but the most important thing is whether the event itself is exciting.

Here are the 10 games not to be missed in the group stage for fans' reference (all Beijing time):

Starting tomorrow, there will be 51 duels in one month.

It is hoped that fans have been waiting for the European Cup for four years and years, and football can once again engrave time and become a node of memory.