"Despite the efforts of doctors": 19-year-old motorcyclist Dupasquier dies after a terrible accident at the Moto3 stage

In Italy, 19-year-old motorcycle racer PrustelGP Jason Dupasquier has died. The Swiss athlete suffered fatal injuries as a result of an accident that occurred during the qualification of the Moto3 stage at the Mugello circuit. After Dupasquier fell on the asphalt, one of his rivals ran into him. The young pilot was promptly taken to a hospital in Florence, but the doctors failed to save him. 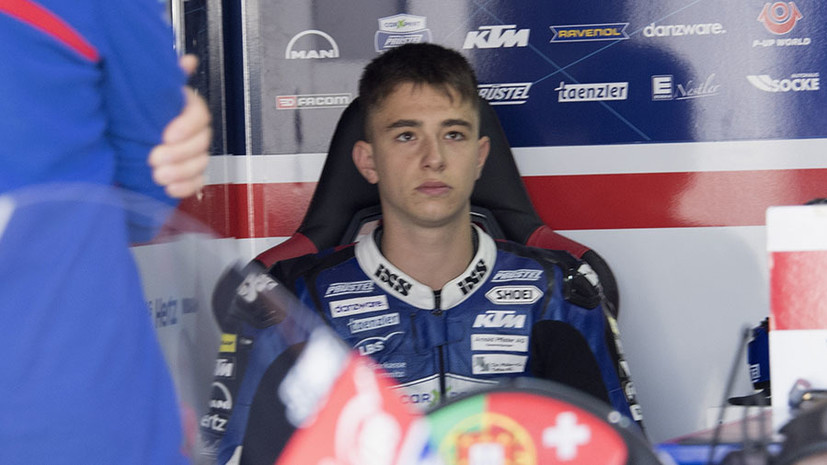 The Moto3 World Championship in Italy was overshadowed by a serious tragedy.

On Sunday, 19-year-old driver Jason Dupasquier of the PrustelGP team died from injuries sustained during qualifying.

“The hospital announced that despite the best efforts of the district medical staff and all those who subsequently assisted the Swiss rider, Dupasquier unfortunately passed away,” according to the official MotoGP website.

A terrible accident involving a young athlete occurred between the ninth and tenth turns of the Mugello, after which this session was marked with a red flag.

The Swiss was preparing to finish in a group with four rivals, but did not keep his balance.

The young man flew out of his motorcycle at high speed.

But the worst thing is that Ayumu Sasaki, driving right after Dupasquier, did not have time to go aside and hit a colleague.

The Japanese also ended up on the asphalt and remained motionless outside the track, but miraculously escaped serious damage.

But Jason received, as it turned out later, injuries incompatible with life.

MotoGP tried to do everything to save the rider.

Later, the motorcyclist was taken by a special helicopter to the Careggi hospital in Florence.

His condition at that time was assessed as stable.

“The rider had a very serious accident during the second qualification of Moto3.

The ambulance vehicles arrived at the scene immediately.

Following this, he was taken in stable hemodynamic condition to Florence in the Careggi hospital.

We will be waiting for news from there, ”the official MotoGP website quotes Giancarlo Di Filippo, FIM doctor.

Unfortunately, the 19-year-old athlete did not manage to save his life.

He passed away on Sunday morning.

French racer Fabio Cuartararo of Monster Energy Yamaha MotoGP, who ultimately won the victory, barely holding back tears, dedicated it to Dupasquier and his family.

A race victory for Quartararo, but some things are more important than racing # ItalianGP 🇮🇹 pic.twitter.com/8txc4139SD

Condolences to the family and friends of the deceased were expressed not only in MotoGP, but also in Formula 1.

“There are no words that can describe the pain of such a loss.

Our thoughts are with Jason's family, his friends, and the entire MotoGP community, ”reads a post on the Royal Races social media.

Also, the memory of the Swiss was honored by the Formula 1 pilots Carlos Sainz Jr. and Antonio Giovinazzi.

This season in Moto3 was only the second in his career for Dupasquier.

The debut drawing went to him for adaptation.

Jason showed rather modest results, did not rise above 17th place and did not score a single point in the overall standings.

But in the current Swiss has made serious progress.

The young pilot has shown that he no longer intends to be content with just going to the start.

At the very first stage in Qatar, the motorcyclist entered the top ten for the first time and scored points.

On the second, he became 11th.

In Portugal, the 19-year-old took 12th place, and in Spain he achieved the highest result in his career, showing the seventh time.

It seemed that he had a great career ahead, rich in victories.

However, the stage in France, where Dupasquier finished 13th, was the last in his career for him.

In Italy, the fans did not wait for James to start.

We can safely say about the young athlete: he was sentenced to motorcycle racing.

The fact is that his father, Phillip Dupasquier, was also involved in motocross.

The boy followed in his footsteps.

It quickly became clear that the child had great talent.

The Swiss began his career in Supermoto, where he repeatedly became the champion of the country.

Then he moved to circuit racing and in 2016 won the ADAC NEC Championship Moto3 class.

The very next year, Dupasquier Jr. performed at the World Junior Championships.

It was planned that in 2018 Jason will make his debut at the Red Bull Rookies Cup, but he suffered a serious leg fracture in the second round of the junior world championship.

The racer was forced to miss the whole year, but in 2019 he returned and took eighth place in the overall standings of the Red Bull Rookies Cup, after which he moved to Moto3.

Judging by the social networks of Dupasquier, the whole life of the young man was devoted exclusively to motorcycle racing.

Even his Instagram nickname contains his favorite number, under which he performed - "jasondupasquier50".

In his account, Jason regularly posted photos from the races and bragged about the latest achievements.

“We have done a great job this racing week, and it will be even better in the future,” rejoiced the driver of the seventh place in Le Mans.

“So happy about today's race.

The first points, ”wrote Dupasquier after the start of the new season in Moto3.

In the photo, a 19-year-old boy is studying the Mugello track and preparing for the stage that will be the last for him in his life.