Tuchel's decisions, De Bruyne's injury and Kante's magic: how Chelsea beat City for the third time in a row to win the Champions League

Thomas Tuchel tactically outsmarted Josep Guardiola. His bet on the game with the second number and quick counterattacks fully paid off, while the opponent had difficulty getting to someone else's penalty area and struck only one shot on target. In addition, in the second half, one of the key performers of the townspeople Kevin De Bruyne was injured. But the leader of Londoners N'Golo Kante did a huge amount of work and was eventually recognized as the best footballer of the confrontation. How Chelsea beat Manchester City for the third time in a row and won the Champions League - in the RT material. 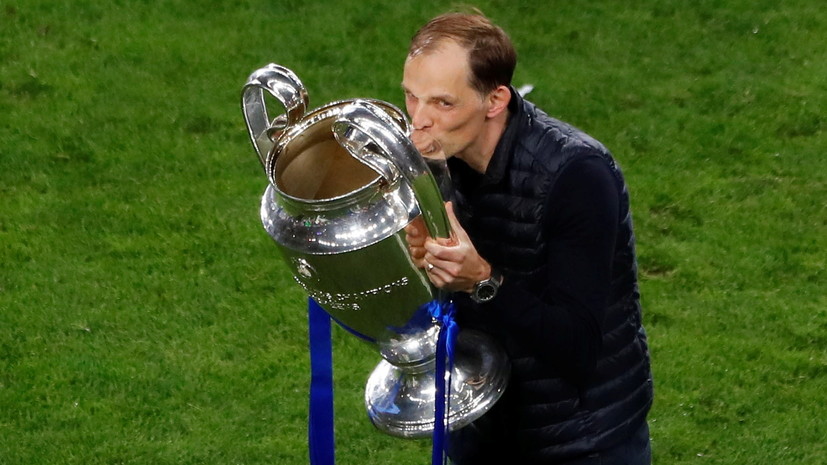 The rivalry between Manchester City and Chelsea in the Champions League final aroused great interest among fans. The fact is that in the last two months the teams have crossed paths for the third time. Moreover, both previous meetings remained with the Londoners, who, after joining the coaching bridge of Thomas Tuchel, experienced a real revival. The German specialist consistently beat Josep Guardiola, first in the FA Cup semi-finals (1: 0), and then in the Premier League (2: 1). Moreover, the specialist was eager to take the main European Cup on the second try. Last year, his PSG lost to Bayern in a decisive confrontation.

In turn, the Catalan in the final match of the season did not become cautious and made a bet on the extremely attacking 4-3-3 scheme, which he used in most of the last meetings.

The striking fist in the center of the field was made by Philip Foden, Bernardo Silva and Ilkay Gundogan in charge of insurance.

At the same time, during possession, the team often lined up in an arrangement of three central defenders, and Alexander Zinchenko climbed higher.

It quickly became apparent that Guardiola's game plan was not working completely. The townspeople, although they had an advantage, were unable to pass the echeloned enemy defense. The opponents were only too happy to give them the ball. In the center of the field, all approaches to the penalty area were blocked, and on the flanks Ben Chilwell and Rhys James operated reliably, practically not allowing themselves to beat Marez and Sterling one on one. In those rare cases, when the opponent still managed to get close to someone else's goal, the Londoners had a clear safety net.

As a result, Manchester had practically no chances in the first half.

I only remember Sterling's appearance at the very beginning of the match, which Edward Mendy coped with with some difficulty.

Looking ahead, this shot was the only one on target for the entire match for the champion of England.

Of course, with such statistics, it was difficult to count on winning the Champions League final.

But all of Tuchel's ideas worked almost perfectly.

As in the meetings with Atlético and Real Madrid, the team relied on high pressure, tackling and fast, swift counterattacks.

It bore fruit over and over again.

Werner alone forgave his opponent a couple of times.

At first, he miraculously missed the ball from a lethal position after a lumbago from the left flank, and then from within the penalty area shot straight into the hands of Ederson.

Of course, N'Golo Kante played the most important role in the destruction in the Chelsea squad. It is no coincidence that UEFA recognized him as the best footballer of the match. In terms of numbers, the Frenchman made three selections, two clearances and the same number of interceptions. At the same time, he performed 34 assists with an accuracy of 85.3% - the highest figure for a defensive player. And Kante was not looking for easy ways, but sought to sharpen the game. For example, I recall his selection in his own half of the field shortly before the first and only goal, the subsequent 40-meter raid and transfer to the penalty area to Havertz.

At the end of the first half, there seemed to be an unpleasant event for the Londoners - Silva was injured.

His place on the field was taken by Andreas Christensen.

However, this did not affect the team in any way.

In this episode, City's defense was crumbling, and Zinchenko did not keep track of Havertz.

Moreover, for the German, this goal was his debut in the Champions League.

There was a feeling that Guardiola simply did not understand how to change the course of the game. It is significant that after the break, he did not make replacements and rebuild the circuit. It was only De Bruyne's injury at the end of the hour of confrontation that made him go for it. On the one hand, the loss of such a performer can be called a disaster for the team. On the other hand, the Chelsea players did everything to ensure that the Belgian practically did not meet with the ball. After the departure of the midfielder, the Mankunians finally switched to a scheme with a forward forward striker - Gabriel Jesus became him. At the same time, the place of Bernardo Silva, who also had a not very successful meeting, was taken by Fernandinho, who was to insure his partners in the support zone.

Tuchel answered instantly. The German removed Werner from the game, who by that time was noticeably tired and practically stopped clinging to the ball and released Christian Pulisic, counting on his freshness in attack. It is symbolic that it was the American who could remove all questions about the outcome of the confrontation, but in the 72nd minute did not get into the far corner.

Castling helped Manchester to finally take control of the ball. As a result, the collective ownership reached 58%. The team also made 538 accurate passes against 330 for the opponent. But most of them are across the field. City still couldn't get into someone else's penalty area. Catastrophic statistics: in the second half, the champion of England did not strike a single shot on target Mendy. The Senegalese, who became the first African to play in the Champions League final since 1985, easily had the ninth clean-up match in the final season of the main European Cup and repeated the tournament record for this indicator.

The entry of Jesus, who rarely won the fight against the powerful Rudiger and Christensen, did not help Guardiola's charges too much.

Only in the end, when Sergio Aguero appeared on the field, the townspeople managed to pull the nerves of Londoners, and in the seventh minute added to the second half, Foden even missed a clear moment, breaking through higher from outside the penalty area.

However, City's return goal would have been extremely unfair, since Tuchel completely outplayed his counterpart tactically and won the Champions League on the second try.

He also managed to continue a successful streak for German specialists.

In 2019, Jurgen Klopp achieved success in the Champions League with Liverpool, and in 2020 Hans-Dieter Flick with Bayern.

And Chelsea again, as in 2012, won the main European Cup after changing the coach during the season.