Al Jazira Football Company announced the extension of the contract of Dutch coach, Marcel Kaiser, to continue as coach of the first football team in the club for two additional seasons, and the new contract extends until June 2023, for the Dutch coach to continue his work with "Pride of Abu Dhabi", who began his second experience with the team since 2 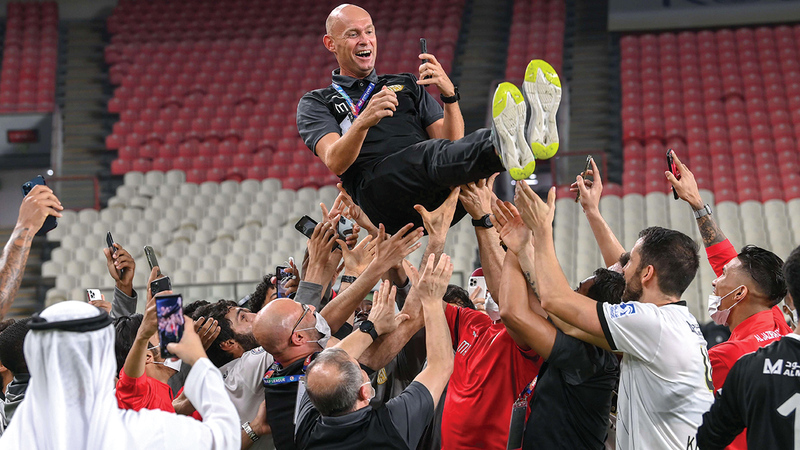 Al Jazira Football Company announced the extension of the contract of Dutch coach, Marcel Kaiser, to continue as coach of the first football team in the club for two additional seasons, and the new contract extends until June 2023, for the Dutch coach to continue his work with "Pride of Abu Dhabi", who started his second experience with the team since 2019, After coaching the team in 2018.

For his part, the Vice President of Al Jazira Club and Chairman of the Executive Committee of the Board of Directors, Dr. Sultan Ahmed Al Jaber, said: “We are pleased to extend the contract of Marcel Kaiser, especially as he is a professional strategic and tactical expert, who was able to embody the club’s philosophy in outstanding offensive play, and he succeeded in implementing the vision of The club’s leadership and management, by developing young national talents and competencies in the club’s academy, nurturing, refining and relying on them, to ensure the continuity and sustainability of outstanding performance.

He added in a press statement: "The achievements of the last season speak for themselves, and are evidence of Kaiser's commitment and hard work in the club, and the renewal of his contract reflects the administration's keenness to provide stability and long-term planning towards achievement and brilliance through the concerted efforts of all members of the Al Jazira Club family on and off the field. And I am confident that (Pride of Abu Dhabi) fans will be happy to see Kaiser coach the team for at least the next two seasons.”

He concluded: "I take this opportunity to highly appreciate the club's leadership's interest and keenness to provide a supportive system for success and excellence, and I thank everyone who contributed to the completion of the contract renewal, and we look forward to more success and brilliance for Al Jazira Club, at the local and continental levels in the coming seasons."

On the other hand, Marcel Kaiser expressed his happiness at extending his contract with the club, and said in a press statement: “Since my first day at this wonderful club, I felt very welcome, and I am proud to consider Abu Dhabi my second home, and I am very proud to renew my contract, especially after the exceptional season that we were crowned. It has champions of the Arab Gulf League.”

Kaiser is considered one of the most prominent coaches in the Arab Gulf League last season, after he led Al Jazira to win 17 matches with the participation of 17 players from the academy graduates, while losing three matches, including once at home, and Al Jazira scored 65 goals, which is the largest number of goals scored by a team in One season in the Arabian Gulf League, since Al Jazeera achieved the title in the 2016-2017 season.

Since joining Al Jazira for a second term, Kaiser has set records, leading the team in 44 matches in local competitions, achieving a win rate of 61%. The Dutch coach relies heavily on emerging talents and graduates of the club's academy, in line with the vision and philosophy of Al Jazira management.

It is noteworthy that Kaiser began his coaching career in 2007 by taking over the leadership of the Dutch club Argonne, and then led a number of teams in the Dutch league, before he was appointed as coach of Ajax Amsterdam in 2017, and after a training period in his country that extended for 10 consecutive years, Kaiser had his first experience He was abroad when he led Al Jazira club in 2018, before moving to coach the current Portuguese league champion Sporting Lisbon for one season, in which he won the Cup, before returning again to the UAE capital Abu Dhabi in 2019.

Goals from outside the penalty area: 49.