Demarch Salikhova, rumors about Kvaratskhelia and Mukhin and Zabolotny's transfers to CSKA: what is being discussed after the end of the RPL season

Zarema Salikhova resigned from the board of directors of Spartak after the appointment of Ruy Vitoria as head coach of the team. Lokomotiv extended contracts with Marko Nikolic and Rifat Zhemaletdinov for three years. CSKA was strengthened by two footballers of the Russian national team, Anton Zabolotny and Maxim Mukhin. And the agent of Khvichi Kvaratskhelia admitted that he was negotiating about his client with Italian and English clubs. What is being discussed after the end of the RPL season is in the RT material. 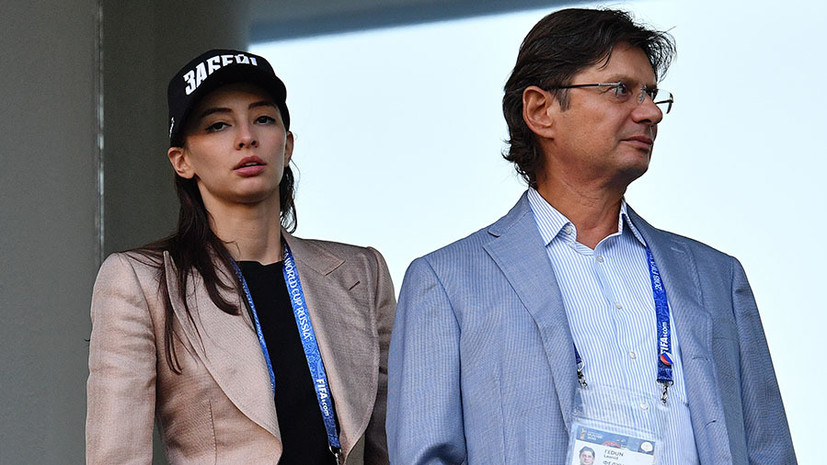 Almost two weeks have passed since the end of the Russian football championship, but Spartak continues to confidently hold the leadership in the information field.

On Monday, the team acquired a new head coach.

He, as the media suggested, was Rui Vitoria.

We signed a contract with a specialist for a period of two years.

However, not everyone in the club was satisfied with this decision.

In particular, Zarema Salikhova, the wife of the owner of the red-and-white Leonid Fedun, spoke out sharply against the invitation of the 51-year-old Portuguese.

In protest, she even announced her resignation from the board of directors of Spartak.

“I strongly disagree with the choice of the head coach for the team, the procedure for approving the candidacy and the club's transfer plan.

In this regard, I made a decision to leave the board of directors of Spartak.

I do not see the point of my further stay in this body and the operational management of the club.

From now on, my area of ​​responsibility is only the Spartak for Children Foundation, - quotes the words of Salikhova Sport-Express.

Apparently, in the near future the team will face a serious rebuilding for a new coach.

In the meantime, it does without losses.

Perhaps the most interesting transfer rumor to Muscovites was the information about the possible departure of Roman Zobnin to Europe, allegedly due to poor refereeing in the RPL.

The midfielder himself denied it, but stressed that he was ready to try his hand at one of the leading national championships of the Old World.

In the near future, Alex Kral can do this as well.

The British press reported that the Czech footballer held talks with five Premier League clubs at once.

His agent Karol Kisel confirmed that he had indeed made the trip to England.

According to the representative of Krala, more clarity will appear after the end of the European Championship.

Unlike Spartak, fans and journalists hardly discuss the strongest team in Russia, Zenit, although the club turned 96 on May 25.

And if they do, it is also in the context of news about red and white.

So, Salikhova, after leaving the board of directors, managed to painfully prick her principal rival.

She said that reports about the dismissal of the cleaning lady at Spartak “collect more clicks” than the championship of Petersburgers or “the demolition of the Lokomotiv stadium”.

Actor and musician Mikhail Boyarsky reacted most harshly to the passage of Fedun's wife. In his opinion, Salikhova does not understand anything about football. In response, Zenit's press service only posted a humorous post on Twitter with the words “Back to click”. However, later it was also removed.

At the same time, the champion also dispenses with newcomers so far. Although, according to domestic journalists, the team may soon be joined by Hakan Chalhanoglu, who in the season ended was one of the leaders of Milan, who took second place in Serie A. Turk scored four goals and gave ten assists in the national championship. The attacking midfielder's contract with the Italian club expires at the end of June, and therefore the Petersburgers can sign him as a free agent. At the same time, the footballer is in his prime - he is 27 years old, and the Transfermarkt portal estimates Hakan at € 35 million.

There was also information about the interest of the blue-white-blue to the goalkeeper of the Russian national team Yuri Dupin.

The Rubin goalkeeper has already stated that such offers are not refused, and expressed his readiness to move to St. Petersburg, if such an opportunity presents itself.

Lokomotiv's "move" and CSKA's work in the transfer market

But after the end of the season a lot of news came from Lokomotiv.

Firstly, it was not entirely clear whether Marko Nikolic would remain in the team.

As a result, the Serb still signed a new three-year contract with the club.

The agreement with Rifat Zhemaletdinov was extended for a similar period.

The story of the possible relocation of railway workers to Luzhniki also made a lot of noise.

Allegedly, the Lokomotiv stadium in Cherkizovo is planned to be demolished in the near future.

But the club's management denied this information.

Chairman of the Board of Directors Alexander Plutnik assured that the team will spend the new season in the old arena.

At the same time, he pointed out a number of its significant shortcomings.

“There was a request from the fans to improve the level of comfort at the stadium.

Many are unhappy with the fact that it is very cold here.

Also, the quality of the mass power supply in the arena is not very good since the power of the electricity is limited.

In the bowl itself, there are no conditions for high-quality service to fans due to various circumstances, "- quotes the functionary" Championship ".

Meanwhile, another top club in the capital, CSKA, is still the most active in the transfer market.

First, they announced the return of their own pupil Anton Zabolotny.

The forward of the Russian national team in the ended RPL season scored nine goals.

It is interesting that at the same place of work they were not too happy with the parting with the football player.

According to the owner of the club Boris Rotenberg, Anton “left Sochi without permission, without even warning him.

Later, CSKA announced the transfer of Mukhin and the signing of a five-year agreement with him.

Also, according to media reports, the red and blue are close to extending their contract for four years with midfielder Nair Tiknizyan.

Earlier it was reported that the graduate of the army team was supposed to go to Lokomotiv and was almost part of the deal for Mukhin.

Dynamo, however, not only does without newcomers, but is also left without a president.

On Friday, the club's official website published news “about the expiration of the employment contract” with Yuri Belkin.

The first acquisition has already been made by Rubin.

The composition of the team, which took fourth place at the end of the RPL season, was replenished by the Montenegrin left winger Seyad Hakshabanovic.

According to Transfermarkt, Kazan paid € 6 million for him. The midfielder spent most of his career in Sweden, but his dossier also includes two matches for West Ham.

According to his characteristics, the athlete is similar to Khvichi Kvaratskhelia.

He also has great dribbling and also boasts a strong shot and good passing.

In the last season of the Swedish Championship, Hakshabanovic scored seven goals and provided 12 assists with Norrköping.

But the departure of Kvaratskhelia, most likely, can be considered an almost resolved issue.

Last week, the Georgian father said that his son would not stay at Rubin.

The club, it seems, does not intend to keep the player with all its might.

Thus, the head coach of the team, Leonid Slutskiy, stressed that Khvicha was "ready for the next step."

“I’m so experienced, so often I’ve been in situations where the best players have left my team, that I’m more of a feeling of inner satisfaction.

I did my job well and helped the talent to reach a qualitatively new level.

I understand that there are football places where the player's development will be faster than in Russia, ”the specialist emphasized.

And the athlete's agent Mamuka Jugeli, in an interview with Nobel Arustamyan, informed about the interest in his client in Italy and England.

The midfielder himself said that he was ready to move to the top clubs in these countries, but was not going to leave Russia at any cost in the near future.

“I didn’t give the agent any instructions to leave Russia this summer.

I would like to play in Europe - I will do my best for this.

I am sure that sooner or later the transfer will happen.

When - I don't know, maybe this summer.

One way or another, Russia, the Premier League and Rubin are forever in my heart, ”said Kvaratskhelia.

Finally, one cannot but write about the state of affairs in the camp of RPL newcomers - Wings of the Soviets and Nizhny Novgorod.

The future of both teams is still rather hazy.

“I would not like to dive deeply into this topic.

The club has a major shareholder in the person of the government of the Samara region, there is a vision that, as it seemed to me, was changing, and approaches had to change.

And my participation too.

In fact, it turned out that we are returning to a certain scheme and path, which we have followed for many years.

The disagreements are mainly on sports issues, "Kalakutsky explained the reasons for the breakup.

The responsible post did not remain vacant for long.

Soon he was taken by Vadim Andreev, who previously worked, including in "Spartak".

The situation is even more complicated in Nizhny Novgorod, where, according to Match TV, only three players remained on contracts.

The rest, if you do not take into account the rented performers, will run out of them in the near future.

The team has no head coach.

Robert Evdokimov left the team at the end of last season, and the last matches of Nizhny Novgorod were held under the leadership of Anton Khazov.

However, there is a possibility that another young specialist Alexander Kerzhakov, who could not save Tom from the FNL, will take his place.

Moreover, the ex-striker of the Russian national team visited the city last week.

However, he himself urged "not to speculate on Instagram."

“I posted a photo of the stadium - so what?

When there is something specific, you will know right away ... Nothing has changed since the moment when I gave a comment on this topic, ”the coach said.