The great power Canada was the World Cup's biggest flop with three straight initial losses and only two goals scored. Tonight, the march towards recovery and the playoffs began with defeating Norway 4-2. The first fell already after 22 seconds but it would tremble to 2-2 before Canada switched away. - It was important for self-confidence, says Connor Brown. 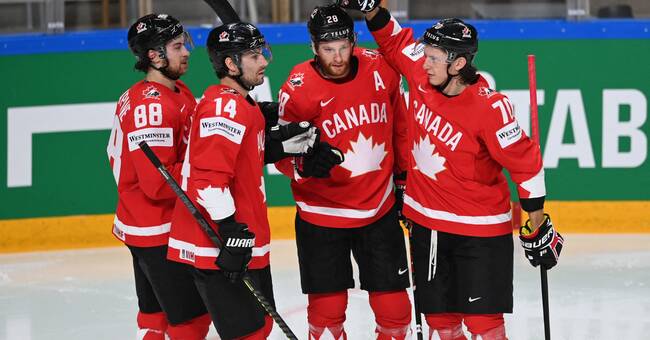 - Although Canada scored twice as many goals as in the three opening matches, but did not convince at all.

At the end of the second period, Andrew Mangiapane made it 3-2 for Canada.

He went down low and dug up the puck in the first left cross behind Färjestad's goalkeeper Henrik Haukeland.

In a numerical disadvantage in the middle of the third period, Canada decided when captain Adam Henrique pushed forward from the left edge and a little too easily put the puck between Haukeland's leg protection for 4-2, his second goal of the match.

Already after 22 seconds, Canada had the puck in goal.

It was video-watched as Connor Brown slid forward and pushed the puck in with a wide side.

However, it was perceived as a slowing motion and not as a kick and 1-0 to Canada was a fact.

- It was important for self-confidence to score goals in the first change.

I kept my skate on the ice and expected it to be approved, says Brown about his first international goal in SVT's broadcast.

At 2-0, Brown played until captain Adam Henrique in front of goal.

He made a pull and put in the puck with a backhand.

After half the match, Norway broke a play at Canada's blue line and Thomas Valkvae Olsen, with a past in Leksand, narrowed to fast and hard for 2-1.

80 seconds later, Frölunda's Mats Rosseli Olsen made it 2-2 after getting the puck on the skate.

The puck came rock hard from the side and Olsen barely managed to move. After a period of video review, the goal was approved and a relaxed Canada was shaken.

I have had so many chances, says Thomas Valkvae Olsen.