Mostovoy's dream of top championships and Dziuba's joke about Sobolev: how the Russian national team prepares for Euro 2020 in Austria

Russian national team striker Anton Zabolotny returned to the general group, while defender Mario Fernandez and midfielder Andrei Mostovoy continued to work on the individual program. The Zenit player expressed hope that soon his health will allow him to join his partners, and spoke about the importance of the current training camp for his future career. Forward Artyom Dzyuba also answered questions from journalists. He compared the atmosphere in the current team with the one that was before the 2018 World Cup, and joked about his partner in the attacking line, Alexander Sobolev. 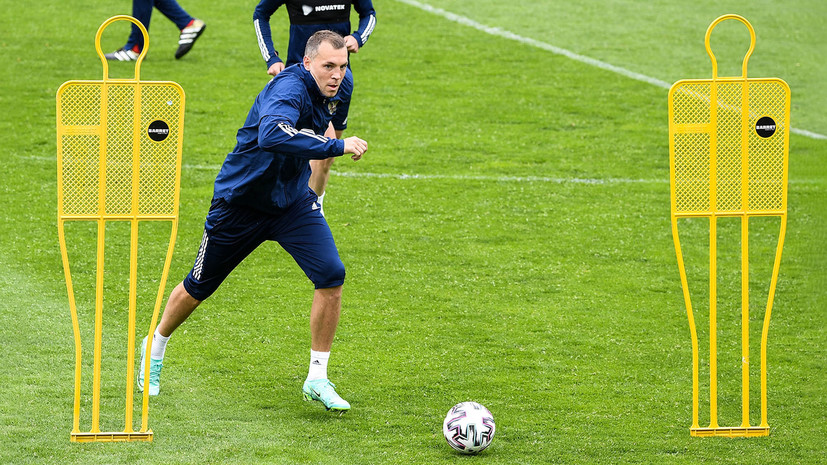 "One feels a huge responsibility"

The Russian national team continues preparations for the 2020 European Championship, as well as the pre-test matches with Poland and Bulgaria.

Compared to the previous days of training camp, CSKA striker Anton Zabolotny returned to the general group, who, however, spent the second part of the lesson separately from the rest of the players.

According to the individual program, the red-blue defender Mario Fernandez and Zenit midfielder Andrei Mostovoy, who are experiencing minor health problems, continued to work in the gym.

Andrey Mostovoy and Mario Fernandez are engaged in an individual program pic.twitter.com/VDA4KqNNiq

On Monday, Valencia midfielder Denis Cheryshev arrived at the base in Neustift, Austria.

On Saturday he took part in the final round of the Spanish championship against Huesca, coming on as a substitute in the 77th minute.

It is expected that on Tuesday other legionnaires - Atalanta midfielder Alexei Miranchuk and Monaco midfielder Alexander Golovin - will join the teammates.

After training, Mostovoy spoke about his physical condition.

According to him, he continues to undergo the necessary medical procedures and take medications, but he is already recovering and hopes to return to the general group in a few days.

“The main thing is that everything is good.

Better and better every day.

I feel a huge responsibility, I want to quickly enter the field.

I see how the guys are working and doing hard work.

I also have a job, but not like that.

Now the foundation is being laid, and I am missing it a little, ”Mostovoy is quoted as saying by“ Championship ”.

At the moment, the player spends most of his time with Fernandez, with whom he works on an individual program.

The language barrier does not interfere with the players, as the defender can speak Russian, and the midfielder knows a few words in Portuguese.

Mostovoy noted that the current call-up to the national team is of particular importance for him, since he improved in the second half of the season and earned the right to compete for a place in the final application for the tournament.

He also dreams of going to one of the leading championships, following the example of the famous namesake Alexander Mostovoy.

“We had a joint interview.

We can say that we know each other, but did not see each other in person.

I try not to listen to analytics, they don't always speak well there.

Every footballer has a dream of Europe, ask anyone.

Now is the right time for that, ”he added.

Summing up the results of the ended season, he admitted that Zenit had both ups and painful falls.

To the first he ranked the championship, to the second - the performance in the Champions League, where Sergei Semak's wards took the last place in the group, gaining only one point.

In early May, Mostovoy extended his contract with Zenit until the end of the 2023/24 season.

On this occasion, his team-mate Magomed Ozdoev joked that now the midfielder will have to lead the entire team to McDonald's.

“I don't visit him often, but it happens.

I don’t know why Magomed wrote that.

Alexander Medvedev kept walking and talking about the restaurant, but something didn't work out for us.

So Magomed said: “Let’s at least take us to McDonald’s.”

It seems to me that I did not have a rental option.

It so happened, and even not bad.

Maybe there was not much time, but everything that I was given - I used to the maximum, ”concluded Mostovoy.

"We are determined to plow and plow"

In addition to Mostovoy, one of the leaders of the national team, Artyom Dzyuba, also talked to journalists on Monday.

As one of the most experienced players, he compared the current position in the national team to what it was in 2018 before the home World Cup.

In his opinion, the strength of the current younger squad lies in its physical condition as well as discipline.

At the same time, three years ago, the national team was surrounded by much more negativity.

“Everything will depend on the results.

Our people treat football and football players in such a way that they are always dissatisfied with something.

We are preparing and we know what for.

They came here to plow, two days were hard.

This period would be over as soon as possible, and we would return to Moscow.

Everyone has their own opinion, let everyone stay with him.

Now we are preparing, we are looking at ourselves, we are determined to plow and plow, ”the striker explained.

He stressed that it is worth distinguishing between constructive criticism and the opinion of people who are trying to offend the players, although they themselves do not understand football.

It's like a plumber comes to me, and I'll tell him how to twist.

He will say: "Do it yourself."

They are popular, and there are those people who understand, ”said Dziuba.

The striker himself has his own tasks at the European Championship.

He plans to demonstrate the most reliable game and prove that he was not in vain entrusted with the captain's armband.

On the other hand, from that tournament I remember how everything unfolds sharply.

My task is to prepare well, not to let anyone in in terms of competition, to prove to myself and the team that you can rely on me.

I have no relaxation, ”Dziuba assured.

Not without humorous statements.

At first, the Zenit striker joked at his partner in the attacking line, Alexander Sobolev, and then responded to the words of the defender Igor Diveev, who compared him with the striker of the future rival of the Russians - the Belgian national team - Romelu Lukaku.

“Yesterday we played with Sobolev in who will score more into an empty net. We played somersaults. Sasha is undignified, not up to the end, but somersaults. His self-criticism is so-so, but a good guy. I do my best to get tanned to be like Lukaku. I do everything for Igor to make him think that I am him. I completely focused on this, so that Diveev thought that he was next to Romelu, ”Dziuba joked.