The activities of the World Endurance Championship in the Italian city of Pisa concluded yesterday with the crowning of the stars of the World Cup, which was held for a distance of 160 kilometers under the supervision of the International Equestrian Federation and sponsored by "Longines". 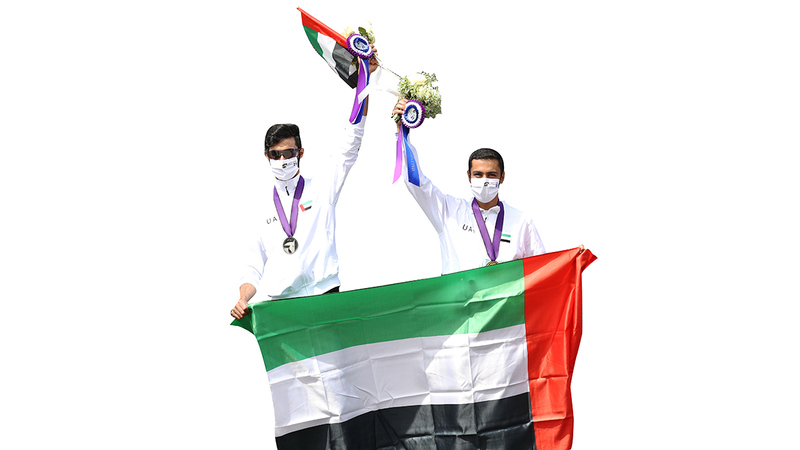 Rashid bin Dalmouk: Thank you to everyone who contributed to the great achievement

The activities of the World Endurance Championship were concluded in the Italian city of Pisa yesterday, with the crowning of the stars of the World Cup, which was held for a distance of 160 kilometers under the supervision of the International Equestrian Federation and under the auspices of "Longines". , By knight Salem Hamad Malhouf, champion of the race, and knight Mansour Saeed Al Farsi, runner-up.

The coronation ceremony took place in the village of San Rosor in the Tuscany region, as the Secretary General of the International Equestrian Federation, Sabrina Benez, crowned world champion Salem Hamad Malhouf with the gold medal, Mansour Al Farsi in silver, and Chilean knight Bonnie Viada in the individual category, while the Spanish team won gold The teams, the Brazilian in silver, and the French in bronze, in the presence of the country's ambassador to Italy, Omar Al-Shamsi, the managing director of the team’s mission, the Director General of the Dubai Equestrian Club, Major General Expert Muhammad Issa Al-Azb, the Secretary-General of the Equestrian Federation Dr. Ghanem Al-Hajri, and a number of Italian officials.

After the coronation ceremony concluded, the Emirati team’s mission returned to the country, after the successful participation in the global forum, which witnessed the participation of 32 countries from different continents of the world.

For his part, Sheikh Rashid bin Dalmouk Al Maktoum, Chairman of the Dubai Equestrian Club, affirmed that the Emirates Knights have proven their worth in the title and continued to lead in the world of endurance and endurance racing, to win the stakes and challenges, after the global achievement that was achieved thanks to the unlimited support enjoyed by the UAE equestrian. In general, the sport of endurance and endurance in particular, by His Highness Sheikh Mohammed bin Rashid Al Maktoum, Vice President and Prime Minister of the UAE and Ruler of Dubai, and His Highness Sheikh Hamdan bin Mohammed bin Rashid Al Maktoum, Crown Prince of Dubai and Chairman of the Executive Council, expressing thanks and gratitude to the team Work, and everyone who contributed to this dazzling achievement.

He said in a press statement: “This achievement is not strange to the Emirati knights, who continue to write their names in the list of champions, especially since the UAE has a record full of victories, and achievements that will remain engraved in the memory of history, most notably the coronation of His Highness Sheikh Mohammed bin Rashid Al Maktoum, with the World Cup title in the 2012 World Cup in the United Kingdom, and the coronation of His Highness Sheikh Hamdan bin Mohammed bin Rashid Al Maktoum, the World Cup of Endurance in 2014 in Normandy in the French Republic, in addition to the achievement of His Highness Sheikh Ahmed bin Mohammed bin Rashid Al Maktoum, President of the National Olympic Committee », The title in 2002 in Jerez, Spain.

■■ Major General Expert Mohammed Issa Al-Athb, Managing Director of the Emirates Mission and General Director of the Dubai Equestrian Club: “We value the efforts of all those who contribute to the success of the Emirati participation through the honorable appearance that sparked the issuance of all Emiratis .. The World Cup is considered a transit point for more achievements that aspire to Achieving the knights of the state, including the World Youth Championships and Junior, which Italy will host next September ».

■■ Knight Salem Hamad Malhouf, World Cup Champion of Ability: “The coronation is a simple part to give back to the homeland, and the competition was difficult until the last five kilometers of the race, but we were freed from censorship and pressure in the final stage of the representative of the Spanish national team, in addition to the Bahraini team.” .

■■ The knight Mansour Al-Farsi, World Cup summer runner: “Satisfied with winning the silver medal, which is considered an impetus for achieving more global achievements in the coming years, praising the performance of the horse Berman, who presented a distinguished level throughout the race, because of his energy reserves that led him to finish the task Successfully at the finish line, after he was able to outdo many competitors.

■■ Coach Mohammed Al-Sabousi: “Our knights have succeeded in conquering all challenges and difficulties, and they translated their long experience in endurance races by snatching the first and second places, and I commend the mare (Hala), led by Salem Hamad Malhouf, in addition to the distinguished presentation of the Emirates Knights team members, who They rode the elite of horses, hoping that Italy's achievement will be a new milestone for more titles. ”