Feelings for Spartak, Zenit transfers and Loko fans: what Tedesco, Semak and Nikolic talked about at the end of the season

Zenit head coach Sergei Semak denied rumors that the club's management was going to fire him after his failure in the Champions League. In addition, he responded to those who believe that the team can afford to acquire any footballer. Domenico Tedesco held a final press conference, at which he called on the Europeans to see for themselves the quality of Russian football. In turn, Lokomotiv coach Marko Nikolic thanked the fans for their support. 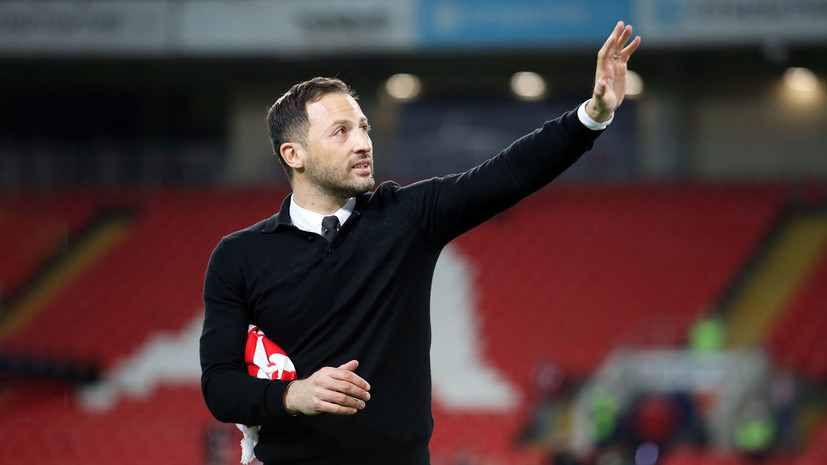 "To succeed in the Champions League, we need to strengthen ourselves"

The 2020/21 season in the Russian Premier League (RPL) has come to an end, and it's time to sum up the results.

The head coach of Zenit, which won the third championship in a row, Sergei Semak, noted the progress of his team and, in particular, the improvement of the game components.

At the same time, according to him, blue-white-blue should not be compared with Bayern Munich or PSG, which can be acquired by almost any player.

“Our competitors are also spending serious money on strengthening, perhaps it is not so noticeable.

In our case, only Malcolm's transfer stands out from the rest.

And through the prism of this transfer there is an assessment that Zenit can buy anyone.

But we cannot buy a player with a Russian passport from our competitors, because it is expensive, "Semak explained in an interview with Match TV.

After this failure, there were rumors that the club's management had decided to fire the head coach, as his contract allegedly contained a clause that the team should go to the European Cup spring.

He stressed that the main goal of the St. Petersburgers is to get into the Champions League, and not to enter the group, so there was no talk of resignation.

The specialist noted that for a more successful performance at a similar level, the team needs to strengthen the composition.

“To be successful in the Champions League, we need to strengthen ourselves.

It is necessary that everyone be in the ranks.

We need competition if instead of one of the attackers we can release only a player from Zenit-2.

Or change the player and move the midfielder to attack or the defender to midfield.

We do this during the season.

We don't have enough players of the level needed to complete challenges such as qualifying for the Champions League group.

We need to explain this to those people who want to hear something, ”the coach added.

"I can not be more direct and honest"

Meanwhile, Spartak said goodbye to head coach Domenico Tedesco in the runner-up and fulfilling the task of reaching the Champions League.

A screensaver with photographs of the specialist and the inscription “Thank you, Domenico!” Appeared on the facade of the Otkrytie Arena.

The German himself held a press conference, at which he last answered questions from Russian journalists.

He summed up his almost two years of work at Spartak and admitted that he has only warm feelings both for the team and its fans, and for Russia as a whole.

“I got fired from Schalke in the second season.

I told myself that I would try to keep the new club out of my heart, and I was defeated.

When I decided to come here, my friends asked: “Why?”.

RPL is not watched in Germany.

They need to come to Moscow, visit stadiums in Krasnodar, Volgograd.

You have many talents.

I love your football.

The only thing I can tell the Europeans is to come here and have a look ”, - quotes Tedesco Sport24 as saying.

According to the mentor, the most memorable moment for him was the victory of Spartak over CSKA in the quarterfinals of the 2019/20 Russian Cup with a score of 3: 2.

In addition, he especially remembered the match of the 29th round of the RPL against Khimki, after which Tedesco said goodbye to the home arena and the fans in a solemn atmosphere.

In addition, he thanked the management and all the staff of the club, colleagues from the coaching staff and the charges, especially highlighting the captain and vice-captain of the red-and-white Georgiy Dzhikia and Roman Zobnin.

“It was not easy for me to say goodbye to them.

They are very nice people.

There are many more wonderful moments awaiting this team.

I am sure that she will be able to take first place in the championship.

I am glad that we have such a relationship, ”admitted Tedesco.

After such warm words, Zobnin turned to the now former mentor.

“Thank you for your trust, coach!” The midfielder wrote on Instagram.

As his main achievement as the head coach of the red-and-white Tedesco called the development of the strong qualities of the players and the attraction of the youth - Pavel Maslov, Nail Umyarov, Ruslan Litvinov, Dmitry Markitesov.

He also admitted that he is “proud to be a part of Spartak's history and is ready to return to the team if required.

“In December I made the decision to leave.

You keep asking me about this.

Six months have passed, but I am asked the same questions.

I gave the club time to organize everything for the arrival of a new coach.

I couldn't be more honest and straightforward.

I have explained my solution several times.

It's really not easy for me, but the decision has been made, ”added Tedesco.

Portuguese coach Rui Vitoria is named as the German's successor.

According to Italian media reports, he will arrive in Moscow to sign the contract in the coming days.

It is noted that the agreement will be calculated for three years according to the "2 + 1" system.

"In the future, we need to collect many more trophies."

Like Semak, Lokomotiv head coach Marko Nikolic will remain in office next season, which he himself confirmed after the final round of the RPL.

Summing up the results of the Russian Championship, Nikolic thanked the fans who supported the team even in a difficult period.

“We have a saying in Serbia:“ It's not always easy, but always beautiful. ”

So it was with us this season.

I also want to thank you, especially for your support in the second part of the season.

Thank you so much.

And I must also say: I hope that we have just started, and in the future we need to pick up many more trophies.

Thank you! ", - the press service of Lokomotiv quotes the specialist.

Although the "railroad workers" lost to "Spartak" in the race for the second place, the team became the winner of the Russian Cup.

It was this result that the former coach of the team Yuri Semin called the most significant episode of the season against the background of several “failed games”.

“Am I calm about the future of Lokomotiv with Nikolic?

As with Salzburg - an important match, right?

You go to the Europa League, put in seven defenders and lose at home.

How can I be calm? ”Semin complained on Match TV.

At the end of the season, the "railroad" also expected a sad episode.

Back in March, it became known that Vedran Chorluka, a veteran of the team, who more than once took her to the field as captain, decided to end his career.

Horvat spent nine years in the camp of the red-greens, during which time he became the champion of Russia and four-time winner of the Cup of the country.

“Thank you for every second throughout these nine years.

It was a pleasure for me to play for this wonderful team and meet so many phenomenal people along the way.

But the time has come for the new players to feel what I have felt all these years, ”wrote Corluka.