Video ... Atletico is close to the LaLiga title, Real Madrid clings to hope, and Barcelona loses its stadium.

Atletico Madrid are just one victory away from the La Liga title victory after beating Osasuna 2-1, and Real Madrid stuck to their weak hope for the title with a 1-0 victory over Athletic Bilbao in the 37th round. 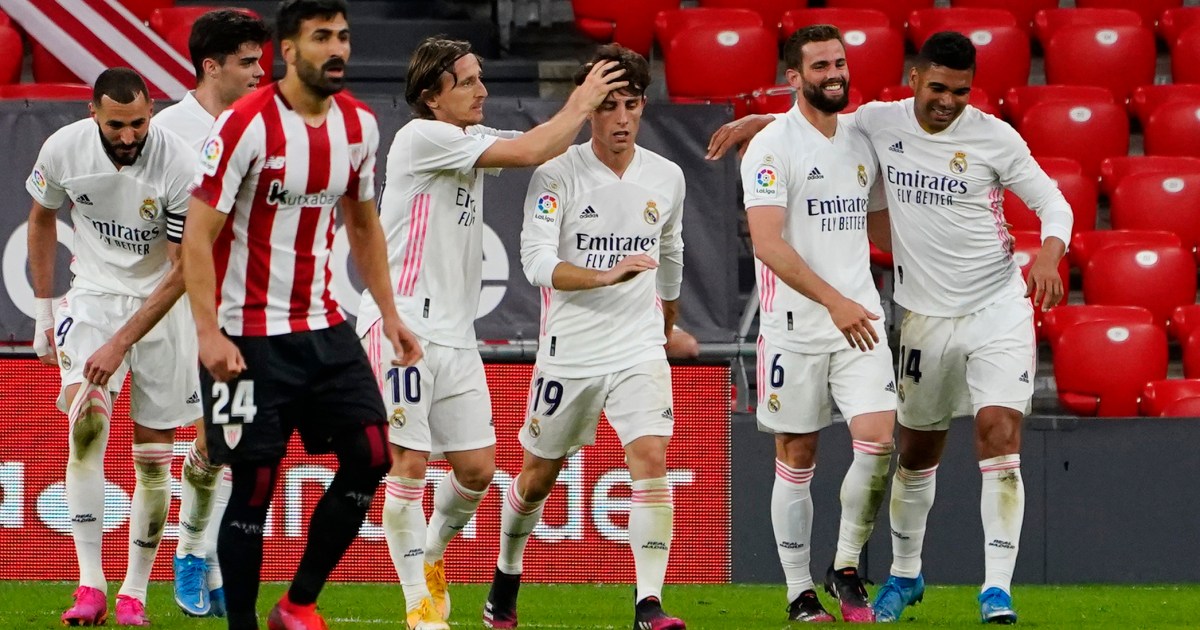 Atletico Madrid are just one victory away from the La Liga title victory after beating Osasuna 2-1, and Real Madrid stuck to their weak hope for the title with a 1-0 victory over Athletic Bilbao in the 37th round of the League.

In another match in the same round, Celta Vigo turned from delaying a goal to a 2-1 victory over Barcelona at Camp Nou, to deepen the crisis of the Catalan team.

Real Madrid kept their hopes for the title race alive after they beat Athletic Bilbao in San Mames, thanks to a goal by defender Nacho Fernandez in the second half.

The most valuable goal of Nacho Fernandez 😯😯😯

In the first half, with few opportunities, Real Madrid demanded a penalty kick, after Alvaro Odriozola crossed the ball that touched John Murcio's arm, but referee Antonio Matteo Lahues indicated the continuation of the play.

Bilbao almost opened the scoring before the break, but Alex Beringauer fired a free kick that went past the post to goalkeeper Thibaut Courtois.

The crossbar hit back with a header from Casemiro after the break, before the Brazilian player sent a cross from the right side that Nacho turned from close range to the precious victory goal of Zinedine Zidane's team.

Substitute Raul Garcia, the Bilbao player, was sent off at the last minute, as the atmosphere of the match increased tension.

Who will be the champion of the season?

Atletico Madrid came close to claiming the La Liga title after fought and turned from behind to a dramatic 2-1 victory over Osasuna thanks to Luis Suarez's last-minute goal.

Atletico dominated the game and scored twice in the goal in the first half, before canceling two goals for offside, but was late with a goal scored by Ante Podemir with a header in the 76th minute, and goalkeeper Jan Oblak tried to clear the ball, but he did so from inside the goal.

Atletico responded and substitute Renan Lodi equalized in the 82nd minute, before striker Suarez scored the winning goal in the 88th minute.

Diego Simeone's side nearly conceded a goal in the final seconds when Chimi Avila hit a powerful ball, but goalkeeper Oblak narrowly saved it to keep his club on top of the competition.

Atletico will play Real Valladolid in the final round next Sunday, and it is enough for him to win the title, regardless of the outcome of Real Madrid's match with its guest Villarreal, while the royal hopes to win and Atletico falter to win the title.

Barcelona also continued its poor results and lost at home 1-2 to Celta Vigo, to stop its score at 76 points in third place.

Barcelona at Camp Nou failed to maintain their lead with a goal scored by Lionel Messi in the 28th minute.

Creativity does not end with # Messi 👏 # Barcelona # La Liga pic.twitter.com/FmZqK53fpq

Santi Mina tied for Celta Vigo in the 38th minute, before adding the winning goal for his team in the 89th minute, bringing his tally to 53 points in eighth place.