Alexander Golovin scored the ball and gave an assist in the match between Monaco and Rennes and saved his team a chance to win the French championship. Earlier, the Russian also helped the club to reach the final of the National Cup. Barcelona lost to Celta and ended the fight for the win in Example. Liverpool goalkeeper Alison Becker scored in the 95th minute of the Premier League match against West Brom and allowed the Liverpool team to continue their fight to qualify for the Champions League. 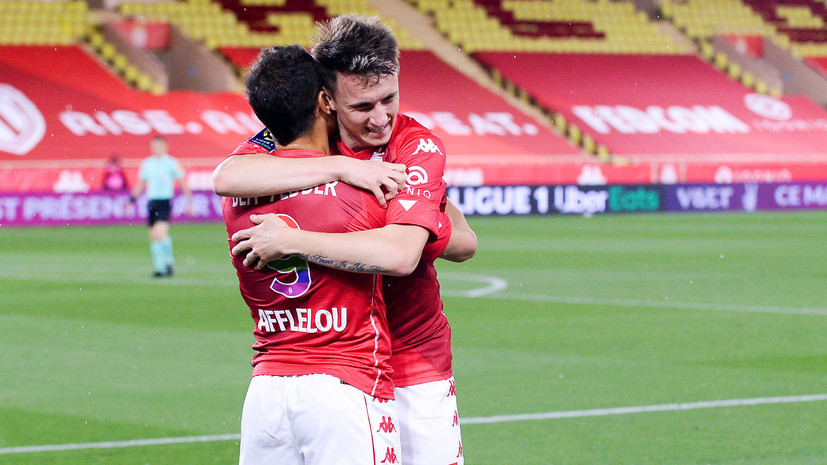 End of the Barcelona championship race

Barcelona have finally finished the fight for the championship.

In the penultimate round of Examples, in which all matches were played simultaneously, Ronald Koeman's charges lost to Celta at home (1: 2).

Before the game, the Catalans were four points behind Atlético and two behind Real, so theoretically they could only stay in the fight for gold if they won.

The match began with hope for Barcelona.

Lionel Messi scored his 30th national championship goal and confirmed that he will finish the season as the top scorer of the tournament for the eighth time.

But at the end of the first half, Santi Mina answered his goal, and in the penultimate minute of the match, the Spaniard scored a double.

By that time, the Catalans were in the minority because of Clement Langlet's two yellow cards, received within ten minutes.

Barcelona have brought their unbeaten streak to three matches and for the first time in 13 years will not even be the vice-champion of the country.

Sevilla could take advantage of the failure and drop her to fourth place, but she lost to Villarreal (0: 4), in which Carlos Bacca scored a hat-trick.

It was he who brought Atletico Madrid an extremely important home victory over Osasuna (2: 1).

The account in this game was not opened for a long time, until Ante Budimir scored in the guests at the 75th minute.

But Diego Simeone's charges managed to turn the game around in the remaining time thanks to goals from Renan Lodi and Suarez, who brought Atletico victory for the tenth time this season.

The Uruguayan waited almost two months for his 20th goal and ended up giving Atlético a chance for their first title in seven years.

To do this, Madrid need to beat Valladolid away in the last match of the season.

The championship could have been formalized as early as Sunday if Real Madrid lost points.

However, he avoided a draw, to which the match with Athletic in Bilbao stubbornly went.

The zeros on the scoreboard burned until the 68th minute, when Nacho still scored the only goal after a corner kick.

Real Madrid retained a two-point gap from Atlético, which will now be able to win back only in case of a victory over Villarreal in a week, with a loss of points by its main competitor.

In Italy, the struggle continues for two tickets to the Champions League.

In the penultimate, 37th round of the national championship, Atalanta joined Inter, guaranteeing themselves a performance in the main European Cup.

For getting into the top four continue to fight Napoli, Milan and Juventus.

Alexey Miranchuk's team won a difficult away victory over Genoa with a score of 4: 3.

The Russian in this meeting gave the pass to Mario Pashalich.

As it turned out, it was this goal in the 51st minute that was victorious for the Bergamasks, who were scored by ex-Rostov player Eldor Shomurodov.

In the next match of the round, Juventus hosted Inter, and the outgoing champion gave a fight to the new owner of the scudetto (3: 2).

The victory was not easy for Turin - in the middle of the first half, goals were exchanged between Cristiano Ronaldo and Romelu Lukaku, and before the whistle for a break, Juan Cuadrado managed to score.

However, in the 55th minute, the hosts were left in the minority due to the second warning by Rodrigo Betancourt, and seven minutes before the end of normal time, Giorgio Chiellini deprived his team of the lead by an own goal.

Fortunately for Andrea Pirlo's charges, they managed to get the right to a penalty, which was converted by Cuadrado.

After their match, Juventus temporarily moved up to third place, but on Sunday, Napoli and Milan pushed it down to fifth.

For this, the Neapolitans needed to beat Fiorentina away (2: 0).

The home team was not helped by Alexander Kokorin, who remained in reserve in the third match in a row.

The Milanese had enough of a goalless draw with Cagliari.

Before the final games, Atalanta win two points against Napoli and Milan and three against Juventus.

Much in the 38th round will be decided in the Atalanta - Milan match, but even if the Bergamasks are defeated and the points are equal with Juve, Gian Piero Gasperini's team will be higher in the standings in terms of additional indicators.

Golovin's two chances for the title

The French championship managed to keep the biggest intrigue.

Three teams continue to claim the title by the last round.

Among them is Monaco, which should thank Alexander Golovin for such a chance.

The Russian footballer became the protagonist of the meeting with Rennes (2: 1).

In the first half hour of the game, he gave an assist to Wissam Ben Yedder, and then scored his fifth goal in the current League 1. True, in the second half his teammate Axel Disasi cut the ball into his own goal, but this did not prevent Monaco from celebrating the victory.

The leader of the standings broke a streak of three victories and broke with Saint-Etienne (0: 0).

Now Monaco is three points behind him and theoretically can still come out ahead.

True, for this it is necessary not only to close the gap in the last round, but also to come out ahead in terms of the difference between goals scored and conceded.

And do not forget that PSG continues to fight for the championship.

In the 37th round, he defeated Reims in his field, which was in the minority at the tenth minute.

As a result, four unanswered goals flew into the gates of the guests.

After this victory, the Parisians lose to Lille by only one point, and it will still be easier for them to fight for the title than Monaco.

But Golovin has another way to end the season with a trophy.

The semifinal matches of the French Cup were also held last week.

“Monaco” in it defeated with a score of 5: 1 the club of the fourth most powerful division “Rumiyi Vallière”.

The last of the five goals of the Monegasques was scored by the Russian midfielder.

On May 19, the club will play in the final against PSG, who confirmed their participation in the decisive match only after a penalty shootout against Montpellier.

After the penultimate round in the German championship, the silver medalist was determined.

Leipzig repeated their best achievement when they finished second in the Bundesliga in their debut 2016/17 season.

But lately, the fans of the youngest club of the tournament could not be sure that the finish of the season would be successful for them.

Leipzig were particularly unlucky in the matches against Borussia Dortmund.

A week ago, Julian Nagelsmann's wards lost to her in the national championship, and on May 13 they were faced with a defeat in the German Cup final (1: 4).

With doubles from Erling Holland and Jason Sancho, Borussia Dortmund won the trophy for the fifth time.

In this status, she immediately beat Mainz and brought the winning streak in the Bundesliga to six matches, and at the same time reduced the gap from Leipzig to three points.

To prevent the struggle for silver from escalating, Nagelsmann's charges had to play at least a draw with Wolfsburg in the 33rd round at home, which also retained the chances for second place. At the end of the first half, it was the guests who were leading with a score of 2: 0 thanks to the double of Maximilian Philip, rented from Dynamo Moscow. But the guests did not manage to keep the victory. Leipzig achieved a draw, which left Borussia and Wolfsburg between themselves to find out who would take third place at the end of the season.

At the same time, both teams received tickets to the Champions League.

At the beginning of May, Eintracht could still claim it, but Frankfurt had a terrible end to the season and did not win any of the last three matches.

Finally, the team's dreams of the main tournament in Europe were shattered after the defeat to Schalke (3: 4), which this season became the worst team in Germany and long ago secured a relegation to the second Bundesliga.

A week of Leicester's wins and Manchester United's failures

The past week has been very successful for Leicester. It began with a match against the exhausted Manchester United. The charges of Ole Gunnar Solskjaer had to play with the Foxes on Tuesday, and two days later they had to hold a meeting with Liverpool that had been postponed because of their own fans. Because of this, the Mancunians in the first game put up a predominantly reserve squad. Leicester, just fighting the Merseysides for the third place in the Premier League, took advantage of this gift and beat Manchester United in the Premier League for the first time since September 2014 - there were no victories over this team even in the 2015/16 championship season.

Having played their 36th game ahead of time, Leicester was able to focus on the FA Cup final over the weekend against Chelsea.

The Foxes reached the decisive match of the tournament four times and never celebrated victory.

This time, luck smiled at them.

The outcome of the meeting was decided by the only goal by Jüri Tielemans from outside the penalty area, which did not follow from the logic of the game.

Leicester have won the world's oldest club trophy for the first time in their history.

Manchester United did not manage to prepare for the match with Liverpool.

The more motivated players of Jurgen Klopp, who need to fight for access to the Champions League, won 4-2 thanks to a double by Roberto Firmino.

At the end of the week, Manchester United players were finally able to rest, and the Lersisides needed to continue to score points in the Premier League.

They almost failed their mission in a meeting with West Bromwich already relegated to the Championship. But goalkeeper Alison Becker saved Klopp's team. He became the hero of the meeting not because he impeccably defended the gate. On the fifth added minute, when the score was 1: 1, the Brazilian went to help with a corner kick and scored the winning goal with his head. Becker became the first goalkeeper in Liverpool history to score a goal in an official match. With this blow, the goalkeeper allowed his team to get closer to the top four of the standings. With two rounds to go to the end of the season, the Merseysides can still beat not only Chelsea but Leicester as well.