Without the Gagarin Cup winner and with seven NHL legionnaires: the composition of the Russian national ice hockey team at the World Cup in Latvia was announced

The coaching staff of the Russian national ice hockey team has announced the preliminary composition for the 2021 World Cup. It included 26 hockey players, including seven representatives of the NHL clubs. At the same time, at the end of the final stage of Euro Hockey Tour, the captain of the national team at the Czech Games Yegor Yakovlev and the current winner of the Gagarin Cup with Avangard Denis Zernov were removed from the list. Who got into the Russian national team for the planetary championship in Latvia - in the material RT. 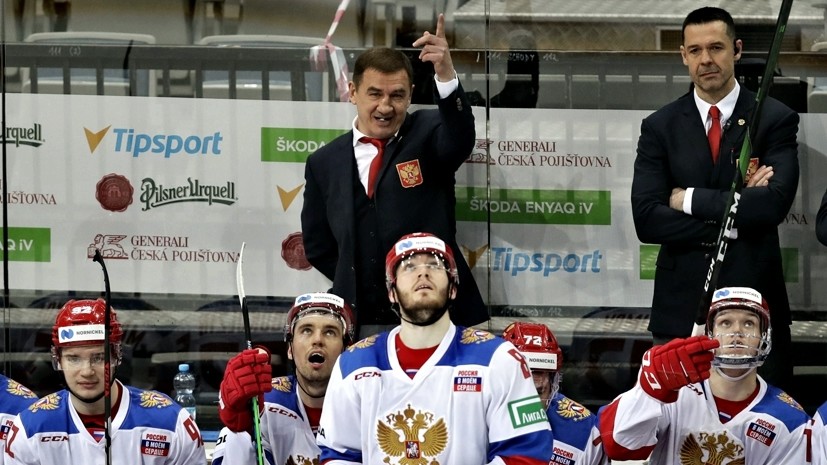 The head coach of the Russian national hockey team, Valery Bragin, has named the preliminary squad for the 2021 World Hockey Championship. The list includes 26 hockey players: two goalkeepers, nine defenders and 15 forwards. Thus, in the application of the domestic team there are two free places. As the mentor said at the end of the Euro Hockey Tour's final stage match with the Czech Republic, they are intended for the goalkeeper and the forward. However, he did not rule out that they can be occupied by legionnaires from the National Hockey League.

Taking into account the late start of the NHL playoffs and the abundance of refuseniks, the backbone of the Russian national team at the planetary championship in Latvia will be the KHL players.

Traditionally, the largest representation was received by SKA and CSKA.

The third place in the number of invitees was taken by Lokomotiv Yaroslavl with defenders Rushan Rafikov and Alexey Marchenko.

In addition, three more hockey players will go to Riga together with the national team and will study according to an individual program, being in a “bubble”.

We are talking about goalkeeper Ivan Bocharov, as well as strikers Vasily Podkolzin and Ilya Safonov.

In addition, forward Kirill Marchenko and defender Kirill Kirsanov will also train in the capital of Latvia.

Apparently, two of them will get into the final squad, if help from the NHL does not arrive.

As for the legionnaires included in the application, in total there were seven of them. The defensive line received the greatest strengthening, which was replenished at once by five performers. In addition to Vladislav Gavrikov, who confirmed his arrival in advance, Artyom Zub, Nikita Nesterov, Nikita Zadorov and Ivan Provorov will perform in Latvia. This season, the Philadelphia hockey player scored 26 points (7 goals, 19 assists) and finished second in scoring among the Russians, behind only Mikhail Sergachev of Tampa Bay. Among other things, he won the Barry Ashby Trophy as the Flyers' best defender for the third year in a row.

Taking into account the latest results, the defense of the Russian national team clearly needed strengthening.

In three matches of the Czech games, Bragin's wards conceded 12 goals - the worst indicator among all the participants in the tournament.

Among other things, the defenders not only did not always act confidently at their own goal, but also often earned penalties - 18 penalty minutes in total.

⚡️According to the results of a three-week training cycle, the headquarters of the Russian national team named the players who will go to Riga to participate in the World Championship.

“I believe in Samonov, unfortunately, Bocharov and Fedotov do not live up to expectations. NHL defenders will help the goalkeeper, the most important thing is that the attack scores. Still, in two games with the Czechs and the Finns, one puck is not enough. Of course, everything is under load, and the world championship will be tough, ”TASS quotes Vladislav Tretyak, head of the Russian Ice Hockey Federation (FHR).

Nevertheless, if the defense received more than a qualitative strengthening, then the same cannot be said about the attack. In addition to Mikhail Grigorenko from Columbus, who took to the ice during the confrontation with the Czech Republic, Alexander Barabanov will join the team in Latvia. This season, the former SKA striker managed to try his hand at both Toronto and San Jose, but so far he has not really succeeded. In 22 matches, he scored only eight (3 + 5) points and ranks 20th in terms of the number of points on average per game among Russians (0.36). It is noteworthy that just a colleague from the Blue Jackets (0.38) is located one line higher.

Taking into account the arrival of seven legionnaires, the composition of the Russian national team has significantly expanded, in connection with which the coaching staff had to refuse the services of a number of performers.

But if the departure of Mikhail Naumenkov, Dmitry Yudin, Daniil Pylenkov and Pavel Kraskovsky was hardly a surprise, then the decision to unhook Yegor Yakovlev and Denis Zernov from the team could have caused surprise.

The defender of Metallurg Magnitogorsk wore a captain's armband at the Czech Games and was in the first line of defense, and the Avangard center forward was considered one of the most creative representatives of his role in the current squad.

In the absence of Yakovlev, CSKA forward Anton Slepyshev will take over the duties of the captain.

At the same time, he will have nine assistants at once, including partners in CSKA in the person of Konstantin Okulov and Maxim Shalunov, as well as SKA forward Anton Burdasov.

It is worth noting that the coaching staff of the Russian national team took a risk, including Evgeny Timkin in the composition for the World Cup.

Although the SKA striker did not score a single point during the Czech Games, he made a very interesting top three with Vladislav Kamenev and Artyom Shvets-Rogov.

Perhaps that is why Bragin did not exclude him from the composition, even despite the potentially serious injury.

“It's hard to tell from Timkin, the puck hit an open place.

We hope there is nothing serious there, but he has a serious injury, "Bragin admitted after the match with the Czech Republic.

Among other things, the coaching staff of the Russian national team has undergone changes.

Due to health problems, goalkeeping coach Rashit Davydov could not go to Latvia with the team, as a result of which a foreign specialist temporarily took over his position.

“Goalkeeping coach Rashit Davydov will not be able to work at the World Championship. In the last two weeks, the specialist has been experiencing high blood pressure. The medical service of the national team considers it dangerous to risk his health. Davydov will be replaced by goalkeeping coach Stefan Persson, who has worked for Spartak for the last five seasons. The headquarters of the national team wishes Rashit Abdulkhakovich health and return to work, ”the FHR said.