"Be careful with your statements": how the conflict between the UFC fighter Chimaev and the Nurmagomedov family ended

Mixed martial arts fighters Khamzat Chimaev and Abubakar Nurmagomedov started a squabble on social networks. The reason for the dispute was Chimaev's challenge to former UFC champion Khabib Nurmagomedov. The athletes exchanged provocative remarks, but in the end the conflict was settled. 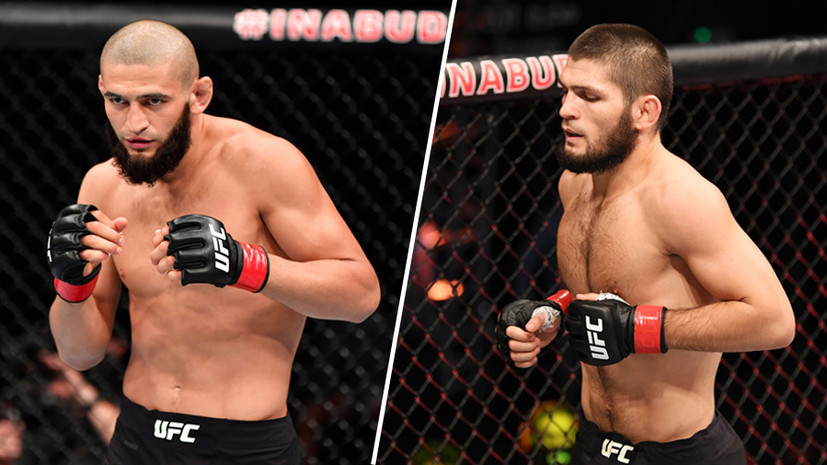 The Swedish fighter of Chechen origin Khamzat Chimaev, with his recent words about Khabib Nurmagomedov, provoked a new conflict in Russian MMA.

After his claim that he would "break" the former UFC champion, a skirmish began on social networks between the 27-year-old fighter and the Nurmagomedov family.

It all started with a short comment by Chimayev, left live by the head of Chechnya, Ramzan Kadyrov, on Instagram.

During a stream in which the politician called Nurmagomedov a "100% UFC project" and offered to fight for any money with the Akhmat fighter, the Swedish athlete wrote: "We will break him if he wants to."

He accompanied his commentary with the image of a wolf - probably a reference to the nickname Chimaev.

The undefeated fighter himself did not react in any way either to Kadyrov's statements or to Chimaev's attack.

However, his cousin Abubakar Nurmagomedov, who plays in the UFC, stood up for him.

In his post on Instagram, he reminded Chimaev of how warmly Khabib's team treated him before, and told subscribers about the fighter's moves from Russia to Sweden and back.

“Khamzat, I see you quickly changed your shoes.

After moving to Sweden and writing a complaint against your own Chechen Republic that you were being infringed upon, you received documents for a good life in Sweden.

But now, having gained fame, you, I look, have changed.

Now you have come back and live in Chechnya, and everything is fine with you.

I'm happy for you.

Until recently, in America, you sat and ate at the same table with us, trained in the same gym, went to the mosque together and you called us brothers.

And now you write that you will tear someone up.

Yes, I agree, everyone has the right to express their opinion.

But be careful with your statements, ”Nurmagomedov warned.

In the MMA environment, Chimaev has earned himself a reputation as an athlete who allows too many comments about his colleagues.

Recently, the UFC light heavyweight champion Jan Blakhovich from Poland even said about the Chechen fighter that "he has already won all the UFC championship belts on the Internet via Twitter."

He really did not disregard the words of Nurmagomedov and spoke out rather harshly in response.

“Yes, I live where I want, horseman!

I’m probably a sloppy guy, but you, Abubakar, knocked gently!

Tell our European brothers, Dagestanis, that there is no need to come to Europe and say that “we are Chechens,” Chimaev said.

Abubakar Nurmagomedov responded to this with a new post on social networks.

He called on the Swedish fighter to be responsible only for his words and practically repeated what Blakhovich described Chimaev.

“Khamzat, why do you translate the topic into the plural if we are talking about you personally? Either you say in the plural “we will break it,” then you talk about the Dagestanis. Answer for yourself personally, or do you have a motto "We are alone and you are alone"? And as for whether or not I knocked, I will say this: for me this is a sport. I am not trying to become some kind of great champion and I am not shouting to the whole world that I will break or tear someone. It is you with us, who tears or breaks everyone (only in words). We are talking about personal qualities that we must possess as Muslims and neighbors of fraternal republics, ”said the Dagestani fighter.

In response, Chimaev posted a video with Khabib Nurmagomedov, in which he surrounded Artyom Lobov with his team in 2018.

It was a hint that the former UFC champion himself did not sort things out alone.

Chimaev confirmed this with a message in which he directly pointed to Orel.

If you had something to say, you had to contact me, and not play for the audience.

We'll see you there, in America, boy!

When your brother shouted to the whole world that he would smear anyone - that was confidence, I can't be sure? "

Fortunately, the quarrel between the two fighters ended there.

Quite quickly, Chimaev removed all his posts addressed to Abubakar Nurmagomedov, and explained his actions with respect for the residents of Dagestan.

“There is no need to switch to nationality, I have brothers Dagestanis, out of respect for them I removed posts.

We will talk to him personally, I will leave this Internet to him!

He posted an excerpt from an interview with Khabib's father Abdulmanap Nurmagomedov.

On it, the coach who died last year said that his son would not play in the UFC if the Chechen fighter Zubair Tukhugov from his team was disqualified.

Makhachev accompanied his post with the inscription "We were just brought up differently."