Rubin is motivated, so Rotor has little chance ": Aldonin, Ananko and Juran on the fight for European cups and survival in the RPL

The Rotor players are in poor physical and psychological condition, so the club has little chance of retaining a residence permit in the RPL, former CSKA and Russian national team midfielder Evgeny Aldonin said in an interview with RT. In turn, ex-Spartak defender Dmitry Ananko expressed hope that in the match between Ufa and Arsenal the winner will be determined on the football field. And the former Khimki mentor Sergei Yuran noted that the Moscow Region team will try to take points from Sochi, despite the lack of tournament motivation. 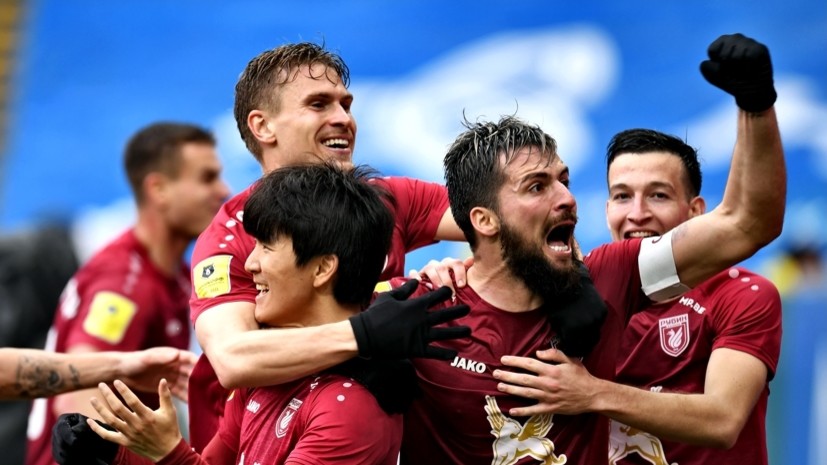 "Volgograd residents can only grit their teeth and endure"

Rotor's footballers failed to live up to the expectations of the fans and had an unsuccessful 2020/21 season, therefore they are among the main candidates for relegation to the FNL.

About this in an interview with

said the former midfielder of CSKA and Rotor Evgeny Aldonin.

He also highly appreciated the results of "Rubin" and called Leonid Slutsky's wards favorites in the confrontation with the Volgograd in the 30th round of the RPL.

- “Rubin” with a high degree of probability will break through to the European cups, and with a favorable coincidence of circumstances, for the first time since 2010, it will become the winner of the RPL.

How surprising is this, given the competition in the RPL and the rather modest set of performers among Kazan residents?

- Rubin has a good league title.

Even if they do not make it into the top three, but only in the European cups, the season for Kazan can still be considered successful.

First of all, this is the merit of the coaching staff.

Because the team was regularly updated, there was no strong backbone.

And now a very good competitive environment is being formed.

If we manage to keep the leaders, then next season the team will fight for the highest places.

- Slutsky can upset the fans from his hometown by sending Rotor to the FNL.

Does this add additional intrigue to the match?

You have to understand that homeland and friends are all beyond the field.

And on it there is a struggle and points that can bring benefit to the team in which you work.

- In the last six games, Rotor have suffered five defeats, conceding 15 goals, while Rubin have won five wins and have not conceded a single goal four times.

What is the chance of Volgograd residents in the upcoming meeting?

- At the end of the season, Yuri Baturenko's charges had a very difficult calendar.

It is clear that this is not an excuse.

A series of defeats suggests that the team is in poor physical and psychological condition.

Volgograd residents can only grit their teeth and endure.

Rubin is motivated, so Rotor has little chance of survival.

- Rotor runs the risk of being knocked out of the RPL in the first season.

Why did the Volgograd team fail to gain a foothold in the Premier League?

- To a greater extent, this is a question for the club's management.

I feel very sorry for the Rotor fans.

They were waiting for a return to the Premier League, pinned great hopes on the team, but they did not live up to them.

If it were not for the coronavirus, I am sure that a full stadium would constantly gather in Volgograd.

It is a city with great football traditions.

- Yuri Dyupin, Ilya Samoshnikov and Denis Makarov are included in the extended list of the Russian national team to prepare for the European Championship.

Can this meeting influence Stanislav Cherchesov's decision to be included in the final application, or will the specialist draw conclusions based on the results of the training camp?

- This match is unlikely to globally affect the performance of these players at the European Championship as part of the Russian national team.

But they can form an even more favorable impression of themselves.

Getting on the extended list is a great help and compliment for them.

They cannot be satisfied with what has already been achieved and must show all their best qualities in every match.

To play for the national team, you need to demonstrate stable and high-quality football over the course of a large number of games.

"Wards of Cherevchenko will not serve the number"

The Khimki players are hungry for victories and will try to beat Sochi at home in the final round of the RPL.

This opinion was expressed by the former mentor of the Moscow Region team Sergei Yuran.

He also disagreed with the wording that Vladimir Fedotov's team could be called Zenit's farm club.

- Over the past seasons there has been a lot of talk and jokes about Sochi being the farm club of Zenit St. Petersburg.

What does the fact that, despite all this talk, Vladimir Fedotov's wards are fighting for the RPL medals, speaks for?

- As far as I understand, Sochi is financed by a private sponsor.

Therefore, these parallels are misplaced.

The team proves its worth by playing and has every chance of getting into European cups.

And the management wants not only to invest in the club, but also to make a profit by performing on the international arena.

And "Zenith" has nothing to do with it.

- In the last three rounds, Sochi won victories at the end of matches, and not with the simplest rivals.

Does this indicate that the team has acquired the same character inherent in the leading teams?

- This suggests that the coach knows how to convey to the players that you have to live with the result until the last minute.

It is clear that there is no lack of luck in football.

But this is mainly the work of football players.

The team plays to the limit and wins.

Obviously, the professional attitude of the players to their work.

- In the summer, several leaders may leave the club, including Anton Zabolotny.

Could this affect the motivation of the players in the upcoming meeting?

After all, the same forward runs the risk of being left without European cups, if Sochi bypasses CSKA in the standings.

- The players probably have bonuses for getting into European cups.

This is also an important part of motivation.

In any case, you need to work out your contracts to the end.

And you need to think about the next season after the end of the current one.

- Getting into European cups will be a tremendous success for the regional team, but where are the guarantees that it will be able to defend the country's honor better than Rostov, which failed in the Europa League?

- I think sponsors and coaching staff understand that the team needs strengthening to participate in European competitions.

Because you will probably want to fight for the exit from the group.

I don't think that in Sochi everything will be left to chance.

- From a tournament point of view, Khimki does not need anything in the upcoming meeting, unless Dynamo loses to CSKA, and in the end of the championship Igor Cherevchenko's team does not look as bright as in the middle.

Will the mentor be able to force the players to play to win?

- Firstly, no one canceled the bonuses for the matches won.

Secondly, you always want to finish on a high note the last match of the season in front of your fans.

I know this team, these guys - Cherevchenko's charges will not serve out a number on the football field.

They are in their first season in the Premier League and are hungry to win.

So Sochi will not be easy with Khimki.

This season, the Moscow Region team has demonstrated that it is worth reckoning with.

The return of Shamil Gazizov has become a serious boost for Ufa and will contribute to the growth of the club in the future, said former Spartak defender Dmitry Ananko.

The famous footballer in the past also expressed hope that the meeting between the charges of Alexei Stukalov and the Tula "Arsenal" will not be overshadowed by the referee scandal, and the winner will be determined on the field.

- "Ufa" for the first time after getting into the RPL runs the risk of flying to the FNL.

Is this a direct consequence of the CEO leaving the club at the start of the season?

- Shamil Gazizov is an iconic figure for Ufa.

His return is a major boost for the club.

I am sure that this event will contribute to the further growth of the team.

Including for the reason that he worked in a top club and gained invaluable experience.

- Many sang praises to Alexei Stukalov after Ufa defeated Akhmat and Spartak, and after that she took points from CSKA and Zenit.

If the registration in the RPL is retained, is the mentor able to return the team to their previous positions - to the upper half of the table?

- The work of the coaching staff is judged by the results.

In this case, they are.

At the end of the championship it was necessary to score points, and Ufa did it.

Time will tell what will happen next.

- In case of a draw in the match between Ufa and Arsenal, Rotor will need to defeat Rubin away to qualify for the transitional matches.

How likely is it that the teams will decide to play it safe and play for a draw?

- All questions must be resolved on the football field.

Yes, of course, the teams will be aware of the results of the parallel matches.

But you have to rely on yourself and take your glasses.

- In matches where the fate of the clubs in the division is being decided, refereeing will also come to the fore.

Shouldn't the RPL and RFU take it under special control to avoid scandals, and the referee of the meeting to watch all the controversial episodes himself?

- With the arrival of Ashot Khachaturyants, the level of refereeing in the RPL began to grow.

The precedents with the same Mikhail Vilkov indicate that the management began to react harshly to the mistakes of the arbitrators.

I believe that RPL has qualified referees, but VAR should help them in controversial situations.

I would like to believe that in the Ufa - Arsenal match everything will be decided on the football field and in accordance with the rules.