Jonas Andersson on the golden hero: "One of the bigger breakthroughs"

Växjö's third Swedish Championship gold in six years is what SVT's expert Jonas Andersson calls impressive. He highlights 22-year-old Pontus Holmberg as the great gold hero. - When the star players in each team did not deliver, it was Holmberg and the formation that was the difference, Andersson says. 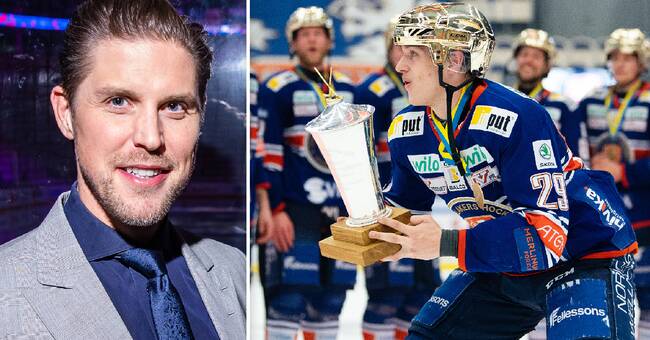 What do you say about Växjö's Swedish Championship gold?

They win every single tight match through the playoffs and play a fantastic defensive game.

The formation with Pontus Holmberg, Fredrik Karlström and Marcus Sylvegård has a huge breakthrough that makes this possible.

"The one who stepped forward"

During the gold celebration, Holmberg received an award as the playoff MVP after seven goals and seven assists in 14 slusp games.

In the final series, there were five goals and an assist for the young player who won both the points and shooting leagues.

- He is the one who stepped forward.

He scores nine goals in the regular season and then goes ahead and scores five in the final series - that says a bit about the breakthrough he has had.

It is one of the major breakthroughs.

Before the final series, I believed in Rögle because they had a wider width, but it turned out to be the opposite.

How do you sum up the final series?

I like attacking hockey and thought the matches between Rögle and Skellefteå were really fun.

I hope that Swedish ice hockey is on its way there and that not everyone thinks that you have to play like Växjö to win.

I think that Rögleishockey, which is a small mix, is very much at the forefront in the long run.

But it was good class, tight and great drama.

Then a final series will never be the same without the fans, it's that simple.

Why did Rögle not win his first final?

- There were too many star players at SHL level who did not really manage to deliver when they met this tight defensive.

They do a great job but are too inefficient.

Had they had one or two goals with them several times and been able to play on it, they would have played out Växjö.

They play better ice hockey when they play as they can.

But it was a bit too deep valleys.