A knee injury stops Regan Magarity from this summer's European Basketball Championships in Spain and France. The 25-year-old forward was to make his second European Championship but is now forced to withdraw. - It is always an honor to play in the national team, not to experience it this summer is very sad, says Regan Magarity to SVT Sport. 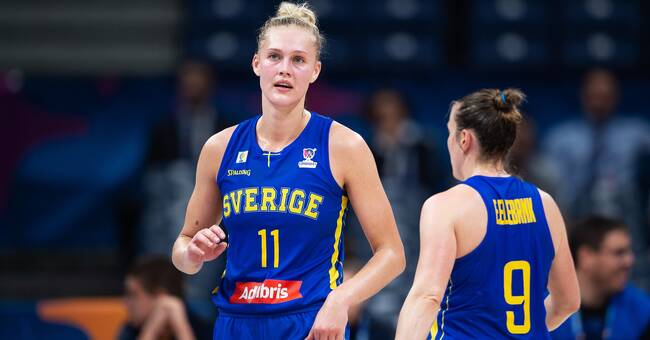 Regan Magarity broke through two years ago when Sweden took sixth place in the European Championships and she has since developed into one of the national team's key players.

During this season, she was the most effective player in the French league.

For a year now, she has struggled with a minor knee injury that worsened during the season.

- I have had problems with my right knee for just over a year now.

During the season, the injury has only gotten worse.

This is something I have to take care of now so that it does not get worse, says Magarity to SVT Sport.

- It is always an honor to play in the national team, not to experience it again this summer is very sad, she says.

Magarity made her championship debut during the European Championships 2019, this summer's finals would have been her second.

- I have played a European Championship before and it was one of the best basketball experiences I have had.

Not being allowed to participate is very sad, but I know that it is a decision I have to make for the sake of my health, says Regan Magarity.

The second star to miss the European Championships

- Another really sad message for the summer, of course.

Regan, who made his first appearance with the national team during the European Championships 2019, has already established himself as a very important part of the group, both on and off the field, says national team manager Fredrik Joulamo in a press release.

It is already clear that Amanda Zahui will miss the European Championships.

Allis Nyström and Amanda Kantzy will be called up to camp before the European Championships.

Nyström is, among other things, the new Swedish champion with Luleå Basket.

ARCHIVE: This is where the basketball heroes land after the Swedish Championship gold - meet with cheers at the airport (April 28)

Here, the ladies of Luleå Basketball are received by a small number of people at the airport in Luleå. Hear how the players have celebrated and what they think about the gold match. Photo: Erica Larsson / SVT