Five years after the first victory: Formula 1 suddenly became a popular sport in the Netherlands

Max Verstappen returns to the circuit on which he wrote motorsport history five years ago at the Grand Prix of Spain in Barcelona this weekend. How Formula 1 became a popular sport in the Netherlands from 15 May 2016. 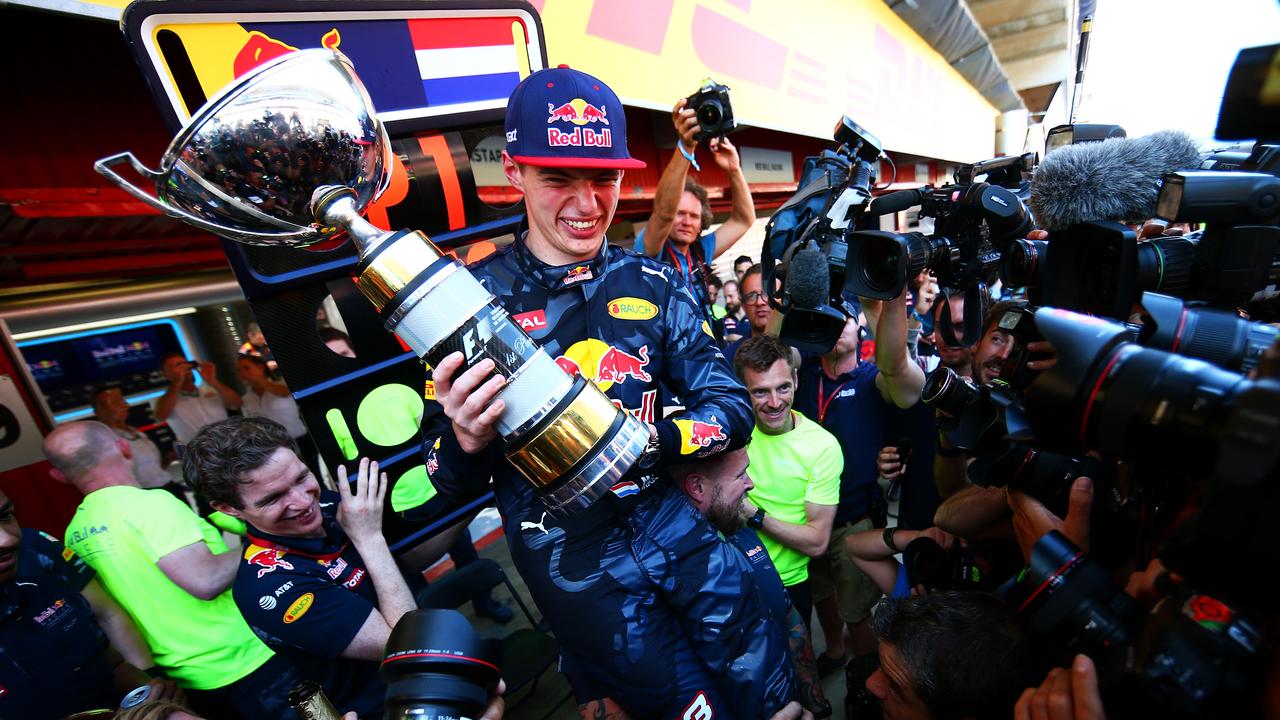 Max Verstappen returns to the circuit on which he wrote motorsport history five years ago at the Grand Prix of Spain in Barcelona this weekend.

How Formula 1 became a popular sport in the Netherlands from 15 May 2016.

It is the Thursday before the Grand Prix of Spain in 2016 when the then eighteen-year-old Verstappen enters the paddock for the first time in Red Bull Racing outfit.

Together with Daniil Kvyat, whose seat Verstappen takes over at Red Bull, he has been the center of attention in the Formula 1 world for a week and a half.

It has only been 23 races since Verstappen made his debut in the premier class of motorsport.

At Toro Rosso he impressed with a number of strong races, characterized by daring overtaking.

"It was already very exciting before the race", Ziggo Sport pit reporter Jack Plooij looks back on that weekend.

Max Verstappen for the first time in Red Bull outfit prior to the Grand Prix of Spain in 2016.

Max Verstappen for the first time in Red Bull outfit prior to the Grand Prix of Spain in 2016.

"Would they have the right tape?"

The 2016 Formula 1 season is dominated by Mercedes, which has two drivers with Lewis Hamilton and Nico Rosberg competing for the title.

Although the year is still young, it is already clear that the competing teams will play a supporting role in most Grands Prix.

When teammates Hamilton and Rosberg knock each other off the track shortly after the start at the Circuit de Barcelona-Catalunya, it is clear that a Formula 1 fairytale can unfold.

Verstappen hoped for a podium place in advance, but suddenly fights for the lead in a Grand Prix in Formula 1.

Meanwhile, Plooij is in the paddock to interview dropouts.

As always, he only gets to participate in the race through the comments of his Ziggo Sport colleague Olav Mol.

"At a certain point you realize that something special is happening," he continues.

"When Max entered Formula 1, we all knew that sooner or later he would win a race. But the fact that we

were going to hear

was very special. I wondered: would they have the right tire? to have?"

The moment when Max Verstappen becomes the youngest Grand Prix winner ever.

The moment when Max Verstappen becomes the youngest Grand Prix winner ever.

Verstappen takes the lead after the pit stops and manages to keep the Ferrari of former world champion Kimi Räikkönen behind him for a long time.

When he crosses the finish line, he is not only the first Dutch Grand Prix winner, but also the youngest winner of all time.

Plooij: "When Max walked into the square (a place where journalists interview the drivers, ed.), All reporters spontaneously started clapping for him and he received a standing ovation. But we have an agreement that he will always be the first to meet us. word stands. He came walking towards me and suddenly everyone was looking at me too. "

"I saw Max grow up in diapers on the tracks and now he had won a race in Formula 1. At the time I had no idea what to do or say and I died a thousand deaths. Did I have to hug him? a kiss or a hand shake? Finally I took the microphone and just said congratulations. "

The victory of Verstappen was watched by 1.1 million people, which at that time was a viewing figure for pay channel Ziggo Sport.

An average of more than 300,000 people watched the debut season of Verstappen in 2015, with peaks at 800,000 when the races were broadcast on the open net at Veronica.

In the 2014 season without Verstappen, an average of 124,000 people watched the Grands Prix.

The Grand Prix of Austria was visited annually by thousands of Dutch fans before the corona pandemic.

The Grand Prix of Austria was visited annually by thousands of Dutch fans before the corona pandemic.

Demand for Formula 1 travel is increasing

Even in the months after Verstappen's victory, interest in Formula 1 remains high, also knows Sportreizen.com, which until then only facilitated football trips.

"We had been toying with the idea of ​​organizing Formula 1 trips for some time and after that victory of Verstappen, the demand only grew", says director Roy Liebrand.

"So we started with that the following year. There are die-hard fans who go to the circuit purely for the races, but there is also a lot of demand from the slightly smaller fans who want to visit a Grand Prix. People who visit a Grand Prix. -want to combine a visit with a short holiday or city trip. "

A 'Verstappen effect' could also be seen at the go-kart tracks of Bleekemolen Race Planet.

"We just came out of the recession when Max started driving and from there we saw the interest in karting increase", says former Formula 1 driver Michael Bleekemolen, together with his sons Jeroen and Sebastiaan the founder of Race Planet.

"We have seen that interest grow since Max won his first Grand Prix. Often it is fathers who rent the track for a so-called family heat and explain to their children of about thirteen or fourteen how to ride. We have the new Max what that concerns often passing by. "

Verstappen is fighting for world title with Hamilton this year.

Verstappen is fighting for world title with Hamilton this year.

Interest in F1 became even greater in years after Verstappen's victory

According to Plooij, the increase in the popularity of Formula 1 is not only due to Verstappen.

"I think you are doing Olav Mol very badly when you say that the great popularity of Formula 1 in the Netherlands is only due to Max", says Plooij about his fellow commentator, who has been reporting at the Grands Prix since 1991.

"Olav has built Formula 1 in the Netherlands from scratch and many people have grown up with him. In his comments he also tries to serve the new fans. It is not without reason that he 'the red Ferrari' once or twice a weekend. That is meant for that one lady or gentleman on the bench who is watching Formula 1 for the first time, "said Plooij.

Interest in Formula 1 has only grown in the seasons after Verstappen's first victory.

With the Red Bull driver finally looking to compete for the title with Lewis Hamilton this year, interest in the premier class of motorsport is on the rise again.

For example, no less than 2.8 million people at Ziggo Sport saw how Verstappen was beaten by Hamilton in Bahrain in the first race of this year.

"Bookings are starting to pour in again and there is a lot of demand for the Grands Prix. The Dutch fans cannot wait to visit the Grands Prix again."

Qualifying for the Grand Prix of Spain starts on Saturday at 3 p.m.

The race starts on Sunday at the same time.

See also: Five questions about GP Spain: 'Circuits where Red Bull is really fast are yet to come'