Ouissem Belgacem evokes homophobia in pro football: "Suffering was my only option"

Guest Wednesday morning of Europe 1, the former football player Ouissem Belgacem publishes Adieu ma shame, autobiographical story in which he evokes the difficulty for a homosexual to assume and evolve in the world of professional football . According to him, nothing is done to fight homophobia which plagues the whole institution. 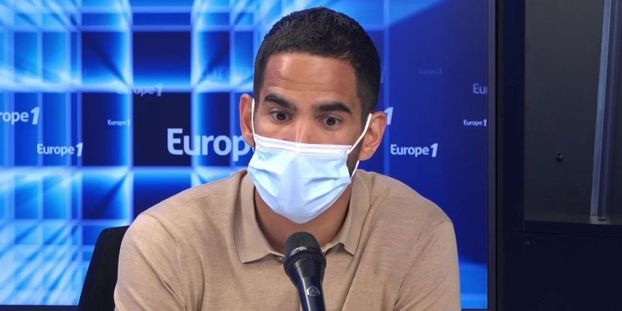 Guest Wednesday morning of Europe 1, the former football player Ouissem Belgacem publishes Adieu ma shame, autobiographical story in which he evokes the difficulty for a homosexual to assume and evolve in the world of professional football.

According to him, nothing is done to fight homophobia which plagues the whole institution.

His testimony is all the more moving as it is rare. In

, published by Fayard, the former footballer Ouissem Belgacem looks back on his journey as a young homosexual confronted with prejudice and violence, first during his childhood in difficult neighborhoods, but especially in a training center, which he integrated at 13 years old. If coming-out remains rare among professional athletes, they are almost non-existent in the world of football, a sport in which the cult of masculinity and financial issues leave no room for difference, according to the former. player, who was invited to the morning of Europe 1 on Wednesday.

Ouissem Belgacem will have waited years before assuming his sexuality.

First because of his social origins, those of a practicing Muslim who grew up in the suburbs: "The society in which I grew up, my background, my environment wanted to make me a shameful and unhappy homo", explains he does.

And even more so when he wanted to embark on a professional sports career, joining the Toulouse Football Club training center in the early 2000s.

“When I was a teenager in a training center, I didn't necessarily have the psychological weapons to be ready to face criticism. Because it could not have happened in gentleness and benevolence. Suffering was my only option at the time. "

Main showcase of this homophobia in football: these supporters' banners where insults are displayed in capital letters, and which regularly hit the headlines.

"We must not trivialize homophobic insults. I often hear fans saying to me 'I say dirty queer as I would say dirty idiot'. But for me, that does not make things happen", explains Ouissem Belgacem.

… The tree that hides the forest

But according to him, these stadium phenomena also echo a deeply rooted homophobia, in the very hierarchy of professional football, from the locker rooms to the highest authorities and against which no sanction or prevention measures are taken. "No, things are not moving forward. No, things are not getting better. We still have no coming out in France and I do not hear a lot of inclusive speeches," said the former player. "I see a few snippets of initiatives, rainbow armbands and the like, but for me, it has absolutely no effect. There is still a lot to do in terms of education, not only that of young people, but also with the staffs, coaches, club presidents. "

Find the Tête-à-tête every day at 7.40 am on Europe 1 as well as in replay and podcast here

His story denounces the cult of virility organized by supervisors and sponsors around pro players, which eclipses all possible otherness, which ends up generating profound phenomena of rejection.

Thus, to fit the mold, forge a shell and escape locker room gossip, Ouissem Belgacem admits to having himself given in to homophobia, sometimes in the most violent way possible.

"Take to the streets and hit someone just for who they are ... I sadly took part in this kind of practice at a time of my life when I was really lost," he admits. .

“Taking part in these angi-gay brigades was an ultimate blanket that erased all suspicion,” he explains.

"Back then, homosexuals on the streets were the physical manifestation of the problems I had in my head. And it was also a way of fighting against myself. It's unforgivable, inexcusable…"

Beyond behavior, Ouissem Belgacem believes that the pressure of money also contributes to maintaining a certain omerta. "Footballers represent such financial stakes ... For a team to perform well, it must be stable. And a footballer who comes out, de facto, will disrupt the locker room a bit. And that, I am sure that the coaches or the presidents of clubs are not going to want it because if a team plays the title, the rise or tries to maintain itself, it needs all its weapons ", he explains. .

According to him, the weight of secrecy ends up having an impact on the performance of the athletes concerned. He himself ended up leaving training on the threshold of his 20 years. "In high level sport, when you want to break through, you have to have technical, athletic, physical qualities, etc. But it is above all a mental achievement. And I was so obsessed with homophobia, the fact to change my sexuality, that it took me a profusion of energy that I did not put in my training, in my matches, in my rest times, "he laments. "Footballistically, I was not able to develop like the others. It was not possible."