Zenit's championship, Tambov's departure to the FNL and the referee scandal in Volgograd: the main events of the 28th round of the RPL

Zenit defeated Lokomotiv and became the Russian football champion for the third time in a row. Spartak won a tough victory over Arsenal on the road and overtook the railroad workers in the fight for second place. Tambov lost to Rostov in a foreign field and lost their last chances to maintain their registration in the Premier League. And the confrontation between "Rotor" and "Akhmat" ended in a loud scandal of referees. About the main events of the 28th round of the RPL - in the material RT. 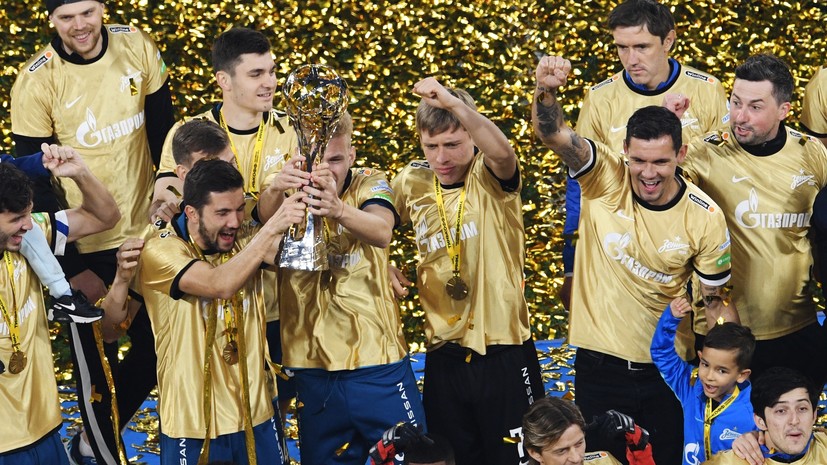 Outsider "Rotor" scored the most important three points in the home confrontation with "Akhmat" - 1: 0.

Along the way, the Volgograd team interrupted two unpleasant series at once: over the course of seven matches, they not only could not win, but did not score a single goal.

The only goal in the middle of the first half was scored by the Kazakh newcomer Alexey Shchetkin.

Grozny did not manage to hit the gates of Josip Chondrich, who made eight saves.

Horvath repeatedly rescued his team, but his salvation at the beginning of the second half was especially remembered, when he first pulled the ball out of the top nine after a free kick, and then coped with the finishing move.

And already in the time added by the referee in the episode with a long-range shot, Evgeny Kharina helped the owners out of the crossbar.

A few minutes before that, with the participation of the Grozny midfielder, a rather controversial episode took place in the penalty area of ​​Rotor.

It seemed that Solomon Kverkvelia, trying not to let the opponent to the ball, knocked him down, but the referee Stanislav Vasiliev did not appoint a penalty.

The referees in the Chechen Republic were very unhappy with this decision.

The general director of the club, Akhmed Aydamirov, recalled that the judges made the second gross mistake against the team in ten days, and announced their desire to apply to the ESC RFU.

“Their silence influenced the result of our Russian Cup semifinal match with Krylia Sovetov.

ESC RFU admitted the mistake of the referee, who did not remove the opponent's goalkeeper for depriving him of an obvious opportunity to score.

Today VAR “swallowed” the moment with a violation of the rules on Kharina in the penalty area.

An obvious penalty, which was seen by everyone except the judges and VAR, "- quotes the words of the" Championship "functionary.

24 shots of "Dynamo" on goal Dupin

A home victory was also won by Rubin, who is fighting for getting into the European cups. Moreover, the Kazan team beat their direct rival Dynamo - 2: 0. The blue and white had an advantage for most of the match, struck 24 shots on the opponent's goal, ten of which were on target, but did not manage to break through Yuri Dyupin. Plus, from the 52nd minute, they acted in the majority after Ilya Samoshnikov received a direct red card for a rough tackle in the feet of an opponent. By the way, this removal became the eighth for the hosts in the current RPL draw, and according to this indicator they occupy the first place in the league.

Kazan realized all those few chances that they created - both of their shots on target were effective.

At the beginning of the meeting, Djordje Despotovic scored his 12th goal of the season.

And closer to the final whistle, Hwang In Böm took advantage of the gross mistake of substitute Roman Neustädter.

So Sandro Schwartz's wards suffered their third defeat in the last five matches in all tournaments and once again played unsuccessfully against Rubin.

In 38 matches with Kazan, Dynamo have only four wins.

CSKA at home broke up with the outsider "Ufa" - 1: 1 and extended the losing streak in all competitions to four matches.

In addition, the Muscovites were left without their leader Nikola Vlasic, who was injured at the very end of the first half and the field never returned.

Moreover, the Bashkortostanians turned out to be close to the first victory in the history of confrontation with an opponent.

In the middle of the second half of the meeting, the guests were brought forward by Philip Mrzlyak, who scored three goals in the last four games in the RPL.

However, a few minutes later, the red-blue was saved from defeat by Fedor Chalov, who came on as a substitute.

The striker scored his first goal since December last year.

In the end, CSKA almost earned a penalty.

Dzhemal Tabidze knocked down Konstantin Kuchaev in his own penalty area, but the referee Vasily Kazartsev did not point out the point.

This helped Ufa earn the most important point in the fight for survival.

Under the leadership of the new head coach Alexei Stukalov, the outsider won two victories with one draw and one defeat in four RPL meetings.

As a result, not only Rubin, but also Sochi took advantage of the army team's misfire.

Both teams bypassed CSKA in the fight for a ticket to European competition.

The main hero of the confrontation was Christian Noboa, who took the double.

At the beginning of the match, the 36-year-old Ecuadorian converted a penalty in the third RPL meeting in a row.

Earlier, he hit the gates of CSKA and Ufa from a point, and the southerners also won victories in these meetings.

All in all, the veteran has six goals from the penalty spot in the current draw of the national championship - more than anyone else.

The midfielder scored six more from the field.

And the author of the decisive goal was Anton Zabolotny.

In his 50th jubilee game for Sochi, he updated his personal scoring record in the Premier League (9).

At the same time, "Krasnodar" by this time due to the removal was left without Remy Cabell.

In the minority, the team extended their unbeaten streak at home to five meetings in the national championship.

This is a new club anti-record.

Khimki's leadership in the last 15 matches

They could well have competed for a ticket to the League of Conferences and Khimki, if not for the disastrous start of the season.

But with the arrival of Igor Cherevchenko, the team began to gain points in a truly championship schedule.

So, if we take the last 15 matches, then the Moscow Region team in this segment is in the lead with 35 points.

In addition, in a meeting with Ural, he won his eighth home win in a row in the RPL.

The only goal in the tenth minute after a corner kick was scored by Mohamed Konate.

True, soon the owners were left in the minority.

Vladimir Moskalev, having watched the replay, showed a straight red card to Alexander Troshechkin for a rough tackle at the feet of Ramazan Gadzhimuradov.

But, even with a numerical superiority, the Yekaterinburg team was never able to hit the gate of Ilya Lantratov.

The goalkeeper made as many as 11 saves and spent the tenth match with zero in the current season of the Russian championship.

Now, according to this indicator, he is on a par with Anton Shunin and is second only to Marinato Guilherme (12) and Sergei Pesyakov (11).

Ninth defeat for Tambov in a row

Meanwhile, the first team to leave the Premier League at the end of the season was determined.

She was expected to be "Tambov".

In the match against Rostov, Sergey Pervushin's wards suffered the ninth defeat in a row in the RPL and the tenth in 2021 in all tournaments.

At the same time, in the reporting meeting, the outsider looked quite decent and, although he was inferior to his opponent in possession of the ball, he found the opportunity to respond to the moments of the yellow-blue with his approaches.

But in the end, Valery Karpin's team still hit the opponent who was inferior in the class.

And then Kento Hashimoto scored the sixth goal in the championship and put an end to the confrontation.

Also in the 28th round, the gold race ended.

Zenit defeated Lokomotiv at home (6: 1) and became the champion of the country for the third time in a row.

In turn, the railroad workers suffered the biggest defeat in the history of the Russian championships.

Petersburgers scored six goals in the second match of the national championship in a row (Rotor suffered a week ago) and with 71 goals broke the RPL performance record (67) set by CSKA in the 2014/15 season.

19 of them were chalked up by Serdar Azmun.

In the game against Loko, he scored the second hat-trick of the current RPL season and consolidated his leadership in the tournament's top scorers race.

Along the way, the Iranian surpassed the achievement of Alexander Kerzhakov, who scored 18 goals in the 2004 Russian Championship season.

True, in the 2010/11 tournament, the ex-striker of the Russian national team scored 23 times, but in that transitional season the teams had 44 meetings.

Artyom Dzyuba scored twice and stopped one step away from the coveted “200 goals per career” mark.

And an assist to Malcolm helped him to break into first place in the current national championship in terms of the number of points for performance (16 + 6).

On Monday, Spartak managed to take advantage of the competitor's misfire, which beat the outsider Arsenal 1: 2 on the road.

Goals in the red-and-white squad were scored by Alexander Sobolev and Jordan Larsson.

The first scored the eighth goal in eight RPL matches after the season resumed.

On average, in 2021, he hits other people's goals every 69 minutes, and this is the best indicator in the league in this segment for players who have scored more than five times.

In total, the Russian national team player has 13 goals in the RPL.

And only Larsson has more in Spartak - 14.

And at once two assists were given by Victor Moses, who in 16 previous meetings of the Russian championship never assisted partners.

He hit his own goal and became the author of the third own goal of the red and white in the current RPL season.

This is the worst indicator of the tournament.

In the two previous cases Pavel Maslov wrote down the "crossbows" as a liability.