"Takeaway Boxing King" was shortlisted for Lawrence, why did he persevere in poverty?

The Lawrence Award is also known as the Oscar in sports. The list of winners every year is written with the best and most popular names in the world's sports arena. This year, a Chinese boxer was nominated for Lawrence Sports Moment. Zhang Fangyong (right) in the game. Photo by China News Agency reporter Liu Ranyang   Many people are not familiar with his name. The title of "Takeaway Boxing Ch 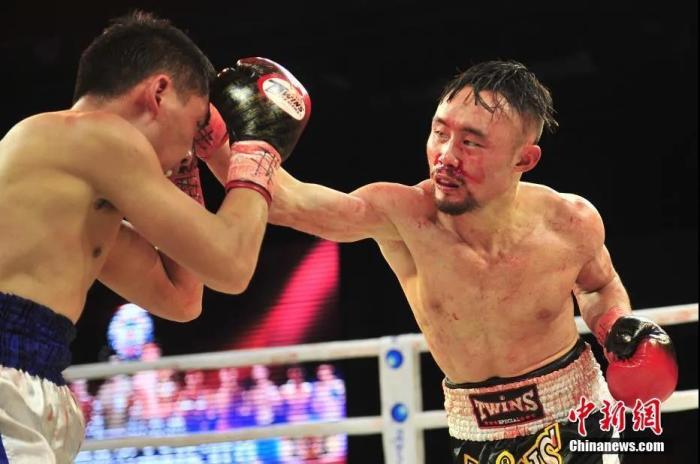 The Lawrence Award is also known as the Oscar in sports.

The list of winners every year is written with the best and most popular names in the world's sports arena.

This year, a Chinese boxer was nominated for Lawrence Sports Moment.

Zhang Fangyong (right) in the game.

Many people are not familiar with his name. The title of "Takeaway Boxing Champion" may be more well-known, but there is still a big gap between him and those big sportsmen.

He does not fight full-time, and he has to worry about his livelihood.

But it is such a boxer who has won the favor of Lawrence.

On the day of receiving the email from the Lawrence Organizing Committee, the weather in Beijing was not very good.

Zhang Fangyong squeezed the bus from his residence in Fengtai District to the city center.

The M23 boxing gym where he trained is in Dongcheng District.

"At that time, I immediately thought it was unrealistic. Lawrence everyone knew that it was the Oscar in the sports world!" Recalling the scene at that time, Zhang Fangyong's tone was still excited.

After getting out of the car and on the pedestrian sidewalk, Zhang Fangyong resisted the urge to scream loudly and quickly contacted the team.

"I said Lawrence found me, is it true or not?"

The email Zhang Fangyong received at that time was an official notification from Lawrence, and the finalists have not yet been finalized.

Before receiving the email, Zhang Fangyong had never thought about the connection between the Lawrence Award and himself, even though he could count Yao Ming and Liu Xiang both won.

"These athletes have won many world championships since they were teenagers. But athletes like me, there are too many in the world..."

This is the fourth year after Zhang Fangyong won the WBA Bantamweight Youth Golden Belt. The title of "Takeaway Boxing Champion" has been known by many people through the media, but he still has to run for a living after training.

As a result of the epidemic in 2020, when there is no competition, there are more and more people delivering food, and the food delivery industry has also begun to "involve."

Zhang Fangyong started to teach boxing classes. Some of the clients were acquaintances, and he was a little embarrassed to charge.

The income of teaching is similar to that of delivering food, but it is not always in class. "It is not like delivering food, as long as you are willing to deliver it every day." Zhang Fangyong said.

Originally, Zhang Fangyong would also ride a motorcycle to the boxing gym, but his previous experience of delivering food in the wind and rain left him with serious rheumatism roots, and he would feel better if he took the bus.

"Lawrence sent me this message. At the time, I felt that whether or not I can be nominated, the past ten years are indeed worthwhile." Zhang Fangyong said.

Zhang Fangyong's dream of champions really goes back more than ten years ago.

In 1993, Zhang Fangyong was born in a small mountain village in Yunyang, Chongqing.

When he was young, the family's economic conditions were not good, his parents went out to work, and he and his brother became left-behind children.

Taking a stick "dancing swords and guns" is their daily pastime.

On the evening of August 8, 2008, the opening ceremony of the Beijing Olympic Games was grandly opened at the National Stadium ("Bird's Nest").

After graduating from elementary school, Zhang Fangyong dropped out of school.

Yunyang has the title of "Hometown of Noodle Workers" in China. He followed his parents around making noodles and serving them to restaurants and night markets.

Up to this point, Zhang Fangyong and boxing had basically nothing to do.

The 2008 Beijing Olympics is a sporting event that the world pays attention to.

"Everyone is discussing this topic, who won the Olympic champion today, and China's medal count is the first. They all feel that the moment they receive the award is particularly important and very honorable." Zhang Fangyong said.

A 15-year-old boy who has not had any professional sports training started his dream pursuit in the summer of that year, and he pursued it for more than ten years.

Zhang Fangyong returned to his hometown and continued to attend junior high school. Soon after, he waited at school for the selection of talents for the Olympics.

He first practiced wrestling for a short period of time. In 2009, Zhang Fangyong began to practice boxing.

Zhang Fangyong is in the game.

Unlike professional boxing teams or those signed boxers, Zhang Fangyong has no results except for a good physique, and no one will provide him with logistical support.

He can only find a way to make a living while taking time to practice boxing.

He traveled to Xi'an, Kunming, and Beijing, "delivered takeaways, carried flour, set up stalls, helped people move homes, and did some work on construction sites."

Zhang Fangyong said that the delivery time is relatively long, starting in the second half of 2015.

"We need to run stairs frequently. For us athletes, running stairs is a small problem."

At the beginning of the delivery, the raincoats and uniforms were not fully equipped. "It happened to be raining in Kunming for two years. Every day from morning to night, the clothes were soaked with water."

Another difficulty is that electric cars are often stolen. "When you get to a place, you have to get down and lock the car immediately, and then run desperately." Zhang Fangyong said.

When he first started boxing, there was basically no chance to compete, and Zhang Fangyong sometimes only played once a year.

Delivering food has become his main business, and his income has also improved.

But this is not what he wanted, "I didn't go to Kunming to deliver food, so I switched to a part-time job and had to train well."

Although there is still a long way from the world boxing champion gold belt, for him, at least one step closer to his dream.

Zhang Fangyong and his golden belt.

In Zhang Fangyong's hometown, Yunyang, there have also been more famous athletes, such as Wu Jian, the women's weightlifting champion of the Greek Universiade.

As a young Zhang Fangyong, he once faced the wall and imagined himself becoming a world champion.

After getting the golden belt, Zhang Fangyong happened to meet Wu Jian, who had retired from the military and worked in the county when he returned to his hometown.

When talking about this past event, a teacher next to him joked that you can now post your deeds on the wall.

At that time, many people persuaded Zhang Fangyong to get his results and he should work steadily and stop punching.

But for Zhang Fangyong, he always felt that his boxing career should not be limited to this.

In 2019, after several fights, Zhang Fangyong joined the M23 team. Later, Xu Can, the only current world boxing champion in China, appeared here.

Although Zhang Fangyong, who is one year older than Xu Can, is still far from the world boxing champion, he clearly feels his technological progress, which is also one of his motivations to persevere.

Zhang Fangyong after the game.

In Chongqing, Xi'an, Kunming, and Beijing, Zhang Fangyong was bumped all the way, and his girlfriend who had been in love with him for many years also accompanied him all the way.

Zhang Fangyong said that they don't have a stable income yet, and they may consider getting married if they don't fight punches in the future.

He said that compared with 2008, his mentality has matured a lot.