"Gross interference in the gameplay": the Russian flag was taken away from the table during the World Drafts Championship among women

In Warsaw, during the match for the title of world champion in drafts with the participation of Tamara Tansykkuzhina, the Russian flag was removed from the table. The episode took place directly during the fight, which later ended in the victory of the Polish woman Natalia Sadovskaya. The World Drafts Federation RT said that the actions of the organizers were a gross violation of the regulations, committed under pressure from the World Anti-Doping Agency. 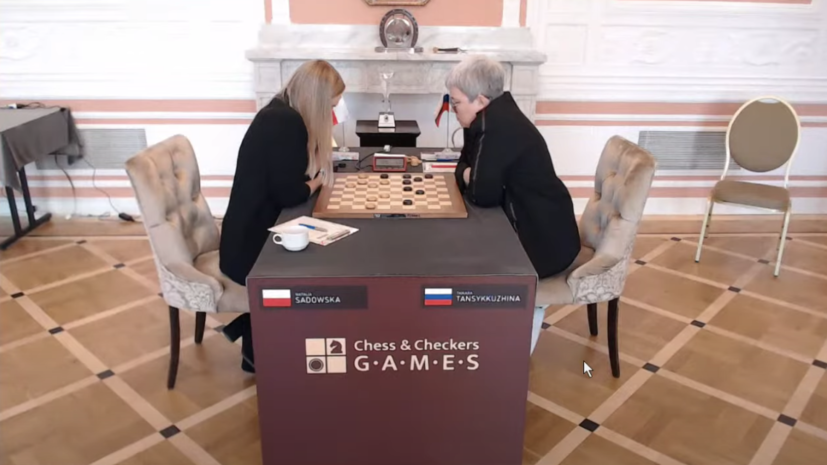 "They called and asked to remove the Russian flag"

The World Drafts Championship among women taking place these days in Warsaw was overshadowed by a scandalous episode.

During a meeting between Russian Tamara Tansykkuzhina and Polish Natalia Sadovskaya, one of the organizers took the Russian flag off the playing table.

The match between the reigning world champion Tansykkuzhina and the contender for the world crown Sadovskaya started in Poland on April 23.

On the 27th, the athletes played the fourth game, in which the Russian woman played with white checkers.

Right during the game, the former president of the European Drafts Federation Jacek Pawlicki came up to the table from the side of Tansykkuzhina.

Pavlichky's actions surprised Tansykkuzhina, and for a few more seconds she looked around in bewilderment, after which she again focused on the game and began to wait for her opponent's move.

After some time, Pavlitsky explained his actions.

He stated that he was following the order of the President of the World Anti-Doping Agency (WADA) Vitold Banka.

He noted that in this way he wanted to prevent possible sanctions against FMJD.

“I got a call on behalf of the former Minister of Sports Vitold Banka and asked to remove the Russian flag from the table, despite the fact that the game was going on.

I didn't know how Tamara would react, but I had to do it.

The Polish side did nothing wrong.

Moreover, we have done more than we should.

FMJD ignored the decisions made in December regarding Russia, and if we do not immediately change anything, FMJD will be excluded from WADA, ”Pavlitsky told the Championship.

It should be noted that all the previous days, Russian and Polish flags were on the table.

Tricolor was also present at the previews of the broadcasts of the games and in their schedule, but from the fourth round, Tansykkuzhina's surname began to be accompanied by symbols in neutral gray and white colors.

In the official regulations, she is designated as "neutral athlete".

The fourth meeting ended in the defeat of Tansykkuzhina in the classical game.

According to the rules of the world championship, for this Sadovskaya was awarded 12 points.

Earlier, the Russian woman lost in the first round in a game of quick checkers, and brought the next two rounds to a draw.

At the moment, the Russian drafts player is inferior with a score of 16:32.

There are still five games ahead, but the match meeting will end ahead of schedule if one of the athletes scores more than 54 points.

"Direct violation of the regulations"

The situation around Tamara Tansykkuzhina and the Russian flag for RT was commented on by the FMJD Secretary General and Vice President of the Russian Drafts Federation Yuri Chertok.

He stated that Pavlitsky had no right to interfere in the course of the fight and appear next to the gambling table.

Chertok also noted that the FMJD did not want to comply with the WADA requirements, since the Russian doping scandal has nothing to do with them.

- How would you comment on the episode that took place in the fourth installment?

- This is a direct violation of the regulations.

He was totally against it.

Everyone supports the assessment that it was a gross interference in the gameplay.

- It was evident that Tansykkuzhina was confused after the disappearance of the flag and looked around for several seconds.

As a result, she lost the classic game, giving her opponent 12 points.

Did this episode affect her strongly?

- She wasted a lot of time.

Although we expected this, but, naturally, not during the game.

This could be done before the game, and after, at any time.

The fact that the flag was removed during the game unsettled Tamara Mikhailovna.

I myself watched the match and did not immediately understand what had happened, I was just distracted at that moment.

I thought that she was sitting for so long and not making obvious moves, what she was thinking about.

I even swore to myself.

Then they just called me and told me what had happened.

- Who accompanies Tansykkuzhina in Warsaw?

- She is there with only one coach, ten-time world champion Alexei Chizhov.

He takes her second.

There was no way to protect the athlete; no one was allowed to enter the playing area.

- In the previous days, the Russian flag was present on the table.

Why was it removed in the end?

- Between us, the World Drafts Federation, and WADA, negotiations were going on, quite tough.

This doping scandal has absolutely nothing to do with us.

Firstly, the very use of doping in checkers is very doubtful.

Secondly, all our doping tests go directly to WADA, bypassing the Russian Anti-Doping Agency (RUSADA), and there were no complaints against us.

There was even a question of withdrawing from the agreement with WADA, but still the FMJD Council decided to comply with the requirements.

WADA pressed for the flag to be absent at this World Championship?

- Only on April 23, when the match had already begun, they sent us an ultimatum.

In general, the competitions were supposed to take place back in 2020, they were postponed due to the pandemic.

It turns out that he is not subject to sanctions at all.

But we must not forget about one more piquant moment: the head of WADA is Pole Witold Banka.

During the match, someone from the Polish Ministry of Sports put pressure on the organizers to immediately remove the flag, otherwise FMJD would fly out of WADA.

It didn't scare us much, but the organizers were scared for the world federation.

Here the fault lies with the too quick organizer.

- You contacted Tansykkuzhina, is she worried?

She lost because of a stupid mistake.

She beats two checkers and does not see that you can beat three.

This is a very rare moment, this may not be the case in your entire career.

- Isn't everything lost for her in this match?

- It all depends on her, there are still five parties.