Hampus Finndell, 20, scored his first Allsvenskan goal when Djurgården extended their winning streak. Won 3-1 away against Varberg. - It was tough, whiny and difficult to play. We are very happy, says Nicklas Bärkroth to Discovery +. 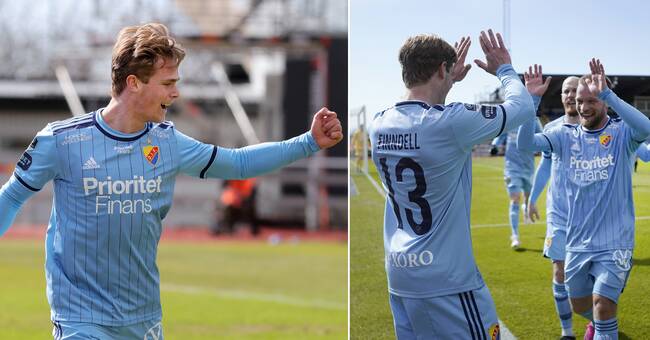 Before the away meeting with Varberg, the Stockholm team had two victories in two matches.

Today, the victory suite would be expanded.

Initially, not much was created.

The most dangerous goal chance came in the 16th minute.

That was when Varberg got a shot that went straight at Djurgården's goalkeeper Aleksandr Vasiutin.

But in the 19th minute, Hampus Finndell, who made his Allsvenskan debut in the last meeting with Norrköping, would score his first Allsvenskan goal.

- I just tried to get it on target and succeeded, says Finndell to Discovery + at half time.

Ten minutes later, Varberg player Simon Adjei got the ball on his arm and the away team was awarded a penalty.

A penalty that Aslak Fonn Witry put late in the middle of the goal.

However, the home team would get an important reduction at the end of the first half.

Oliver Stanisic scored his first Allsvenskan goal when he poked the ball into a second ball to 1-2.

In the second half, Nicklas Bärkroth, with a cool lob, would put an end to the match.

The match ended with a 3-1 victory for Djurgården.

- Incredibly nice to stand here with three points, it was tough, whiny and difficult to play.

We are very happy, says Bärkroth to Discovery +.