Tiger Woods has published his first photograph on Friday night since the car accident he suffered two months ago. An image in which he appears smiling and with ... 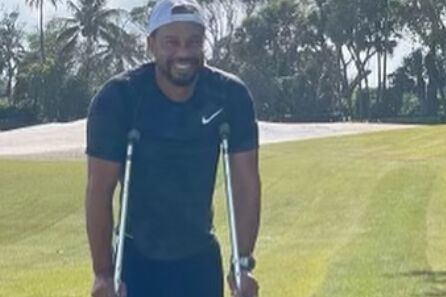 has published his first photograph on Friday night since the car accident he suffered two months ago.

An image in which he appears smiling and with a cast on the lower part of his right leg.

In the image, published on his Instagram account, the American golfer poses with his dog at his driving range in Jupiter, Florida.

"My field is going faster than I am. But it's nice to have a faithful rehab partner, man's best friend," writes Woods, 45.

Winner of 15 Grand Slam tournaments, Tiger's career on the PGA circuit has been in doubt since

the morning of February 23 he crashed with his vehicle

on a winding road outside Los Angeles, California.

The golfer had to undergo emergency surgery for serious injuries to his right leg and since then he had limited himself to issuing several medical statements and written messages through his Twitter account.

Woods has not released

any information about his expected recovery period

or the impact of the injuries on his career.

The police investigation of the accident determined that Woods was driving almost twice the speed limit when his SUV spun out of control, rolled several times and hit a tree.

Woods was hospitalized for weeks before returning home to Florida last month.