Three decades of the 'Libreta Campeones', the pension for athletes from Barcelona 92, how many have already received it?

Former players Alfonso Pérez (Getafe, 1972) and Kiko Narváez (Jerez de la Frontera, 1972) are the only members of the Spanish soccer team that won gold in ... 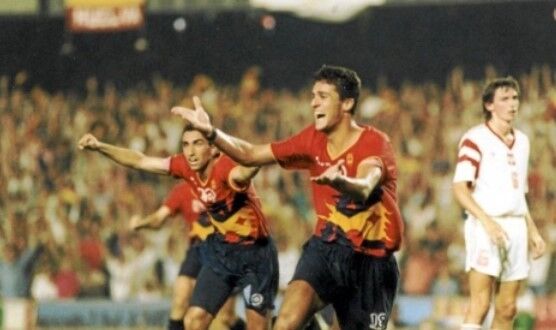 (Jerez de la Frontera, 1972) are the only members of the Spanish soccer team that won gold at the 1992 Barcelona Olympic Games who have not yet received their pension. that La Caixa promised the medalist athletes when they turned 50 years old.

The other 18 members have already overcome the barrier of half a century of life and have received the pension of the so-called 'Libreta Campeones', which ranges from 30,000 to 600,000 euros out of a total of

50 million euros that the bank

is dedicating to the main Spanish athletes of Barcelona 92, who can choose between the collection in a single payment and the lifetime remuneration.

"I have yet to collect that book. Being the youngest of all those in that team, I will be the last to do so," says Alfonso, who made an attacking partner with Kiko during those Games

. "I still have the notebook

. Apart from collecting the money I will keep it as a souvenir," he adds. The former Getafe-born footballer, who played the competition when he was only 19 years old,

scored one of Spain's goals in those Games

and played five of the six games (he was sanctioned against Ghana), including the final against Poland at the Camp Nou. Specifically, they beat the Qatar team in the third game of the group stage, played at the Luis Casanova in Valencia.

"I consider that that gold medal is the most important success of my soccer career. And that I have won a League and two King's Cups, but winning an Olympic gold medal is something that can hardly be repeated, a single soccer player he has the opportunity to win it once in his life, "Alfonso says.

La Caixa delivered 676 'Libreta Campeones', a project promoted in 1988 with the collaboration of the Spanish Olympic Committee (COE), among the Spanish athletes of Barcelona 92 ​​and, according to sources from CaixaBank (the current name of the bank),

" 82% of athletes have already collected them "

after having passed half a century of life.

"Among the necessary conditions to access the 'Champions Book' was the achievement of absolute records (national, European or world), medals in international championships, and obtaining a medal or fourth and fifth place in the Barcelona Olympic Games 92 ", report those responsible for the bank.

recognize the daily effort of athletes

collaborating in their economic security at the time of retirement, in most cases not guaranteed by their sporting activity" and "to encourage, encourage and contribute to the success of Spanish sport between the Olympic Games in Seoul 88 and Barcelona 92 ​​".

The bank considers that the first objective "is being achieved in terms of the number of athletes who are already enjoying these benefits after their retirement as professional athletes" and that "this initiative became the most important private project in the history of sport. Spanish".

Those responsible also believe that the second objective is being achieved: "

, together with the creation of the ADO plan, in which CaixaBank was also an essential actor, have led Spanish sports to a new position on the scene international as a sports power of reference ".

It is a fact that the Barcelona Olympic Games represented a turning point for Spanish sport, which since then at the Olympic level increased the number of athletes and medalists in a very notorious way.

, especially those of modalities in which their protagonists do not have many resources to qualify for a medal and that, if they get it, it does not help them to obtain the same economic resources as the footballers. Surely it will be very good for them to have this retirement plan ", considers Alfonso.

The former striker for Real Madrid, Barcelona, ​​Betis, Olympique de Marseille and the Spanish team will turn 50 on September 26, 2022.