Star factor: how Shalunov and Okulov helped CSKA defeat Avangard in the third match of the Gagarin Cup final

CSKA Moscow defeated Avangarl Omsk in the third match of the Gagarin Cup final. Igor Nikitin's wards prevailed with a score of 2: 1, and the main characters of the meeting were Maxim Shalunov and Konstantin Okulov, who chalked up a goal and an assist. The first strengthened its status as the best sniper in the playoffs, and the second caught up with Sergei Tolchinsky in the scorers' race. For the owners, Reed Boucher became the author of the only scored puck. 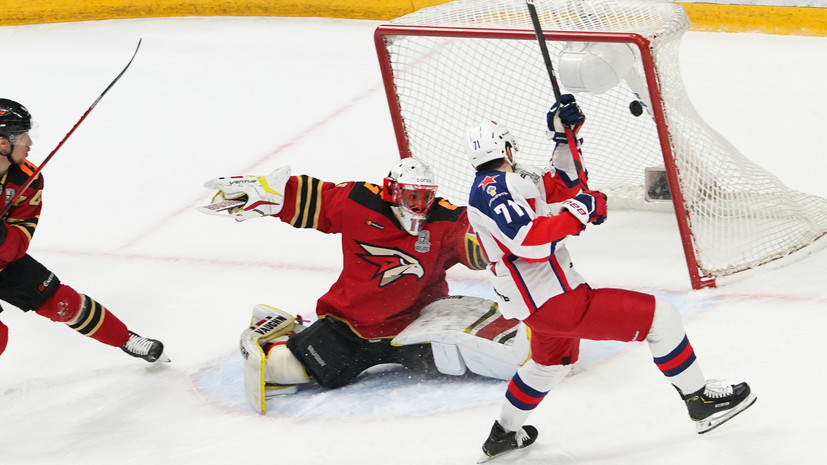 The third meeting of the Gagarin Cup final series could become, if not decisive in the struggle for the trophy, then at least help to more accurately assess the teams' chances of success. The result of the second, and so gave reason to think that the successful start of Avangard was nothing more than a coincidence, and the second successive triumph of CSKA actually confirmed this hypothesis. In turn, the victory of the hosts twisted the intrigue even more and interrupted the Omsk team's unsuccessful streak on their ice. In the confrontation with Ak Bars, Bob Hartley's charges never took the upper hand in the arena in Balashikha.

The fact that one of the best scorers of the playoffs as an opponent did not go to the first match in Balashikha should have become a help to the “hawks”. Maxim Mamin was injured during the second meeting and was left out of the application for the third. Thus, the most productive CSKA link in the current Gagarin Cup with Maxim Shalunov and Konstantin Okulov, who scored 44 (21 + 23) points in total, fell apart. As a result, the place of the injured hockey player was taken by the legend and record holder of Avangard in terms of points Alexander Popov, and the team also included forward Yegor Afanasyev and defender Marsel Ibragimov. Nikita Soshnikov and John Gilmore were in reserve again.

In the first minutes of the match it might have seemed that CSKA hockey players were playing at home, not Avangard. Igor Nikitin's charges looked more active and in the first four minutes did not allow the rivals to disturb the goalkeeper Lars Johansson even once. They themselves regularly provided the opportunity to prove themselves to Shimon Grubets and had a number of good opportunities to open an account. And this is taking into account the fact that the puck reached the goalkeeper only fifty percent of the time. The Omsk people justified the knowledge of some of the playoff leaders in terms of the number of blocked shots and repeatedly prevented them from hitting their own goal.

However, closer to the middle of the period, the initiative passed to the owners. At first, they caught up with the guests in the number of hits on target, and then completely forced Johansson to surrender. Korban Knight turned out to be undisguised on a nickle and tried to literally push the puck past the Swedish goalkeeper, but he sprawled on the ice and blocked her path. Fortunately for the owners, he failed to fix the projectile. The Canadian striker took his bearings and skated a pass to Reed Bush. He scored the seventh goal and came second in the list of the best snipers in the playoffs, equaling Teemu Pulkkinen from Lokomotiv. At the same time, the CSKA coaching staff tried to challenge the goal and took the challenge, but the referees stated that Knight did not break the rules on Johansson.

Despite the fact that during the period Avangard began to look much better, Boucher's goal could hardly be considered logical. The guests looked more confident and at the end of the period they deservedly restored parity, and the goal was organized by representatives of CSKA's star link - Okulov, Shalunov and Alexander Popov, who replaced Mamin in the top three. It was the 40-year-old veteran who performed the miracle pass behind the back and brought Konstantin to the shock position. He left Grubec out of work and caught up with Sergei Tolchinsky in the scorer race (both - 18 points).

One of the distinctive features of the first period was the absence of penalties for both teams - one of the key factors behind CSKA's success in the previous match. Then the hockey players of "Avangard" seven times went to the penalty box, which not only cost them a missed puck, but also took a lot of energy. Unsurprisingly, Hartley asked his players to act as disciplined as possible and not give the judges a reason to determine the violation. At the same time, the army team themselves also hardly wanted to once again find themselves four of them on the ice. Still, the "hawks" 14 distinguished themselves in unequal compositions - the second result in the current Gagarin Cup.

In the second period, the players behaved noticeably less restrained. At Avangard, Alexander Khokhlachev received a two-minute penalty, and at CSKA, Maxim Shalunov and Mat Robinson. The Canadian left the site twice, and both times - for throwing the puck. But the hosts not only did not use any of the opportunities to come out ahead, but also lost in the number of shots - 9:12. Nevertheless, the most striking episode took place at the gates of the army, and Johansson became its hero. The Swede coped with Boucher's throw, but awkwardly shook his head and lost his helmet, but even with this in mind, he did not turn off the game and embarrassed Knight, who arrived in time to finish off.

The beginning of the third segment turned out to be extremely poor in events. During the first nine minutes, the teams once disturbed the goalkeepers and, in general, acted very carefully. In this regard, Shalunov's goal seemed even more illogical than Boucher's puck in the first period. The Avangard defenders seemed to have forgotten that they were facing the best sniper of the KHL playoffs, and allowed Shalunov to shoot from an acute angle without hindrance. Moreover, Grubets could not stay on his feet and began to fall into the near corner, opening the entire range for Maxim. The forward did not miss such a clear chance and brought CSKA ahead.

"Avangard" tried to organize a bulk on the gate of Johansson and even had a good chance to level the score. Kirill Gotovets did not hit the near top corner, Alexander Khokhlachev turned out to be opposite the Swede, but threw him directly into the goalkeeper's body, and Klim Kostin unsuccessfully substituted his club for a cross from the flank. Again, the special brigade of the majority did not achieve success, which received another chance to prove themselves after the removal of Mario Kempé. In the end, Hartley, as expected, went all-in and released the sixth field player onto the ice, but this did not help Omsk. Over the last minute and a half, the hosts could not even gain a foothold in the CSKA zone, and there was no talk of dangerous moments. Nikitin's wards confidently retained the advantage and won an important away victory, which allowed them to take the lead in the Gagarin Cup final.