Simeone's unexpected trident that arose out of necessity

Hidden behind the shadow of Joao Félix and Luis Suárez, also from Lemar, who in recent times had become vital, Simeone has found this April a sharp ... 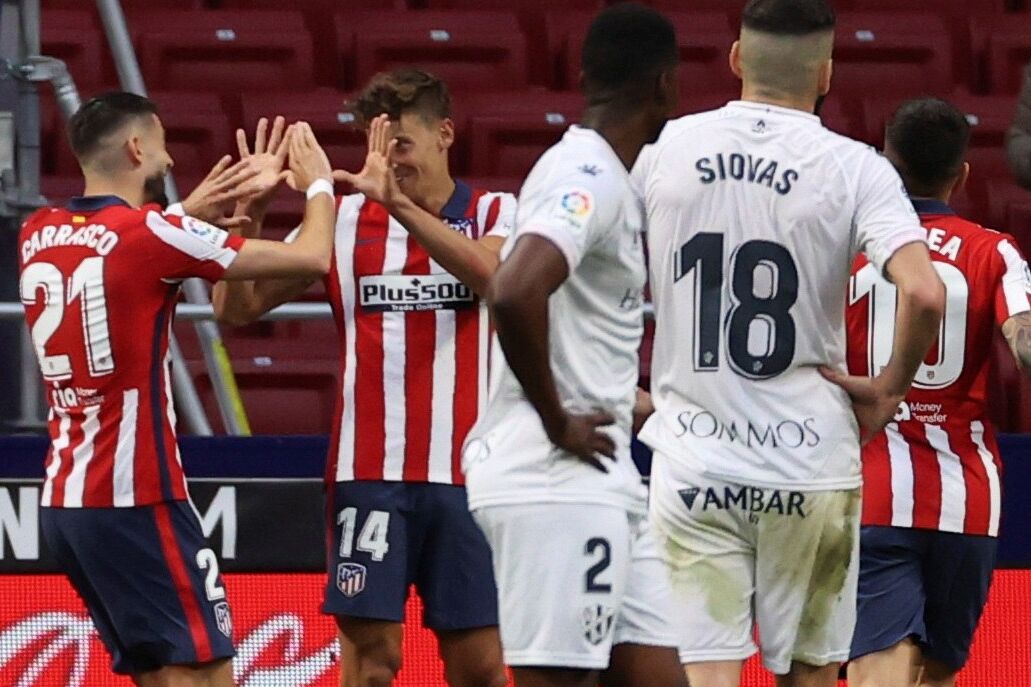 Hidden behind the shadow of

, also from Lemar, who in recent times had become vital, Simeone this April found a sharp trident to hold on to.

Eight goals in three games and all, in one way or another, with the stamp of

. The injuries of his teammates, especially that of Suárez, have forced the Argentine to redraw himself as a pure center forward. The Belgian has abandoned his role as left winger, where he had been shining, to become another arrow in the rojiblanco attack. And the Spaniard has recovered that imposing aura with which he passed over his rivals in the first round.

“Ángel's moment is related to the goal, Carrasco has scored three games in a row, Llorente's work is fantastic ... We are waiting for Lemar, João and Suárez. With everyone's effort, we will seek the objectives, ”was Simeone's summary after achieving the second consecutive victory, again with a clean sheet. Correa assisted at

and, after getting tangled up on that green, on the way to the goal that never came, he has been unleashed with three in two games. Carrasco has been three in a row and Llorente, absent in Seville, has again deployed the flight and is heading towards record numbers in the League with Atlético: 11 goals and 10 assists, with both achieved against Huesca.

«I am happy to be important for the team.

When the team is good it is always easier to play and get the talent, "admitted Carrasco himself, who is living his best days since his return to Madrid, in the 2020 winter market. His six goals and seven assists (Champions included) They are reminiscent of that great version that the tall player left in the fans' retina, before his unexpected scare to China, at the start of 2018.

Without Giménez in San Mamés

Since January, after sealing in

a pristine sequence of eight wins, the rojiblancos had not linked two consecutive victories. Hence the importance of the victory against Huesca, with which they regain control after a night in the hands of Real Madrid. "The last five days mark who is going to fight for the title," Simeone insisted last night, who shuddered in the band when he saw how

, the boy who was about to be his pupil in that summer of 2017, crossed the area of Oblak in search of a goal that, finally, never came.

"We have competed against a team that is milk,"

, aware that his war is another.

Whenever he could, his Huesca did not lack the desire to look for

In fact, what might have been a surprise was in Siovas' boots, the duel just dawned.

Simeone will have to restructure the defense in San Mamés, since

, one of the two warned (so is

Suárez, Joao Félix and Lemar may be ready for the San Mamés duel.

Who knows if there, on the green Basque meadow, he will repeat this successful trident or the heavyweights will return.

LaLiga Santander This is how Simeone's first days in Seville were: "He had a strength and anger that made him seem older"