The Assistant Secretary-General of the General Authority for Sports, Khaled Issa Al-Midfa, revealed that “the authority has finished preparing the UAE sport plan for the next 50 years, and it has been submitted to the higher authorities for approval.” 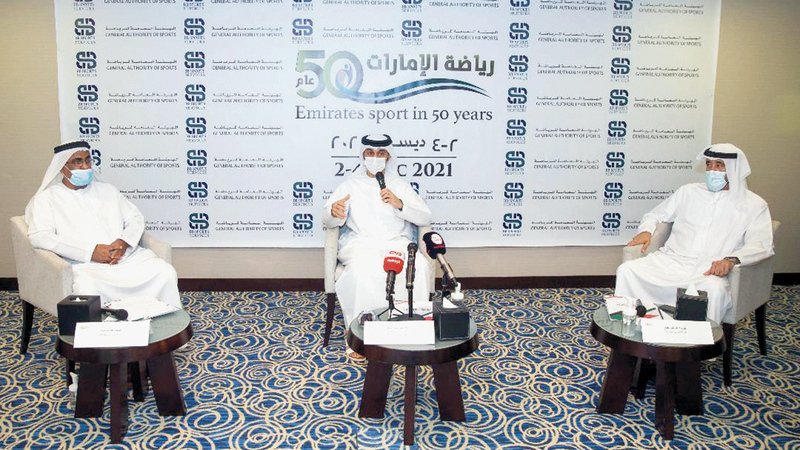 Aref Al-Abbar, Khaled Al-Midfa and Abdullah Murad during the Commission’s conference the day before yesterday.

The Assistant Secretary-General of the Public Authority for Sports, Khaled Issa Al-Midfa, revealed that "the authority has completed preparing the Emirates Sports Plan during the next 50 years, and it has been submitted to the higher authorities for approval." He pointed out that the Authority has prepared many initiatives that will have a significant impact on the sports sector during The coming period, calling on everyone to cooperate with the authority.

Al-Midfa said to Emirates Today, in response to a question about the authority’s ambition over the next 50 years, within the “50 plan”, which the state has put in place in various fields: “We certainly have great aspirations, and the authority has prepared many initiatives in this regard.” The authority held a press conference, the day before yesterday, at the Movenpick Hotel Al Mamzar in Dubai, where it witnessed the launch of a project documenting the march of Emirates sport over the past 50 years, which is a photo exhibition organized by the "BP" Sports Services Company, which will be held at the Dubai World Trade Center from 2 To December 4th. The exhibition documents the various stages that UAE sport has gone through since the founding stage.

Al Midfa added: “Organizing the exhibition comes in light of the celebration of the golden jubilee of the Union, this occasion dear to the hearts of all citizens and residents of the country, and through it they will remember all the achievements of our beloved country in various fields, under the tireless guidance and supervision of our wise leadership, which gave everything it has for the sake of The elevation of this country and its people ».

He said: “The UAE sports sector has contributed to the registration of many of the country's sporting achievements at various local, regional and international levels, which makes it imperative for us to recall these achievements during the celebration of the Golden Jubilee, through the (UAE Sports in 50 Years) exhibition, which will be available to everyone, whether To participate or attend ». He indicated that they welcomed in the authority various proposals and ideas that would contribute to documenting the march and achievements of the UAE champions in various fields, including the documentation of the Olympic champion Sheikh Ahmed bin Hasher Al Maktoum, the holder of the first Olympic gold medal in the history of the UAE, and won it in the Olympic Games ( Athena 2004), when he won the double pit plate shooting competition title. Al Midfa revealed the issuance of a special book documenting the Emirates Sports Exhibition since its inception stage.

The exhibition also includes a special corner for the most important tournaments organized by the country, such as the FIFA Youth World Cup, the Dubai International Basketball Championship, the Junior Volleyball World Cup, the Gulf Championships, the Rashid International Volleyball Championship, the Sheikh Mohammed bin Khalid International Handball Championship and the Asian Championship. For football, the exhibition will also include a corner for sports councils, federations and clubs, for the first athletes and champions, and pavilions for sports media institutions and sports publications, in addition to providing an opportunity for companies specialized in the trade of clothing, equipment and sports collectibles for amateurs and professionals, and medical centers specializing in sports medicine.

Al-Midfa continued: "We ask all parties, whether institutions or individuals, to cooperate and contribute with us to the success of this event."

For his part, General Coordinator of the exhibition, Abdullah Murad said: “The exhibition will be a suitable platform for all workers in the sports sector, within various disciplines and areas to participate, and to review their services and sports products for a wide audience in the country during the period of the exhibition, not to mention the promotional campaigns that will precede the exhibition using various Traditional and modern marketing tools to familiarize the public with this exceptional event, in addition to the media coverage accompanying the exhibition period to shed light on the various events and events that will be included in the exhibition.

In turn, Aref Al-Abbar, from BP Sports Services, said that the exhibition aims to introduce new generations to the sporting history of the UAE.

He added, "We will do our best to make this exhibition a success, which has been haunting us for many years."

The Director of the Information Technology Department at the authority, Saeed Mahyouh, during the conference gave a detailed explanation about the role that his department plays, especially with regard to the provision of sports data and statistics, indicating that the authority launched in this regard a digital platform for sports federations, in which all the required data and statistics are available. To facilitate the work of decision-makers in this regard.

Exhibition «Sport of the Emirates in 50 years»:

It will be held at the Dubai World Trade Center between the 2nd and 4th of next December.

It documents the various stages that the sport of the Emirates has gone through since its inception.

Available for everyone to participate and attend.

- It includes a special corner for the most important tournaments organized by the Emirates, and the achievements of heroes in various sports.

It includes special suites for councils, clubs, federations and the media.

It provides the opportunity for specialized companies and medical centers to participate.

• Issuing a special book documenting the UAE Sports Exhibition and celebrating its achievements.

• «The Commission» revealed a special platform for sports federations, which provides all data and statistics.