The focus of the first stage of the new season of the Super League is here! 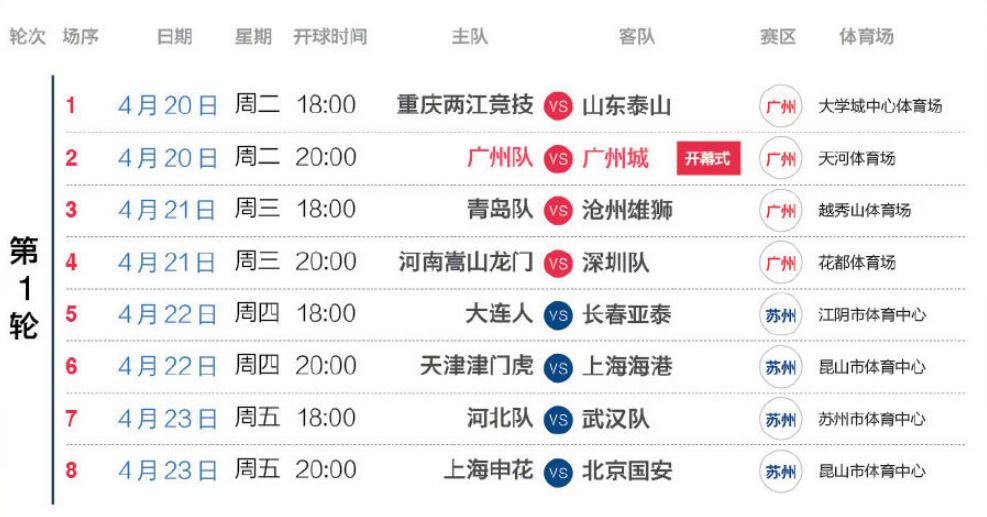 After a long winter, the new Chinese Super League season will officially kick off at 20:00 on the 20th.

The first stage of this year's Chinese Super League still implements the competition system, but according to the schedule, there will be a double loop of 30 games. Compared with last year, it is closer to a more normal competition system to a certain extent.

The first round of the Super League schedule.

This is the first season of the post-Jinyuan era. It brings together the "Eight Champions" Guangzhou team, which is not moving, Shanghai Shenhua, which has upgraded the lineup, and traditional strong teams such as Shandong Taishan and Beijing Guoan...Perhaps, a new league pattern is coming. set up.

Chinanews.com will sort out the unmissable matches in the first stage of the new season. After watching these, none of the first 14 rounds of focus will be missed!

Data map: Guangzhou team was crowned the "Eight Champions" of the Chinese Super League in the 2019 season.

As the opening game of the new season of the Super League, the Guangzhou Derby will be very intense under the expectations.

It is reported that 30,000 fans will enter the game to watch the match, which will also become the single sports event with the highest number of spectators in China since the epidemic.

While showing the anti-epidemic results, this familiar taste will also add a lot of excitement to the game.

After all, in the past year, domestic and foreign football leagues with fewer live audiences have indeed become a lot boring.

In addition, another big point is the status of the Guangzhou team, which is not moving in the winter transfer window, in the new season.

In the winter window of this season, the previous big signings Guangzhou team is almost the "quiet" of the 16 Super League teams.

In the case of 0 signings, also let go of midfielder Xu Xin.

The Brazilian foreign aid Paulinho and Talisca were unable to return to the team on time due to the epidemic prevention and control, which further stretched the midfield position of the Guangzhou team.

Whether the "Eight Champions" Guangzhou team still possesses the dominant power, this Guangzhou Derby will be able to get a glimpse of it.

The Beijing Guoan team has five new players this season.

The games of these two veteran Chinese Super League teams have always been exciting and intense. At the same time, the two teams also have a rare background.

The encounter in the first round of the new season also added a lot of highlights to this Beijing-Shanghai battle.

In the winter window of this season, Guoan and Shenhua have both upgraded their lineups.

In terms of foreign aid, Augusto and Fernando were unable to return to the team on time due to the epidemic.

However, with the core Biella and striker Bacambu, Guoan's foreign aid combination still has a full gold content.

Whether South Korean celebrity Cui Kangxi can raise the Shenhua team to a new height in the new season is worth looking forward to.

It is also worth seeing what new look will be brought to the team by Guoan coach Bilic.

With the FA Cup champion Yu Wei, Shandong Taishan is bound to make a breakthrough in the league this season.

The opponents of the two teams in the first round are not strong, and it is not difficult to win without accident. Therefore, the encounter in the second round will be a key point for testing the quality of the two championship teams, and even affect the team's direction in the first stage.

The overall change in Shanghai Seaport Winter Window is not big. The international defender Li Ang introduced from the Jiangsu team made up for Shi Ke's departure from the team.

After Hulk left the team, Shanghai Seaport introduced centre-back Mestorovich. Unfortunately, the Croatian foreign aid was seriously injured before he played for the team and will be out for a long time.

However, with the foreign aid combination composed of Oscar, Anautovic, Lopez, and Mui, the degree of luxury is one of the best in the Chinese Super League in the post-Jinyuan era. It depends on whether the new coach Lecco can knead the entire team and play. Desirable combat effectiveness.

As far as Guoan is concerned, he will have to face the Shanghai duo one after another as soon as he comes up. There really is no room for adapting to the new season.

In the case of 30 league rounds, the two championship teams will definitely not "play leisurely" like last year's first stage. The encounters that are related to the direction of the season must be full of highlights.

5.Shanghai Shenhua vs Shanghai Harbour (third round) May 5th 20:00

In the Shanghai Derby, Shenhua has not always been dominant in the face of Shanghai Harbour, but has undergone further reinforcements. In addition, this is the third season in which Cui Kangxi has coached the team. The team's overall play style is gradually taking shape.

The Shanghai Harbour Hulk leaves the team, the main lineup is further aging, and the team's reinforcement is limited. Therefore, the gap between the two sides has further narrowed under the situation of one and the other. This also adds a lot of suspense to this derby.

In the opening stage, Shenhua and Shanghai SIPG are more difficult to play. Whoever wins this crucial battle will have a huge impact on the first stage of the trend and the team's mood.

The long-lost Qilu Derby, Shandong Taishan finally ushered in a direct contest with the Qingdao team again after a lapse of seven years.

In history, Qilu Derby has never lacked gimmicks, both on and off the court.

Although today's Qingdao team is no longer the Qingdao team of the year, given the geographical attributes of the two teams, the level of excitement is still not low.

The two teams that have "resurrected from the dead" in the past two years are all big signings in the winter window of this season.

After the Cangzhou Lions introduced 14 new aids, including Xie Pengfei, Luo Jing, and Abdulheimiti, the team's local lineup has been greatly upgraded.

However, lineup running-in is a prominent problem that both teams must face. What kind of sparks the two teams with a new look can make on the court is worth seeing.

In the last round of the 2018 season, Dalian Yifang (the predecessor of Dalian) defeated Changchun Yatai 2-0 with a thrilling relegation, and the latter had no choice but to face the fate of relegation.

Three years later, Changchun Yatai made a comeback, and the two teams happened to meet again in the first round.

This long-lost "Northeast Derby" has a hint of "revenge".

In the winter transfer window, the big recruits of Dalian in the past few seasons were relatively quiet. After the departure of the famous coach Benitez, the entire winter training preparations were carried out without a head coach until the start of the season. Announcing Jose took office.

In terms of foreign aid, only Danielson accompanied the team for winter training.

After Longdong and Hamsik left the team, the team's frontcourt system is also facing the problem of re-finding the core. Without reinforcements and long-term absence of training from foreign aid, it can only be said to be more difficult.

On the other hand, the newly promoted Changchun Yatai has all foreign aids in place, including Zhang Yu from Beijing Guoan and Hui Jiakang from Tianjin Jinmenhu.

The Northeast Derby in the first round of the season is not lacking in highlights, and it is likely to be a wonderful revenge battle.

Attached to the full schedule of the first stage of the Super League, which one are you most looking forward to?