The star of the national snooker team and the 98th medalist in various tournaments, Mohamed Shehab, announced that he has established a snooker team of people of determination that will be the nucleus of the team, through the Q Sports Academy that he owns and manages in Zayed Sports City, as the team includes players Saeed Al Zaabi (Obstacle 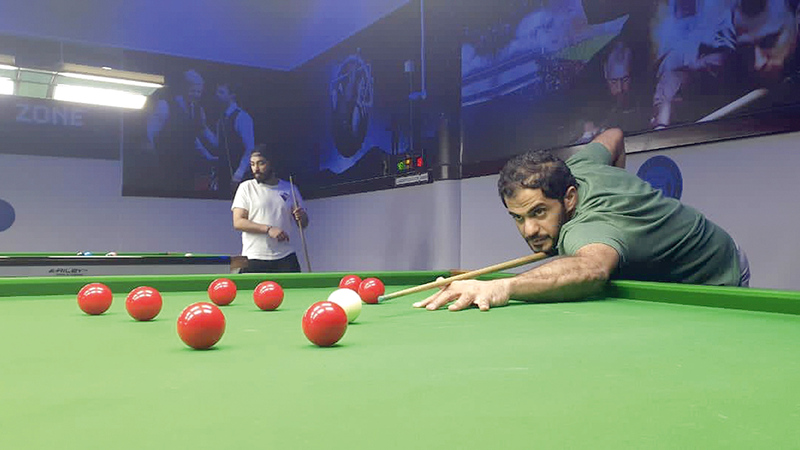 He considered it the nucleus of the national team, and included the duo Saeed Al Zaabi and Taeb Al Kaabi

The star of the national snooker team and the 98th medalist in various tournaments, Mohamed Shehab, announced that he has established a snooker team of people of determination that will be the nucleus of the team, through the Q Sports Academy that he owns and manages in Zayed Sports City, as the team includes players Saeed Al Zaabi (visual impairment) ), And Taib Al Kaabi (a motor impairment).

Shehab told "Emirates Today", "The trend towards investing in the sports sector and building generations capable of succeeding the current Emirati sports stars, was behind the idea of ​​opening the Snooker Academy in 2018, in an idea that was encouraged and supported by the responsible authorities in Zayed Sports City," And during the past month alone, I was recognized for the activities of the Academy, which over the past months was able to cultivate talent and create three players who are now among the stars of the youth team, in addition to establishing the first Emirati and Arab national team for people of determination recognized by the International Federation. ”

He explained: “Since my professional play in the year 1993, I have been calling on everyone, whether the federation of the game or the sports authorities, to build strategies capable of creating champions who will succeed the current generation. The future, whether in the game of snooker or billiards, and allocating part of its strategic plans to support people of determination, to produce the desired results by establishing the first snooker team of people of determination, through the duo Saeed Al Zoubi and Taib Al Kaabi, in a step with pride and through the (Zoom Sport) Academy. The UAE was the first Arab country to succeed in joining the World Handicap Federation (WDSA) for Snooker.

He added: “Despite the difficult conditions that prevailed in sport in all world countries as a result of the Corona pandemic, and prevented me from competing in more tournaments and the Emirati sport was awarded the 100th medal in snooker, the pandemic has positive aspects, as it allowed me to establish the nucleus of the first national team for people of determination.”

Shihab talked about the difficulties he faced in recognizing the academy until obtaining support for the People of Determination team for snooker, and said: “All officials in the sports sector and federations must be up to the responsibility entrusted to them, or leave the field for members who are able to manage games in a modern way that keeps pace with development. What is happening on the world stage, and unfortunately, most of the current officials in the federations still run sports in an old, outdated manner, which was confirmed by the slow recognition of the Academy, which over the past months presented young talents that succeeded in imposing their presence in the list of the youth team ».

He continued: "The same applies to the lack of obtaining the required support from the game association, for establishing the People of Determination national team, and working to develop it, especially since dealing with this segment of athletes requires the presence of experts and technical and training teams capable of upgrading their levels."

star of the national team: Some still manage sport in an old fashion.