Bottas and Russell, on the verge of disaster in Tamburello: "Did you want to kill us?"

The fight for ninth position could have ended very badly between Valtteri Bottas and George Russell, protagonists of a tremendous accident upon arrival at Tamburello, one of the curves with ... 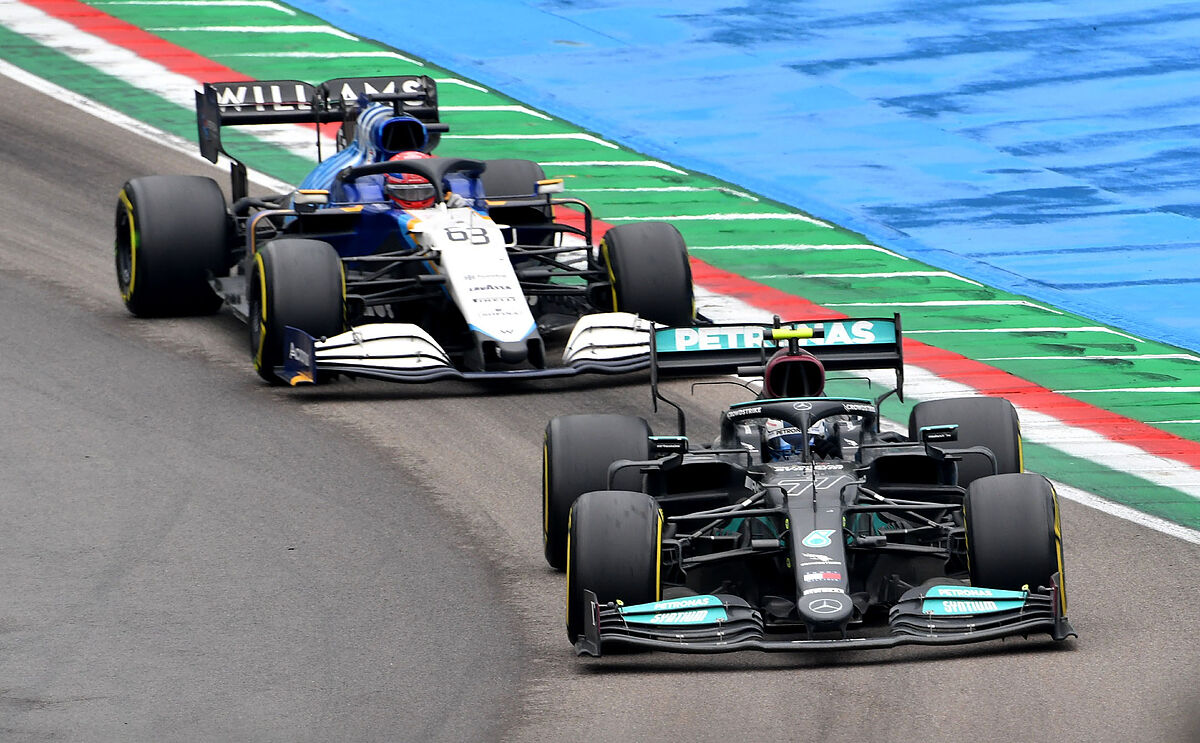 The fight for ninth position could have ended very badly between

, protagonists of a tremendous accident upon arrival at Tamburello, one of the curves with more history in Formula 1. The British, with little space on the outside, he stepped on the grass and crashed into the Mercedes at almost 300 km / h.

No driver suffered physical damage, but the anger of the leader of Williams was staged on the pozzolana.

"I don't know what he was talking about because he couldn't listen, but it was clearly his mistake," explained Bottas, about the moment Russell approached his car to ask for an explanation.

The fury of the young man, on loan from Mercedes and aspiring to the Finn's seat, was very striking.

He even touched his opponent's helmet with his glove.

Even after a few minutes later Russell did not seem to have calmed down.

"In dry conditions I would have accepted it, but he took me to the wet area and I lost control. I simply asked him if he was trying to kill us both," cried

, looking for some essential points for his team .

"A ninth for him is nothing"

That tremendous appetite, precisely, seemed to serve as an alibi for his arguments.

"From his point of view he was not fighting for anything. A ninth for him is nothing, but for us it is everything. There is not a single reason to move like that," added Russell, who had already astonished in Saturday's qualifying with medium tires.

Bottas' explanations of what happened on lap 30 seemed more guided by sanity. "I could see him on the straight and then I realized that he was going to the right. After seeing the repetitions I can assure you that I always left space for both of us to fit. He lost and hit me. That's all over," concluded the number two of the Silver Arrows.

"They did not have a very friendly exchange of words, but we need to see the images again. It may not be a 50% -50% responsibility, but I do not know who is more to blame," said

, head of Mercedes, who usually launches scathing comments to Russell about the effects his mistakes can have. "Today we are closer to driving in the Renault Clio Cup than in Mercedes", launched the Austrian, half seriously, half jokingly.

As soon as the race finished,

called the protagonists to testify to clarify what happened.

The stewards' decision will mark the culmination of an exciting race at the Enzo and Dino Ferrari Autodromo.

Formula 1 No truce in Imola: Verstappen breakdown and scare for Leclerc

Formula 1 Verstappen shows his chest in Imola, with Sainz fifth and Alonso eleventh

Formula 1The hope of Alonso and Sainz: the factors that point to a more even World Cup