Fede Valverde's ankle, Courtois hero and extreme survival: "We knew we were going to suffer"

Between the Titanic Hotel, in homage to the ship, where Madrid stayed, and Anfield Road there are barely ten minutes by bus. Three kilometers in which the Madridista vehicle ... 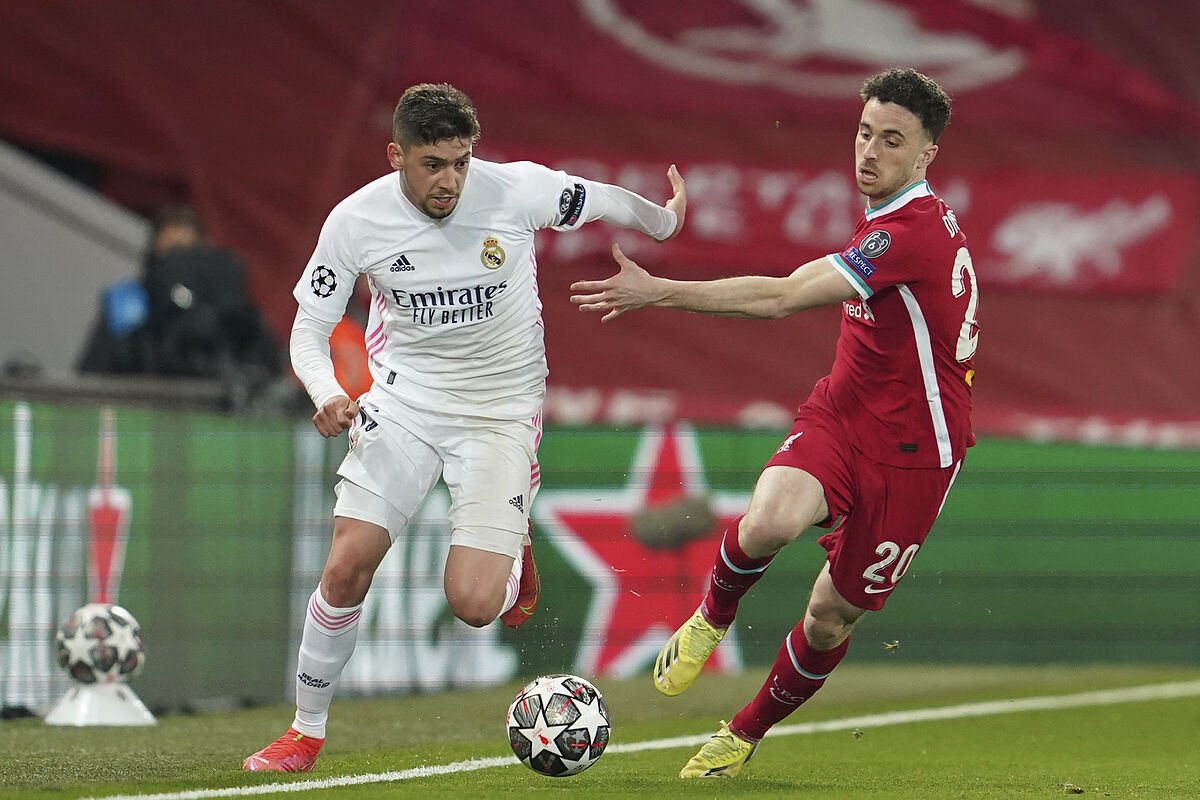 , in homage to the ship, where Madrid stayed, and

there are barely ten minutes by bus.

Three kilometers in which the Madrid vehicle did not even touch the center of the city.

Zidane's people settled for the vicinity of their hotel, a former rum factory in front of an abandoned 14-story warehouse.

At the time, the largest brick building (27 million) in the world.

Now, the location of the filming of one of the Captain America movies and the views from the windows of the white footballers.

And a few minutes away, the football field, the other great monument of Liverpool.

Around it, a neighborhood that suffers the consequences of the pandemic and lives for the ball:

Hostels and bars awaiting your salvation.

"It's not usually available, but you're in luck," read the website of one of those hotels.

The photo of Valverde's ankle

Already on the grass,

showed the network tension with a red face from minute one.

! ”He said, with a smile, to the Brazilian after an entrance on

Zidane, meanwhile, was trying to calm down a

who was making his sideline debut in the puzzle of Madrid's survival.

, the Uruguayan's wife, discovered with a photo the extraordinary effort of her husband.

In a call made moments before the match, Valverde showed him his

from the blow suffered in the classic.

He played, despite everything, one of the duels of his life.

Along with Fede, the tension, the memory

we are physically at the limit

" and the four saving stops by

, whom his teammates hugged at the end.

The Belgian achieved his second clean sheet in a month and a half and leaves the most important week of the season with only two goals conceded.

Defensively we have been spectacular,

If we are here, it is for something,

"It is very difficult to play in this team but they have shown that they are prepared," praised Casemiro.

"We have not won anything"

109th anniversary of the Titanic

, Madrid did not sink and returned to the hotel that reminds us of the cruise, once again exceeding a

He has not fallen into them since 2004 against

and returns to a

"We knew we had to suffer, they are a quarter of the Champions League, but we are proud," admitted Zidane, who once again avoided praise for his figure despite his fourth semi-final as a Madrid coach: "We are all together.

With everything that is happening to us and

the team is always there and we want more

We have not won anything.

Work has given us the classification

It is the key to the titles.

We played to win.

The Brazilian is already going for his fifth orejona.