Elisabet Gunnarsdottir took Damallsvenska Kristianstad to Europe after the success last year. When the dream job as the national team captain for the Icelandic national team recently appeared, she felt compelled to say no. - I felt a little stress over the decision and thought back and forth for two weeks. It has been a dream job for several years for me, says the coach.&nbsp; 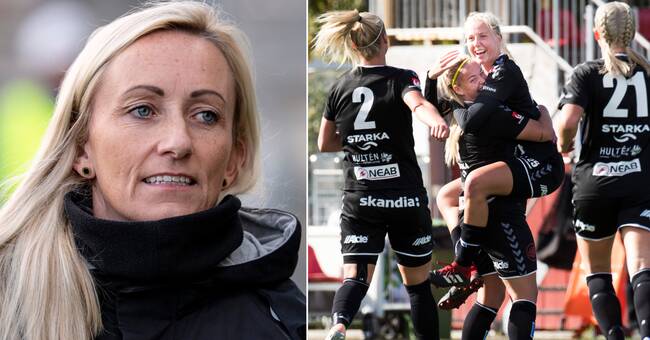 When Iceland's national team captain Jon Thor Hauksson had to leave his job after a drunken scandal, Elisabet Gunnarsdottir was suddenly asked to take over in January.

Her demand was to be able to train Kristianstad in parallel during 2021 and then completely transfer to the Icelandic federation for the European Championship year 2022.

- We had some conversations and it tended to be like that, but then there was a turnaround from their side and they were not prepared to have it like that.

I had to quit my job in Kristianstad, says Gunnarsdottir.

The coach was forced to weigh the dream job as national team captain against loyalty to Kristianstad.

Saying no was not easy.

- It has been a dream job for several years for me.

It felt right at the time to take it now but it came so unexpectedly.

I had signed a contract with Kristianstad and sat down with the players and talked about what we want to do this year.

And it would have been very difficult to find a replacement at the end of January.

You do not do that, even if the job was very attractive, says Gunnarsdottir.

After the success and third place in the damallsvenskan last year, Kristianstad reached a Champions League place for the first time.

In the end, it was absolutely crucial for Gunnarsdottir's decision to stay for a 13th season.

It had a lot to say.

We have been aiming for that goal for a long time and we will succeed with it.

There was no way in my world to let it go.

In addition to the European Games, the team is investing in a new top position in the damallsvenskan and would like to top the historic third place.

- We will make an attempt to do so.

We want to get better and develop both games and the association.

We aim higher but I am fully aware that there are no easy competitors above us.

They are strong and may look even stronger this year.

Is it realistic to think that you can fight for the gold?

- Yes, why should it not be realistic?

Everyone is with zeros in the table now and we were not many points from last year.

I see no reason not to give it a chance and chase the opportunity anyway.