Prakaten's historic victory and five more gold medals: how were the European Championships in weightlifting, taekwondo and rowing

The European Weightlifting, Taekwondo and Rowing Championships ended last Sunday. Russian weightlifters won nine medals in Moscow, including one gold medal, which was won by Daria Akhmerova. In taekwondo, domestic athletes won four victories and won the overall standings of the competition. The rower Anna Prakaten brought Russia the first ever gold in the continental championship. 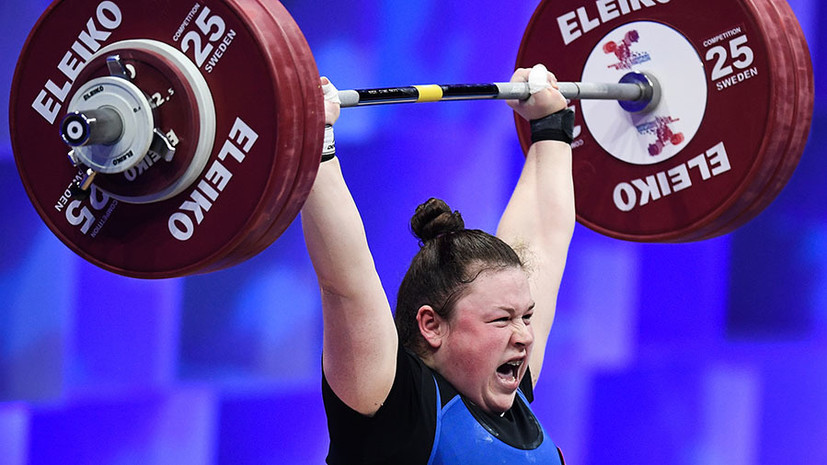 The European Weightlifting Championship has ended in Moscow.

For weightlifters of the Old World, the tournament became the first major competition since the start of the coronavirus pandemic and the main test of strength before the Olympic Games in Tokyo, which is just over three months away.

But fans will also remember this start for the ambiguous behavior of the Ukrainian athlete Dmitry Chumak and his loud statement on Instagram.

Chumak took part in the weight category up to 109 kg as part of his national team, whose arrival in Russia became a landmark event in itself.

Ukrainian athletes do not always come to competitions in the territory of a neighboring country.

Suffice it to recall that in 2019 they did not play at the Winter Universiade in Krasnoyarsk and refused to participate in the qualifying tournament for the Beach Soccer World Cup in Moscow.

This time the weightlifters decided to come, having sent a delegation of 16 athletes.

For Ukrainians, the tournament in Moscow turned out to be very successful - the gold medals were won by Kamila Konotop, Irina Dekha and Alina Marushchak.

The fourth medal of the highest dignity, which made it possible to win the overall standings, was put into the common piggy bank by Chumak.

He lifted 407 kg after the snatch and clean and jerk, showing a personal record in total, and became the European champion for the third time in his career.

It is worth noting that the main favorite of the competition, Armenian Simon Martirosyan, did not take a single weight in the clean and jerk, although he was leading by a large margin after the snatch.

He posted on his Instagram a post with a picture showing the burning Cathedral of St. Basil the Blessed and the destroyed Spasskaya Tower of the Moscow Kremlin.

The weightlifter accompanied the image with lines from the song "Moscow" by the "Leningrad" group.

“Yesterday I had a beautiful dream - Moscow burned down entirely.

A fire on the square on Krasnaya, and the former Election Commission is smoldering, "Chumak wrote, adding the following verse, which contains profanity and mentions Russian President Vladimir Putin.

Instagram users were surprised that the athlete spoke so about the city where the competition was organized, and also found it strange that the Ukrainian weightlifter did not write anything in his native language.

Later, Chumak published another post, this time with his photograph, which was accompanied by a laconic inscription: “Victory of our team!

Nine medals and one victory for the Russians

If the Ukrainian national team won the overall standings of the European Championship, then the hosts of the competition were able to win the most medals.

The Russian team won nine awards, eight of which were won by girls and only one - Timur Naniev, who fought with Chumak in one weight category.

The only victory was won by Daria Akhmerova, who recently represented Kazakhstan.

However, she will not be able to compete in Tokyo for an Olympic medal - she did not fulfill the qualification conditions.

Only Kristina Sobol, Svetlana Ershova or Kristina Novitskaya have the opportunity to enter the Russian national team, despite the fact that there is a place in the team for only one of them.

Initially, the ticket was supposed to go to the multiple world champion Tatyana Kashirina, but due to the ongoing doping investigation, she is unlikely to be able to perform in Tokyo.

For the other three candidates, the European Championship was a test on which their future depended heavily.

If in the end Novitskaya never made it to the start, remaining a reserve, Sobol and Ershova tried to prove themselves.

They both took second place in the 49 and 55 kg categories.

Now, according to the head coach of the women's team Gennady Anikanov, the 29-year-old Sobol, who won her second silver in the European Championship, has more chances.

“The decision on who will eventually go to Tokyo will be made about a month before the start of the Olympics.

Today, in the absence of Kashirina, Sobol has a higher rating, but here a lot will depend on health.

If health permits, of course, Christina will go.

If not, then Ershova, most likely, ”Anikanov told TASS.

In the men's team, the issue of representation at the Olympics is not so acute.

At the European Championships, Timur Naniev won the only medal, from whom the best result was expected.

He competed in the same category with Chumak and took third place.

Naniev is now expected to add to the Olympics and be able to claim a medal.

So, at least, says the head coach of the Russian men's national team, Oleg Pisarevsky.

“Timur is a very modest person, and he hid from the journalists that he had problems with his leg while preparing for the competition, and we even had doubts whether he would be able to compete here.

He is our only candidate for the Olympics, he has successfully passed rating tournaments.

We hope that in Tokyo he will be able to show results that are an order of magnitude higher than here.

Timur is capable of more, here he was restrained by an unhealed leg.

I really hope for this very humble and very hardworking athlete.

Timur is able to add 10 kg to today's result.

And he will go to Tokyo to fight not for a place in the top five or six, but for an Olympic medal, ”Pisarevsky is sure.

Taekwondo triumph in the European arena

On the same days, the European Taekwondo Championship was held in Sofia.

As part of the Russian national team, all members of the Olympic team and candidates for it, who have yet to pass the selection, took part in it.

All of them managed to win the overall medal standings of the competition for the second time in a row.

Maxim Khramtsov won in the weight category up to 80 kg.

At the age of 23, she won her third gold in the continental championships.

Vladislav Larin, competing in the heaviest weight over 87 kg, did not manage to do the same way.

He made it to the final, but lost only one point in it to the Belarusian athlete Armand-Marshall Silla, who recently served a four-year ban for meldonium.

Another future Russian Olympian, Mikhail Artamonov, competed in the category up to 58 kg, but did not make it to the number of prize-winners.

The fifth Russian athlete in Tokyo in a month may become Elizaveta Ryadninskaya, representing a weight of up to 49 kg.

Sarmat Tsakoev (up to 68 kg) and Yuri Kirichenko (up to 87 kg) also became European champions, which made it possible to repeat the result of the last tournament in Kazan in terms of the number of victories.

Also, Larisa Medvedeva (up to 46 kg) put silver in the team's piggy bank, and Vyacheslav Bovkun (up to 54 kg), Kristina Prokudina (up to 62 kg) and Polina Khan (up to 73 kg) added bronze medals to it.

The European Rowing Championship was also held from 9 to 11 April in Varese, Italy.

In this sport, Russian athletes rarely achieve high results, but this time they managed not only to take part in the drawing of medals, but also to celebrate a historic victory.

Its author was Anna Prakaten, who played in the past for Belarus.

At the beginning of the week, she already competed in Varese in the Olympic qualifying tournament and won the quota in the women's singles.

A few days later, she again had no equal, only now in a dispute with even stronger rivals.

In the European Championship finals, Prakaten led the race early and did not allow anyone to approach her throughout the distance, although she was pursued by such eminent athletes as the 2017 world champion Jeannine Gmelin from Switzerland and the silver medalist of those competitions Victoria Thornley from Great Britain.

Prakaten 'won the first gold in the history of Russia in women's singles - the previous success dates back to 1973, when the Lithuanian Genovaite Ramoshkienė won the USSR national team.

Another medal was won by the Russian rowers in the competition of eights.

As well as two years ago, they reached the finish line third.

Interestingly, in the dispute for the medal, the Russians were able to bypass the strong crew from Great Britain, which so far was the only one from Europe who was able to secure a trip to the Olympics.