Azmun's double, Dziuba's offside and Lovren's injury: how Zenit beat Sochi and continued to fight for the RPL gold

Zenit beat Sochi 2: 1 away in the match of the 25th round of the Russian Football Championship. The victory for the wards of Sergei Semak was brought by the double of Serdar Azmun, who single-handedly led the race of the scorers of the Russian Premier League. The only goal for the home team was scored by Nikita Burmistrov. In this match, Artyom Dzyuba also had the opportunity to excel, but his goal was canceled due to an offside position. The game was missed by the defender of St. Petersburg Dejan Lovren, who was injured shortly before the starting whistle. 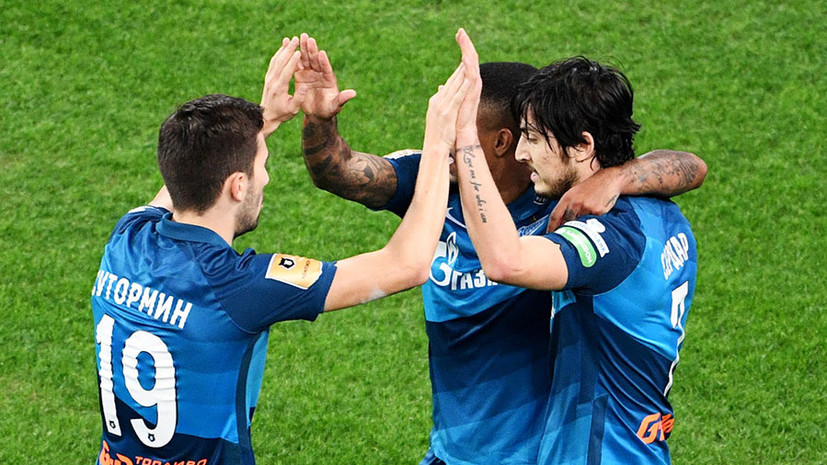 Fight for European cups and talk about the farm club

The Moscow derby of Lokomotiv and Spartak in the 25th round of the Russian football championship preceded the match, from which the fans expected a fierce struggle and an unpredictable result.

"Sochi" at home hosted the leader of the tournament table "Zenith", hurrying to his third title in a row.

The history of the confrontation between the two teams is not too long, but it managed to acquire real myths.

Due to the fact that there are many former Zenit players in Sochi, fans have long called it the St. Petersburgers' farm club.

Every time this statement has to be refuted by the head coach of Sochi residents Vladimir Fedotov.

Before the current game, he noted that he did not share the meetings according to the level of importance.

“For us, all matches, without exception, are important and fundamental.

It is clear that everyone wants fried food, but would not like to focus on Zenit or anyone else.

Before him we had Lokomotiv, Rubin, Tambov - and they all have the same meaning for us.

If we divide the matches into important and not, then the attitude of the guys to some of the games will not be as it should be, ”Fedotov told Sport-Express.

So far, however, Sochi has never defeated Zenit in the RPL.

The team's predecessor, Dynamo St. Petersburg, managed to defeat their fellow countrymen, but only in the Russian Cup in the 2017/18 season.

It was extremely necessary to interrupt the unsuccessful series of Sochi.

In the fall, the club sensationally claimed to be in the European cups, and after the resumption of games in the RPL and the victory over Arsenal, it even ended up in third place.

But in the next four rounds Fedotov's wards scored only four points (three of them - in the match with the hopeless outsider Tambov), and the closest competitors moved the Sochi players to the seventh line.

The team's downed attitude was confirmed by the departure from the Russian Cup four days before the arrival of Zenit.

Another defeat from St. Petersburg would leave the team even less chances of returning to the European championship zone.

Zenit resumed the season, too, not very well.

He was eliminated from the cup competition, only at an even earlier stage, drew with Rostov and lost to Rubin.

But then the reigning champions won three matches in a row, breaking the resistance of Akhmat, CSKA and Khimki.

A victory over Sochi, subject to a possible misfire of Spartak in the capital derby, could increase the advantage of Petersburgers to seven points - five rounds before the end of the season, such a difference may already be unplayable.

On the day of the match, Zenit was left without a leading defender Dejan Lovren.

Three years ago, the Croatian defender beat the Russian national team at the World Cup in Sochi, but was unable to return to his happy Fisht stadium due to injury.

The absence of one of the guests' leaders inspired Fedotov's wards for a good starting assault.

First, Artur Yusupov shot above the gate from a good position, and then Nikita Burmistrov tried to create two chances.

Zenit responded only in the 14th minute.

Serdar Azmun completed the counterattack and shot low, but Nikolay Zabolotny, who replaced Denis Adamov in the goalkeeper position, deflected the kick.

As it turned out later, until the end of the first half, this was the only hit on target performed by any of those present on the field.

In the following minutes, Artyom Dzyuba managed to break through twice, but both times he sent the ball past the goal.

The Russian forward had no luck further.

During the penalty kick in the 35th minute, Dziuba closed the canopy of Yaroslav Rakitskiy and sent the ball into the far corner, but the referees immediately canceled the goal.

The striker was offside, so he could not become the sole leader of the bombing race, leaving Azmun behind.

Zenit did not create any other chances - Sochi defended with dignity, deciding to postpone attempts to open an account for a while.

After the break, Azmun tried to take the game into his own hands.

The Iranian was also caught in an offside trap set by the home team, and soon found himself in an excellent position again after a pass from Vilmar Barrios.

Zabolotny this time also coped with the aimed blow of the attacker.

As a result, the Sochi players did it.

Three minutes later, Yusupov got to someone else's penalty area and shot into Lunev.

The ball bounced off the goalkeeper straight into Burmistrov, and the defender immediately hit the crossbar.

Fedotov's wards had a chance to catch up with Lokomotiv, occupying the third line, on points, but for this they needed to keep the score for more than half an hour.

But "Zenith" was not for long in the role of catch-up.

Five minutes later, Christian Noboa dumped Malcolm next to his own penalty.

It was impossible to assign a penalty for this violation, but the guests still received a very dangerous standard.

Rakitskiy accurately hung in the center, and now Azmun was able to outplay Zabolotny and come out ahead in the bombardier dispute with Dziuba.

Semak's wards needed to continue to attack, and for this the coach replaced Malkov with Andrey Mostovoy for the third time in a row.

But Azmun continued to score himself.

In the 80th minute, Douglas dos Santos gave him an accurate pass, after which the Iranian rebounded from the bar and sent the ball into the goal.

This goal became for him the 15th in the current RPL season.

As a result, Zenit brought the match to victory. This defeat was the second in a row for the home team, and now they will have to join the fight for European cups in the next match against CSKA. Petersburgers are expected to return to the Kuban in a week and a meeting with Krasnodar on its field.