Renberg: "Leksand and Skellefteå are outsiders"

Växjö and Rögle are the expert's SM gold favorites. But there are two challengers: Leksand and Skellefteå. - Now they have a good team and work hard for each other, says Mikael Renberg about Leksand before the quarter finals. 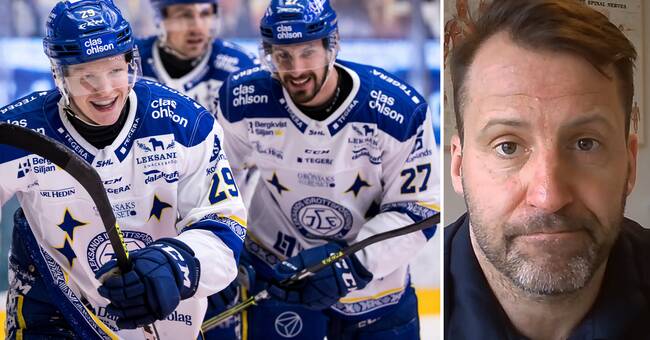 It's time for the quarterfinals of the SHL playoffs.

SVT Sports expert Mikael Renberg was given the task of predicting how he thinks things will go in the four different series.

Where the series winner Växjö is up against Färjestad, Renberg believes in the Smålanders.

- Växjö is consistently the most stable team in the SHL.

They have a very good goalkeeper, a good stable defensive game and enough players who can make a difference offensively.

It is in this quarter-final series that Renberg has his gold favorites.

- I think that Växjö will win the Swedish Championship gold and I think that above all their goalkeeping and defensive play will go a long way.

Rögle was for a long time the "team to beat" during the basic series.

But through a slightly weaker second half, they finally lost the series victory to Växjö.

When ängelholmarna is now up against the latest Swedish Championship gold winners Frölunda, Renberg believes in the Scanians where Roger Rönnberg's men have not really been recognized this season.

- Frölunda has been too swaying during the season and Rögle will be better over a long match series.

Rögle has had the best offensive in the series and is

good, simply a more even team and you will win on that, says Renberg and continues:

- The top players in Frölunda that they have lost have not really managed to replace.

You are not as sharp offensively as you have been before.

Can challenge for the gold

According to Renberg, the smoothest and most uncertain quarter-final will be the one between Leksand and Örebro.

- It is difficult, but I bet Leksand.

Leksand is the big surprise in the series.

Sure, their first five have done a lot, but otherwise they look much more stable.

- For the first time, I think they have a team that sells itself expensive every single match.

Historically, when you go back 10-15 years, Leksand has always given in and not been able to meet the better oppositions.

But now they have a good team and work hard for each other.

Can Leksand challenge for the Swedish Championship gold?

Växjö is my main favorite, Rögle is the second-hand favorite and then Leksand and Skellefteå are my outsiders.

"Not an easy series"

The just mentioned Skellefteå is set against Luleå in a battle in the north.

Skellefteå comes in with a good form at the same time as Luleå has been a bit of a disappointment during the season where many had high expectations of Thomas Berglund's team before the season.

- Skellefteå I have to tip considering what you have seen, especially the second half of the season.

You have become better, but above all much tougher when you have brought in Melker Karlsson and become a team that approaches goals in a different way.

They could challenge for a Swedish Championship gold even if it will not be an easy series against Luleå, Renberg concludes.

The quarter-final series between Rögle-Frölunda and Växjö-Färjestad starts on Saturday, while Leksand-Örebro and Skellefteå-Luleå play their first matches only on Sunday.