Athletes confirmed that Al-Jazirah does not have a great advantage over Bani Yas in winning the Arab Gulf Football League title, after the return of "Abu Dhabi's pride" to the top of the table by beating Al-Wasl 3-2, and "Al-Samawi" tied with Sharjah 1-1 in the 23rd round. From the competition, to raise the island’s balance 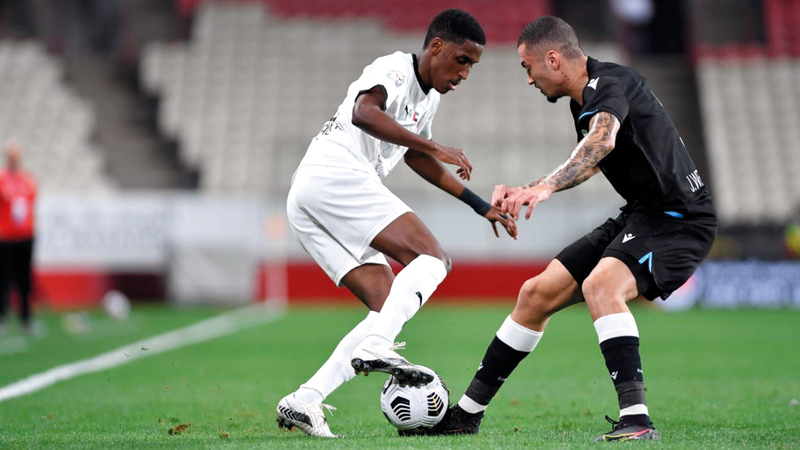 Athletes stress that the downtime, the "point" and the experience are in the interest of "the pride of Abu Dhabi."

Athletes confirmed that Al Jazeera does not have a great advantage over Bani Yas in winning the Arab Gulf Football League title, after the return of "Abu Dhabi Pride" to the top of the table by beating Al Wasl 3-2, and "Al Samawi" tied with Sharjah 1-1 in the 23rd round. From the competition, Al-Jazira raised its score to 50 points, compared to 49 points that Bani Yas has in his balance, indicating that the remaining matches for the island are not easier than the confrontations that Bani Yas will play in the remaining three rounds.

They told «Emirates Today» that the matches that Bani Yas will play in theory seem more difficult than the one that Al Jazeera will play, explaining that all matches will be difficult, especially since all teams will play the remaining three rounds and have specific goals, which may contribute to obstructing any of the two teams competing for the title. While they indicated that Shabab Al-Ahly might achieve a big surprise if he served the results, despite the difficulty of his position by moving away from Al-Jazeera leaders by seven points.

For his part, a former member of the Board of Directors of Bani Yas Club, Dr. Ahmed Al-Awadi, confirmed that the ease of matches that Al-Jazira will play compared to that which Bani Yas will play is not a measure of the results that the two teams will achieve. He said: “The matches in the last three rounds of the league will be very difficult, and for For example, in the next round, Baniyas will play with Al-Ahly youth, while Al-Jazeera will meet Ajman, but I see that (orange) has developed greatly in the past period, and he has a great desire to stay in the league, which increases the difficulty of Al-Jazeera's mission, while Al-Ahly youth will compete in the final. The Arabian Gulf Cup will play six matches in the AFC Champions League, which may affect his performance against Bani Yas.

He added, "Al-Jazira has the advantage of his experience in competing over the titles, while Bani Yas must withstand the pressure of the remaining matches, and despite this, (Al-Samawi) presented an exceptional season, and his tie with Sharjah is not considered a stumbling when the team gets a point from the defending champion at home."

He continued, "I see that Al-Jazira and Baniyas provided a lesson to the league clubs by relying on young players, and I expect that the identity of the hero will be determined in the final round of the competition."

In turn, the sports analyst and former Al-Jazeera player, Yusef Abdulaziz, said, “Al-Jazira has a 60% advantage compared to 40% for the Bani Yas team, and I think that if the focus is absent from the two teams, Al-Ahly youth may achieve a surprise and win the title, especially as it is the best team in Second half of the season ».

He added: “The difference in point gives Al Jazira a good advantage in dealing with matches, while the suspension period I think is in the interest of (the pride of Abu Dhabi) more than Bani Yas, especially since the level of Al Jazira has declined significantly in the past games, and this period will be a good opportunity for the technical staff. To amend the team situation and prepare players well for the next stage ».

He pointed out that Bani Yas deserves appreciation, stressing that Al-Samawi has strong chances to be crowned the title, indicating that the matches of the two teams are difficult and there is no difference in the type of matches each team will play.

On the other hand, sports analyst, former Al-Jazira player, Rakan Al-Ajami, said that the chances are equal between Al-Jazira and Baniyas in winning the league title, explaining: “Although Al-Jazira will play easier matches against Ajman, Al-Ain and Khorfakkan, but looking at each team, Al-Jazeera will face many difficulties against Ajman, who seeks to stay in the league, and Al-Ain maintains his name and position even if his results decline. As for Khor Fakkan, he will achieve great results, and he won over Al Jazeera in the first leg with three goals without a response.

Al-Ajami added: "I expect that the suspension period will have a great role in determining the identity of the league champion, especially as it is a good opportunity for each team to recover injured players, and to prepare players in general for the most difficult period of the season."

He concluded his remarks, saying: "The identity of the hero cannot be expected, after the past matches have witnessed many unexpected results, so the most focused and determined team will have the advantage in winning the league title."

Remaining matches for the two teams: