Lokomotiv beat Sochi on the road in the quarterfinals of the Russian Cup and made it to the next stage of the tournament. The main hero of the confrontation was Fyodor Smolov, who scored two beautiful goals. Southerners, on the other hand, had to spend almost the entire second half in the minority after the removal of Kirill Zaika. “Akhmat” also went further, which beat “Ufa” with a minimum score at home thanks to a goal by Evgeny Kharin. 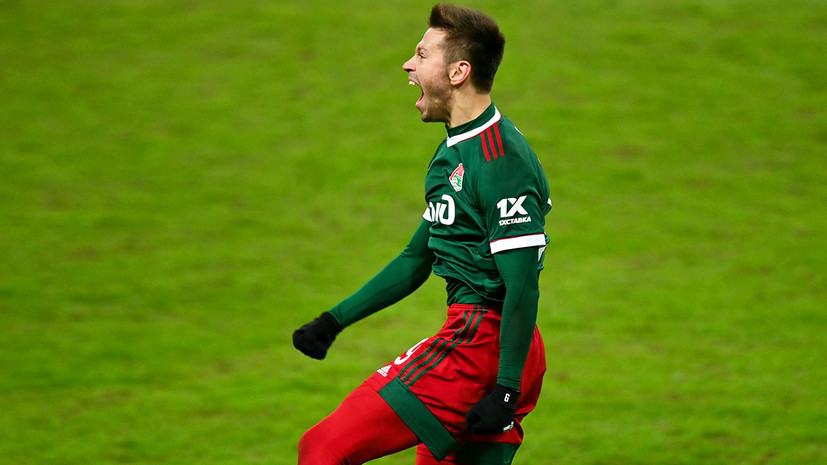 Lokomotiv's seventh win in a row

Lokomotiv in 2021 can be safely called the strongest Russian team.

After all, the railroad workers not only won five matches in a row in the RPL and climbed to third place in the standings, but also defeated Tambov and reached the quarterfinals of the Russian Cup.

There they were waiting for a much more serious rival in the face of one of the main discoveries of the current season - Sochi.

It is curious that the last meeting of the rivals took place only three weeks ago in the framework of the national championship, and Marko Nikolic's charges won - 3: 1.

Now they intended to achieve success on the road, and at the same time to take revenge from the southerners for the defeat at Fisht at the end of October - 1: 2.

Despite the fact that Lokomotiv is expecting the most important match with Spartak on Sunday, the coaching staff did not take care of the leaders and included all the strongest in the base.

Is that irreplaceable in the spring Francois Camano in the attack was replaced by Fedor Smolov, who recovered from an injury.

From the first minutes it became clear how both teams were going to succeed.

Sochi, as usual, relied on high pressure, and the guests - on quick attacks.

The hosts not only forced their opponents to make mistakes and lose the ball, but also won most of the rebounds.

However, this did not often lead to dangerous moments at the gates of Marinato Guilherme.

Although the southerners struck several shots on target, the naturalized Brazilian calmly coped with them.

At first, on the contrary, Loko did little on the other side of the field.

Smolov and Vitaly Lisakovich practically did not meet with the ball and did not threaten the possessions of the young Denis Adamov at all.

However, at the end of the first half, a rare counter-attack of railroad workers unexpectedly ended in a goal.

In this situation, Smolov played superbly.

After the removal of Vedran Chorluka, he burst into someone else's penalty area, tricked Ivan Miladinovich onto the lawn and shot perfectly into the far one from a sufficiently acute angle.

Adamov could not save his team, and Fedor scored the third goal after the season resumed and upset Sochi for the second time in less than a month.

The trouble did not come alone for the owners.

Immediately after the break, Kirill Zaika committed an optional foul on the flank and received a second yellow card.

Fedotov had to throw ex-Loko footballer Timofey Margasov into the fight and switch to a game with two central defenders.

But in the 63rd minute, the position of the southerners became almost hopeless.

After Maciej Rybusya's discount, the striker sent the ball into the far top corner with a strong blow from outside the penalty area.

Nikolic immediately decided to remove Fedor himself, Vedran Chorluka and Daniil Kulikov from the field, giving them a rest before the Moscow derby.

To the credit of the Sochi players, they did not let go of their hands and soon reduced the backlog to a minimum.

Moreover, the gate to Guilherme, as in the previous match between the teams, was struck by Artur Yusupov.

The midfielder was allowed to make a billiard shot into the near corner from outside the penalty area, and the guests' goalkeeper, who was conducting an excellent meeting, did not reach the ball.

The intrigue in this confrontation was revived, but the southerners did not have the strength to finish the bulk.

The appearance on the field of three strikers Maxim Barsov, Alexander Rudenko and Marko Dugandzic did not help either.

Moreover, in the 96th minute, the substitute Kamano managed to hit someone else's goal.

The hosts in full force, including Adamov, went to someone else's penalty area to serve the set, but lost the horse fight, and Krykhovyak threw his partner into a breakthrough.

Thus, Lokomotiv won the seventh victory in a row in all tournaments after the season resumed and reached the semifinals of the Russian Cup.

The first semi-final for Akhmat in 17 years

In another match of the day, Akhmat hosted Ufa.

It is curious that the guests came to the game without a head coach.

After a crushing defeat to Dynamo on Saturday, Rashid Rakhimov resigned.

The ex-footballer of Bashkortostanians Nikolai Safronidi, who had worked at the club's headquarters in recent years, brought the team to the meeting as an acting mentor.

On the other hand, Akhmat's footballers took to the pitch in excellent spirits, as they achieved the biggest victory in their history in the RPL over the weekend, scoring five unanswered goals against Krasnodar.

Now the fans of Grozny were waiting for the victory in the Cup.

It is not surprising that the hosts seized the initiative from the first minutes and led a siege of the enemy's gates.

However, the guests defended themselves rather calmly.

Andrey Talalaev's wards, one after another, made throws into the opponent's penalty area, which they coped with without any problems.

As a result, if the ball even reached Alexander Belenov, it was in not the most dangerous situations.

I remember only an episode at the beginning of the meeting, when Moritz Bauer, with difficulty in subcategory, blocked Bernard Berisha's shot.

Moreover, there was a suspicion that the Austrian played with a hand, but the judge Yevgeny Kukulyak, having watched the replay, did not appoint a penalty.

In the first half, Ufa defended reliably, but immediately after the break they unexpectedly conceded.

The defenders of the Bashkortostanians first allowed Miroslav Bogosavats to strike from outside the penalty area, and then failed to prevent Yevgeny Kharin from finishing the ball on target.

Only missing, the guests seized the initiative, and Safronidi threw two fresh attackers Timur Zhamaletdinov and Vyacheslav Krotov into the battle. And in the 67th minute, they missed, perhaps, the most dangerous moment for the team. The former CSKA striker went one-on-one with Vitaly Gudiev, but could not beat him, and the defender managed to block Krotov's finishing move. The goalkeeper of Grozny was reliable in other episodes. As a result, “Akhmat” calmly brought the matter to victory and for the first time since 2004 reached the semifinals of the Russian Cup.