Formerly this Brynäs coach Roger Melin, who won Swedish Championship gold with the club in 1999, questions Brynäs' actions to kick the coaching duo late in the season - and the choice of new coaches. - I think it's strange, says Roger Melin to SVT Sport. 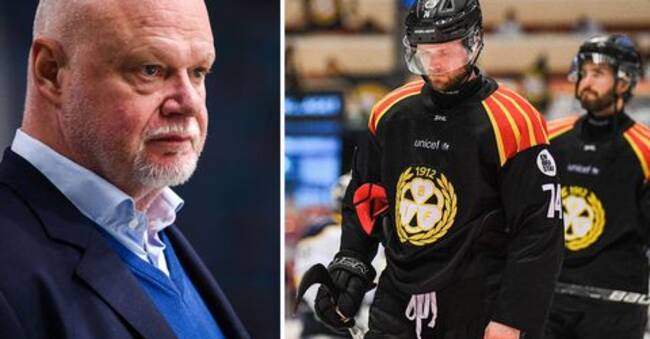 Strong winds have been blowing in Gävle and around SHL's second best Brynäs IF in recent weeks.

On the bus journey home from Oskarshamn last Saturday after the last regular season match, head coach Peter Andersson was informed that he had been fired.

- Considering that it was this late after the end of the series, I am quite surprised by the decision.

Normally it should have happened before.

It felt very strange before a qualifier, but they may have realized that there was no other alternative, says Roger Melin to SVT Sport.

Assistant coach Viktor Stråhle was also forced to leave the club and the next day Josef Boumedienne and Nils Ekman were presented as a new coaching duo.

- Strange which people have chosen to step in, I think.

There are two hockey people but they have no direct experience of leading a team.

It feels a little strange.

What can you miss in a situation like this when you do not have experience?

Every word you say you almost have to weigh before you throw yourself out.

But above all, it is important to have a body language that says that you believe in this yourself.

Have you been asked to take over as head coach?

On the other hand, I offered my services this spring, during the summer and at the beginning of the series, both to Sundlöv and Campese, to be a resource without payment if they needed to, to talk to the leadership troika.

But there has been no interest.

Or Peter has felt that he did not need to.

Sports director Michael Sundlöv reacted harshly after the coaches were fired - and resigned.

As a result, club director Michael Campese criticized the "leak" and the sports director then claimed that Campese was lying and lying on television.

The club has also decided to close the training sessions during the qualifying game against HV71.

"It's going to be tough"

Now Brynäs will enter the qualifying game against HV71 with an odd charge, to say the least, while the Jönköping team had plenty of time to prepare for the seriousness that will be decided in the best of seven matches and where the losing team plays in the Hockeyallsvenskan next season.

What do you think about the qualifier?

It's going to be tough.

There are two teams that have players who are skilled enough to win matches.

It depends a lot on who gets to have their players healthy and who dares to play, and that they think it's fun to play qualifiers.

You have to see it as an endgame and try to throw all negative emotions aside, says Roger Melin.

Only a miracle can save Brynäs from a negative qualifier against HV71.