MotoGP: Quartaro and Zarco on the highest steps of the podium, a historic French double

Fabio Quartararo (Yamaha) won the Doha Grand Prix in Qatar, second round of the MotoGP season, ahead of Johann Zarco (Ducati-Pramac) on Sunday. A first for the Tricolores. 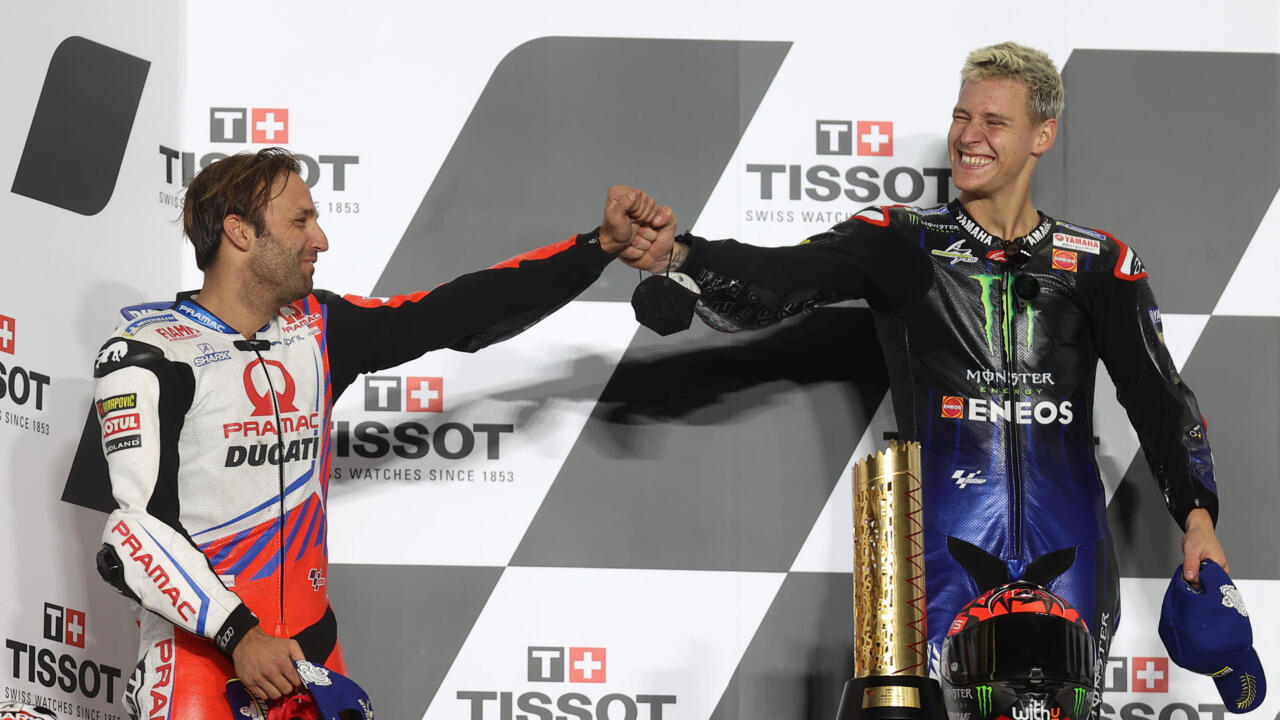 We have to go back to 1954, in Reims, to find traces of two Frenchmen on the same podium in the premier motorcycle category.

At the time Pierre Monneret had won the grand-prize ahead of a third Jacques Collot.

However, the performance of Fabio Quartararo (Yamaha) and Johann Zarco (Ducati-Pramac) Sunday April 4 in Doha is quite simply unprecedented with two Tricolors occupying the top steps of the podium.

In addition to the unprecedented sporting performance, we will remember the complicity between the two pilots, hilarious on the podium, screaming the Marseillaise at the top of their lungs with Zarco as conductor.

The Spanish debutant Jorge Martin (Ducati-Pramac), who had signed the pole position, completes the podium (his first in the elite for his second GP) on the Losail circuit.

Author of a "very mature" race, in his own opinion, Martin led up to four laps from the finish, when Quartararo passed him first.

Then Zarco did the same in the last few meters.

"I didn't win much [three times last season in MotoGP] but this victory, wow," blew the number 20, who intends to celebrate it with ... a McDonald's.

"I came up from eighth in the middle of the race. It's an incredible moment, I always dreamed of winning in Qatar!"

Zarco, leader of the general classification

The icing on the cake, Zarco (thanks to his two 2nd places in the two inaugural GPs in Qatar) leads the drivers' standings with 40 points, four lengths ahead of Quartararo, tied for 2nd on points with his Spanish teammate Maverick Vinales.

If this remains anecdotal so early in the season, it is very positive knowing that the two men changed teams during the winter.

"Arriving here for pre-season testing thirty-five days ago, I didn't expect that," admitted the leader, promoted from Ducati-Avintia to Ducati-Pramac.

"I'm leading the championship, but I still have things to learn and to better control. If I succeed, I will be able to have fun on other circuits," he said.

"We worked a lot during the winter to achieve this goal", added Quartararo, fifth last week for a first race with Yamaha which he considers to have managed "like a beginner".

The Spaniards Alex Rins (Suzuki) and Maverick Viñales (Yamaha), winner of the Qatari GP on the same track last Sunday, finished at the foot of the podium.