Al-Jazira returned to the top of the Arab Gulf League again, thanks to the great desire of its players to correct mistakes and win against Al Wasl, the stubborn team that has not lost since 12 games, to confirm Al Jazira that it is the best and deserving of the lead thanks to its semi-integrated squad led by scorer Ali Mbakh 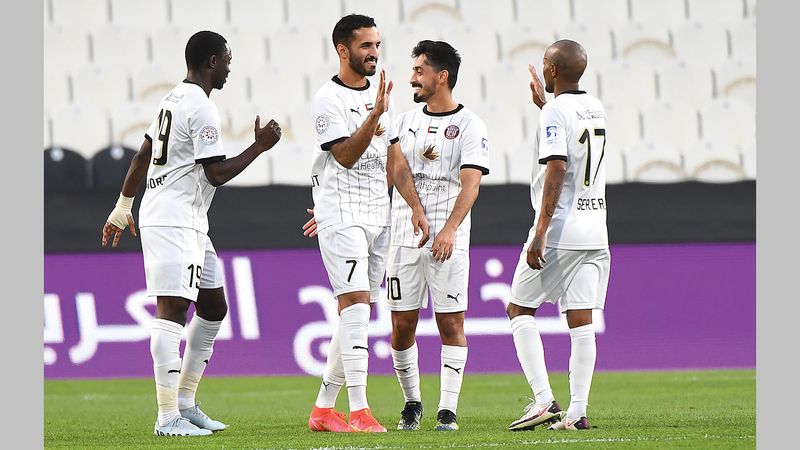 Khaled Obaid: An interesting tour .. The excitement at Al Qaa is no less than the top spot

Al-Jazirah defeated Al Wasl 3-2 and regained the top of the league.

Al-Jazira returned to the top of the Arab Gulf League again, thanks to the great desire of its players to correct mistakes and win against Al Wasl, the stubborn team that has not lost since 12 games, to confirm that Al Jazira is the best and deserving of the lead thanks to its semi-integrated squad led by scorer Ali Mabkhout, but the level of The team is wobbly, occasionally turning away from their strong performances and scoring hard-fought wins.

Bani Yas failed in the first lead test after he fell in a draw against defending champion Sharjah, which is a logical result of putting the two teams in the ranking table, but it did not benefit the two teams, as the owner of the land Sharjah lost third place in favor of Shabab Al-Ahly, while Bani Yas moved off the lead to return to Al-Jazeera. And there is still an awaited tour that will bring Bani Yas together with Al-Ahly youth, which will greatly contribute to defining the identity of the hero.

Al-Nassr woke up late. After it succeeded in achieving a victory over Sharjah, it came back to victory over Al Ain, and both teams had lost in front of them in the first round, while Al-Ain level was "an event and there is no embarrassment", as the team was out of service this season and the reasons are different.

The Al-Wehda team also continued its strange style in the fluctuating results, as it received a new loss against its guest Ittihad Kalba, the black horse, which made the Al-Wahadi fans wish that the temporary French coach Gregory, who succeeded in leading the team to two successive victories, continued.

The loss of Al Wasl does not diminish the achievement presented by Brazilian coach Hillman and his assistant Salem Rabie, as the team has not lost in 12 games, which is calculated for the coach and an ideal opportunity for a wonderful upcoming season.

The relegation struggle has become on a hot plate, Hatta bid farewell to the championship theoretically and needs a miracle of winning over Sharjah, Al-Ittihad Kalba and Al-Ain, as for the real conflict between Ajman and Fujairah, although the latter's opportunity is the best, given the preference for the remaining matches, and it will also host Ajman in a fateful match. .

Emirates Today asked a question about the public’s opinion on the island and the reason for the team’s decline in the team’s level despite its return to the top and its victory over Al Wasl, with a question on the social networking site “Twitter”: “Share with us the opinion .. What is the reason for the decline in the level of the island in the recent rounds despite his return to the top of the league The Arabian Gulf?

Three answers were monitored: the lack of experience of his players, the strength of the competitors, and the decline in the level of player Khalfan Mubarak.

During the voting, with the interaction of 190 participants, 46.9% of the voters chose the strength of the competitors, while 37.2% chose the lack of experience of its players, and the lowest percentage went to the reason behind the decline in Khalfan Mubarak's level by 15.9% of the participation rate.

For his part, sports analyst Khaled Obaid confirmed that he expected Bani Yas not to continue in the lead due to the strength of the remaining matches for him and the desire of all teams to win, indicating that he was sure of the return of Al-Jazeera to the top because of his strong performance from the beginning of the season, explaining that The team does present varying levels at times but is able to make a quick comeback.

Khaled Obaid told "Emirates Today": "A new enjoyable tour of the League in which we watched two very strong matches, the first that brought together Bani Yas with Sharjah and the second with Al Jazeera, and the results were logical, and the desire of Al Jazeera to achieve victory appeared to stop the series of positive results for Al Wasl." .

He added: "The round was not stronger than the previous rounds, but the excitement at the bottom was no less than the top, after Ajman woke up and succeeded in achieving a difficult victory over Khor Fakkan, and Fujairah failed again to maintain its progress, so that the next rounds remain extremely difficult for the rest of the teams." .